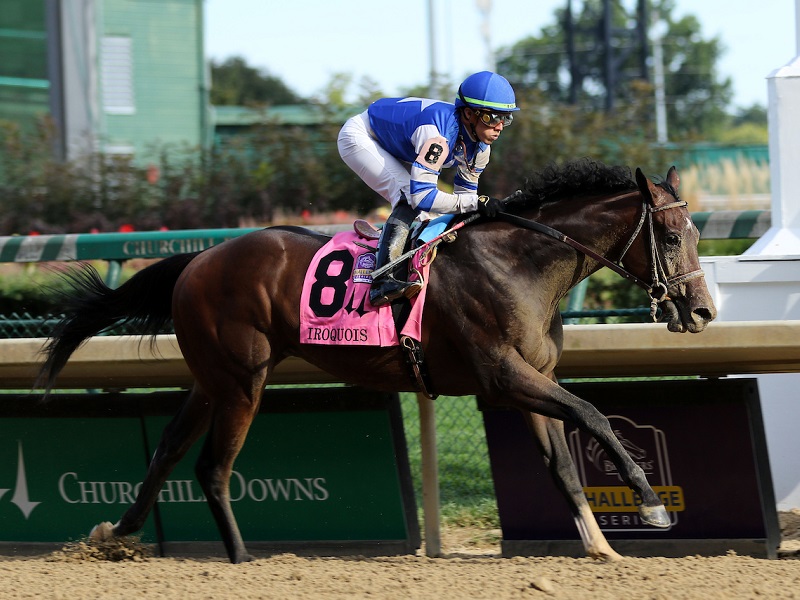 Back in my public school days, we had a thing called excuse cards. They were 3x5 notecards that were required to be filled out by parents on any missed day of school, therefore becoming an excused absence. Sometimes I was, in fact, ill; sometimes I was visiting Laurel, Pimlico or Bowie with my Dad for a matinee. It was a perfect or imperfect childhood, depending on your perspective.Of course the reason for absence never mentioned the daily double or a hot 10-1 shot we liked in the Form. No, our standbys were the usual: headache, stomach ache, fever. The point was that an excuse was required, and sometimes the most honest one simply can’t be scribbled.Following Saturday’s disappointing third-place finish by Tiz the Law in the Grade 2 Kentucky Jockey Club at Churchill Downs, handicapping parents are left with some uncertainty as to what to put on the excuse card this Monday morning. After all, this was supposed to be the Kentucky Derby winter book favorite after a Breeders’ Cup Juvenile that left the favorites’ tongues wagging and horseplayers’ heads scratching.The first option could be the sealed sloppy track. Both of Tiz the Law’s opening victories were on fast tracks and all of his published works dating back to Saratoga this summer had been on fast tracks. “Didn’t get ahold of the track,” often is first on the trainers’ playbook of post-race losing quotes. Perhaps it applies here.Option two could be that this was the first road trip for Tiz the Law. He ran out of his home stall at Saratoga and at Belmont in his maiden and Champagne victories. The travel to Louisville, new surroundings and situations (such as racing under the lights) were a first for him. He’ll get to develop that travel skill in Florida over the winter.The previously listed excuses are speculative at best. Who really knows how the horse handled the sloppy track or the environmental factors? Unless you are a horse whisperer, there’s really no way to be certain. Handicappers sometimes resort to accepting the uncertain with no other place to turn. But there are more conclusive evaluations worth exploring in this case.Consider the trip. Stuck down inside on a wet track behind horses is a certain recipe for taking a lot of mud. Midway on the clubhouse turn it became apparent Tiz the Law and jockey Manny Franco were having words with one another. The colt said ‘go’ and the rider said ‘whoa.’ Tiz the Law remained covered up behind 3 horses the entire backstretch run and with pressure to his outside and behind him. When the opportunity to fire presented itself with about 3/16ths of a mile to run, Tiz the Law just ran evenly and didn’t do much with it. He galloped out decently in his first try around 2 turns, just behind the winner Silver Prospector, a former turfer who has found his groove on dirt like War of Will and Omaha Beach a year ago.The trip wasn’t great for Tiz the Law, but it wasn’t awful either. If that’s THE Kentucky Derby favorite, he probably should win with that journey. On a similar thought, the bobbling start for Dennis’ Moment in the Breeders’ Cup Juvenile was plenty reason for his defeat. But if he is THE Kentucky Derby favorite, he has to at least run a little bit after the initial trouble.What we’ve last seen from Eight Rings, Dennis’ Moment and now Tiz the Law takes us into winter without a standout favorite in the crop. The likely 2-year-old champ defaults to Breeders’ Cup Juvenile 45-1 longshot winner Storm the Court. Of course, there’s not a long list of Juvenile winners with massive success in the Triple Crown series, so that position is about as secure as the opening round of musical chairs. The best 2-year-old I’ve seen remains the since-sidelined Breeders’ Futurity winner Maxfield, and we’re not even sure what’s really on his excuse card.