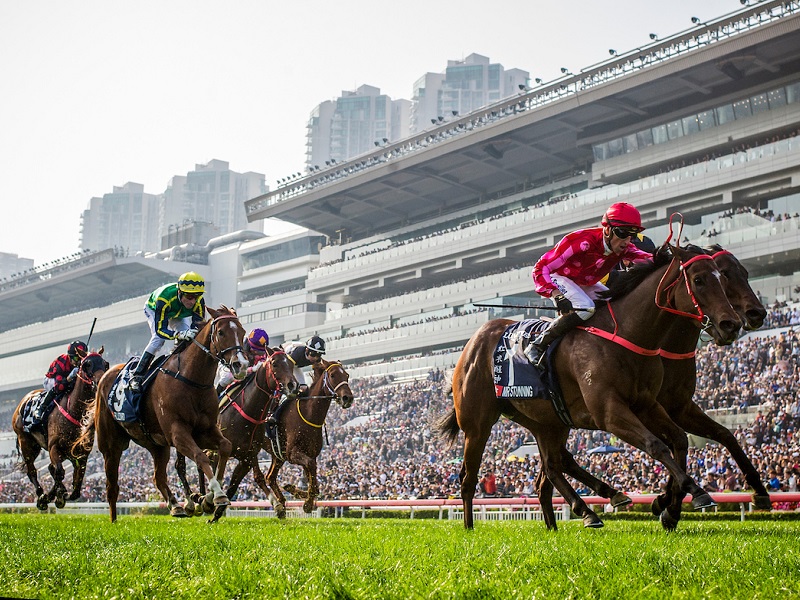 Get 10X XB Rewards Points when you bet these races with Xpressbet!

Race 1: Helene Paragon Handicap (2000m)
#4 London Hall has been racing well this season and if his form can hold up here, he’s going to be in the finish. He’ll need a race run to suit if he is to come from the tail of the field but the retention of Joao Moreira for this is a good push. #5 Villa Fionn steps out in search of his second win this season for leading trainer Ricky Yiu. He’s another who will get back and rattle home. #6 Above appears to only have limited ability but his two wins this season on the flipside have been no fluke. He’s drawn well and should get every opportunity for Silvestre de Sousa. #1 Magnetism was far from disgraced in Class 3 last time. Though, he’ll relish the return to Class 4 here with Zac Purton engaged.

Race 2: Armada Handicap (1200m)
#11 Eptiwins has had a number of chances across his career, tallying two narrow placings in the process without winning. He’s shown he has the ability and if he can find himself in a forward position under Tony Piccone, he’s going to go very close. #13 Little Thunder is another who has had plenty of chances but has also shown plenty of ability. Matthew Poon takes the reins for this fresh off a Wednesday double and a win here, wouldn’t surprise. #4 Sparkling Star has done well across two starts in Hong Kong, placing on debut for snatching sixth at his latest. #3 Power King is next best. He’s shown potential.

Race 3: Giant Treasure Handicap (1600m)
#3 Cheerful Leader steps out for leading trainer Ricky Yiu. He finished runner-up last start over this course and distance, displaying significant improvement from his first three starts. He would only need to repeat that effort here and in his favour is the booking of Joao Moreira. #1 Leap Of Faith has hit the ground running in Hong Kong, snatching two second place efforts from three appearances. He’s drawn well for Zac Purton and this race is suitable. #11 Gala Night has the ability but his consistency lets him down. He has the cheek pieces on for the second time here and if he can find his best, he’ll be thereabouts from the good gate. #5 Invaluable has shown steady improvement. He warrants respect once again.

Race 4: Fellowship Handicap (1400m)
#11 Vital Spring is already a winner this season and another win here, from the soft gate under Vincent Ho would not shock. He’s proven his capabilities in Class 4 previously and his recent consistency warrants respect. #12 Fantastic Show is looking to end a run of two second place efforts. He’ll get back to the tail of the field so the wide draw is no concern, he only needs a race run to suit. #1 Circuit Three returned a narrow second first-up as a 26/1 chance, rattling home from the tail of the field over 1400m. His eye-catching performance last start commands respect, especially if he can repeat it here. #2 Mighty Giant got off the mark impressively last time out for leading trainer Ricky Yiu. He’s not without a chance of repeating that performance, though, he’ll need to lug five more pounds on Sunday.

Race 5: The G1 Stewards’ Cup (1600m)
#3 Waikuku narrowly missed last start behind Admire Mars in the G1 LONGINES Hong Kong Mile. Prior though, he beat Beauty Generation twice, including in his G2 Jockey Club Mile score two starts ago. He’s a genuine star on the rise and he can cement his position as Hong Kong’s next big thing with a win in Sunday’s HK$10 million G1. #1 Beauty Generation has had his colours lowered on three occasions this season after winning 10 consecutive races, including five at G1 level. Still, although he’s lost his invincible aura, he’s still a champion who is going to fighting out the finish as he bids to win back-to-back Stewards’ Cups. #2 Rattan steps back up to a mile after his mid-career switch to sprinting which relinquished a G2 score last season and G1 placing at his final run following that. He’s been effective over the mile and the quick step up to that distance poses no threat, as this field falls away outside of the top two. #5 Furore is the reigning BMW Hong Kong Derby champion. He steps out over 1600m following a minor setback over Christmas. He can figure with the right run as he has the class, though, he’ll be more effective over 2000m in the future.

Race 6: Beauty Flash Handicap (1200m)
#6 Good Beauty closed rapidly last star to grab second over this course and distance. John Moore has racked up 29 seconds this season, the most of any trainer, but Good Beauty can change that here with a suitable run through under Grant van Niekerk. #4 Lockheed has been consistent without winning across his 20-start career. Although he’s costly, he’s worth considering due to his consistency and he should get the right run from gate 1 under Joao Moreira. #3 Cool Team got off the mark first-up this term. He’s been doing well in Class 3 since then and he’s proven his capability. #8 Super Fast steps out on debut Manfred Man. Zac Purton takes the reins here and his latest trial was encouraging. Must respect.

Race 7: The G1 Centenary Sprint Cup (1200m)
#2 Hot King Prawn has returned from his bout with colic in excellent order, a first-up second behind Aethero at G2 level, before notching up another second behind stablemate Beat The Clock in the G1 LONGINES Hong Kong Sprint. He comes into this with those two runs under his belt which suits and if he’s improved his condition from last start, then he’s the one to beat for Karis Teetan. #1 Beat The Clock was that winner of the Hong Kong Sprint and he’s looking for back-to-back wins in this race as well as a fourth career G1. Joao Moreira sticks aboard here and he’s going to get every chance to show his class. #3 Mr Stunning returned from a lengthy lay off to grab eighth first-up before his narrow fourth in the Hong Kong Sprint behind Beat The Clock. He was a winner third-up last season and he appears to have put all of his injury concerns behind him. He deserves respect. #4 Full Of Beauty comes out of the Hong Kong Sprint also. He’s drastically improved across his short 12-start career in Hong Kong, rising from Class 4 this time last year, to G1 level. He’s up to this and he can’t be discounted here.

Race 8: Good Ba Ba Handicap (1400m)
#8 Total Power displayed significant improvement last time out to grab fourth. He can progress further here with the added furlong on offer and the middle gate should afford him every opportunity. #11 Beauty Loyal has placed in his last two starts. He’s consistent and although the wide draw makes things tricky, he does get Joao Moreira in the hope of offsetting this. #2 Mongolian King grabbed second last time out. Zac Purton slots in the plate this time on the consistent gelding and with blinkers added for the second time, he should be able to go close again. #1 Follow Me won well three starts ago. He’s next best.

Race 9: Ambitious Dragon Handicap (1200m)
#10 Computer Patch got off the mark impressively last start. He backs up here again off that performance and although he steps up into Class 2, he’s shown that he has plenty of potential to offer and with only 114lb on his back, he’s going to prove tough to beat under Silvestre de Sousa. #6 Loving A Boom turned in a brilliant fourth last start, rattling home from the tail of the field at Happy Valley. He should be better suited at Sha Tin off that run, the wide spacious straight should suit him and he remains a winning chance with Zac Purton engaged. #11 Duke Wai is looking for his fourth consecutive win. He faces Class 2 for the first time which is always difficult and he’ll need to handle going around a bend, but, he’s gone to a new level this term and the low draw will afford him every opportunity. #4 Water Diviner is consistent. He warrants respect.

Race 10: Glorious Days Handicap (1600m)
#7 Everyone’s Joy flashed home to run a slashing third last start over 1400m. He steps up to a mile now which suits and although he’s drawn a touch awkward, he’s more than likely not going to settle in the worse part of the field before peeling out to give chase. #2 Smart Patch got off the mark first-up and has mixed his form since then before narrowly missing last start with Zac Purton engaged. He remains in the plate here and he only needs to replicate that run here to be in the finish. Lyle Hewitson has outperformed his odds on a number of horses of late and #11 Enzemble was one of these, rattling home last start to finish third at 149/1. Any further improvement will see him be ultra-competitive. #13 Such A Happiness is next best from the inside draw.