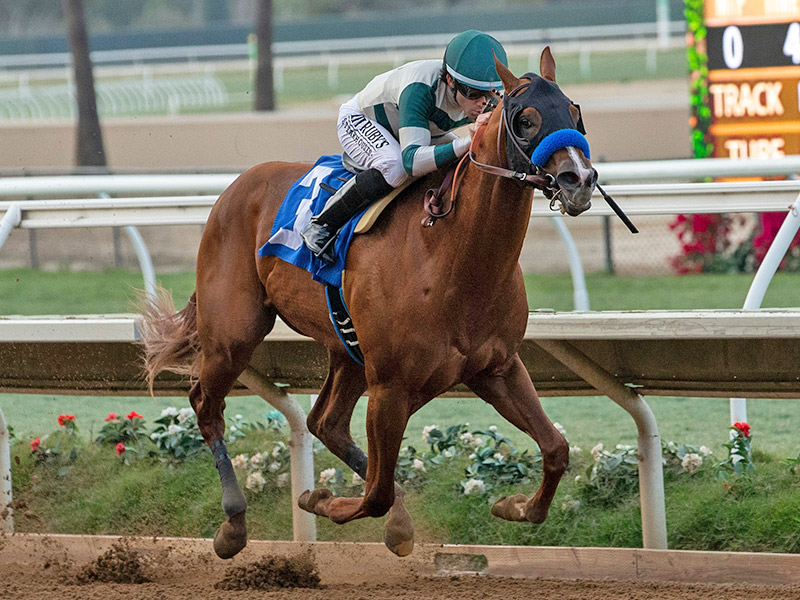 The 2020 Pegasus World Cup Invitational is a bit leaner than in past years--$3 million purse instead of $7 million—and hefty participant fees have been waived. Runners also will compete without medication, including Lasix. Another change is that this year’s version has a sponsor-- you guessed it—Runhappy!

Alterations to the conditions of what briefly was the world’s richest race, originally raised eyebrows. However, with the big day just one sleep away, anticipation fills the Hallandale Beach air. Ten runners now are schedule for the main event on a blockbuster card that also features 9 stakes--6 graded, including an overflowing field of 13 in the $1 million Pegasus World Cup Turf. Total purses are worth a stout $5.2 million.

Unfortunately, in the last 24 hours, Pegasus 2020 got even leaner when both morning-line favorite Omaha Beach and probable second choice Spun to Run scratched because of owies. The race already lacked a runners headed to Saudi Arabia for shots at a $20 million payday in the Saudi Cup. Topping the list of Saudi-bound absentees is 2019 Florida Derby winner Maximum Security and Breeders’ Cup Classic runner-up McKinzie trained by Bob Baffert.

Unlike with previous Pegasus World Cups, won by Arrogate, Gun Runner and City of Light, this year’s edition will not feature a seemingly unbeatable favorite. Mucho Gustso looks strong, but not nearly as powerful as those previous winners. That’s really good news for horseplayers looking to make a few bucks on the outcome of the race.

Below is the third iteration of one horseplayer’s analysis of the 2020 Pegasus starting lineup with morning line odds adjusted only for the scratch of Spun to Run. With Omaha Beach also out, expect odds on each entrant to be lower than posted—some significantly. Xpressbet’s Free Pegasus World Cup Wager Guide provides selections and much more for all of Saturday’s races, so make sure to access a free copy at Xpressbet.com.

1. True Timber - 15-1 - Bravo - McLaughlin
Trifecta players take note. Although this six-year-old runner hasn’t won a race since back-to-back allowance scores in 2018, he has finished third in his last three graded stakes—Gr. 2 Kelso, Gr. 3 Bold Ruler and Gr. 1 Cigar Mile behind Maximum Security. His best races have come while near the early pace. He figures to have company up front in here but while saving ground from the rail he may be able to add another in-the-money finish to his resume at a big price. Use him only for bottom Tri and Super slots, if you like.

2. Tax - 8-1 - J. Ortiz - Gargan
Claimed for $50k out of a first-start maiden win at Keeneland, Tax had a very nice early 3-year-old campaign that included a Gr. 3 Withers win and a Gr. 2 Wood Memorial runner-up effort. Those led to starts in the Gr. 1 Kentucky Derby (15th) and Gr. 1 Belmont Stakes (4th). He took the Gr. 2 Jim Dandy at Saratoga before finishing seventh in the Travers. Some time off led to a runner-up effort in the Gr. 3 Discovery at Aqueduct in November. He’s earned $828,300, a tidy return on investment for his owners, but he’d have to step it up a bit to win this one. He’s had his moments—five-for-five in the money at the distance--but this looks like a lower-end exotic candidate.

3. Diamond Oops - 15-1 - Leparoux - Biancone
He enters this race off a solid victory at seven furlongs in the Gr. 3 Mr. Prospector at Gulfstream. He’s also won the Gr. 3 Smile Sprint at six furlongs over this track and the $75k Buffalo Man stakes here in 2017. Overall, he’s won 5 of 6 starts at Gulfstream. The 5-year-old is a versatile performer that can run near the lead or from a bit off the pace. He has a Gr. 1 runner-up turf finish to his credit. He usually starts at double-digit odds at this level. He’s fit and likes the track, but the competition may be a bit too steep for him.

4. Seeking the Soul - 30-1 - J. Velasquez - Stewart
This 7-year-old horse is at the end of a $3.4 million career. He still got some spunk left in his bones, as a Jan. 17, bullet five-furlong work in a minute flat will attest. He won just one out of 8 starts last year—Gr. 2 Stephan Foster--and was second in this race to City of Light to begin the season. One of the few in here that will be coming from well off the pace. He should have many targets to run at, and that’s good, but the Gulfstream strip usually doesn’t favor closers. He and jockey John Velasquez will hope for a melt-down to occur up front. Think his best days are behind him and lower slots on Tris and Supers would be the best expectations.

6. Higher Power - 6-1 - Pratt - Sadler
This 5-year-old horse absolutely freaked in winning the Gr. 1 Pacific Classic in August at Del Mar. Before that he had optional allowance/claiming victories at Fair Grounds and Santa Anita, respectively. On the heels of his Del Mar triumph, he was a well-beaten third in the Gr. 1 Awesome Again and Gr. 1 Breeders’ Cup Classic, both at Santa Anita. He had an awful start in the former and broke slowly in the latter. His best performances have come when he’s on or near the lead, so the break is important. There’s plenty of speed in here, so even if he breaks well, he may be outrun early. A repeat of his Del Mar effort makes him tough, and the scratches of Omaha Beach and Spun to Run figure to help his chances. He’s a strong candidate for the exotics, especially Tris and Supers and has a puncher’s chance to win it.

7. War Story - 30-1 - Rosario - Dobles
You just ‘gotta love this 8-year-old gelding. He’s made nearly $3 million the hard way—he’s earned it in 38 lifetime starts. Eight wins, seven seconds and five thirds—add up to 20 career in-the-money finishes. And it doesn’t look like he’s quite finished, yet. Last out at Gulfstream Park, he won the Gr. 3 Harlan’s Holiday at nearly 13-1. In July, at Monmouth, he gamely won the Gr. 3 Monmouth Cup in a desperate battle through the lane. Those were his only two scores of the 2019 season. The Pegasus water is quite a bit deeper, but he’s sharp, has a win over the track, pace to chase and can handle the distance. He’s be a huge price in here, as he should be, but if the old warrior has a big one left in him, he could make them sweat late. Use him in bottom rungs of Superfectas.

8. Mr Freeze - 20-1 - Saez - Romans
This 5-year-old dual Gr. 3 winner is a front-running type that often hangs around for a share of the pot. His initial claim to fame came in the 2018 Gr. 3 West Virginia Derby, which he won by eight lengths. Recently, he won the Gr. 3 Ack Ack going a mile at Churchill Downs in September and followed that up with a second and third in the Gr. 2 Fayette and Gr. 1 Clark, at Keeneland and Churchill, respectively. Figure him part of an honest early pace and a possible inclusion in minor exotic positions.

10. Mucho Gusto - 9-2 - I. Ortiz Jr. - Baffert
He’s a 4-year-old, multiple Gr. 3 winner that finished second, less than two lengths behind Maximum Security and eight lengths in front of Spun to Run, in the Gr. 1 Haskell Stakes. ‘Gusto returned to finish third in the Gr. 1 Travers, behind Code of Honor. A lone disappointing September start in the Oklahoma Derby sent him to the sidelines until now. Originally aimed toward a Gr. 3 stakes race, Mucho Gusto has trained so vigorously, posting four bullet works at Santa Anita since Dec. 29, including a 1:11.3 move from the gate Jan. 16, that trainer Bob Baffert elected to shift sights toward a Pegasus bull’s-eye and a second victory in the race. Next start plans call for this one to head to Saudi Arabia for a shot at even bigger money. The colt figures close in the early going and, with the scratches of Omaha Beach and Spun to Run, must be regarded as the most likely winner. He’s no cinch in his first start against elders, but he’s the one to beat.

11. Tenfold - 30-1 - Gaffalione - Asmussen
This 5-year-old horse won once in 2019—Gr. 3 Pimlico Special--and was soundly defeated in his other graded-race starts. He would be a big surprise on the win end in here. A late-running style fits the race profile, but he’s had plenty of chances at this level and hasn’t succeeded.

12. Bodexpress - 30-1 - Jaramillo - Delgado
This 4-year-old colt had his 15 seconds of fame in the 2019 Preakness when he unseated jockey John Velasquez at the start and raced unencumbered around the oval. His adventure was captured on national television and he immediately became a minor celebrity. He must have enjoyed the limelight because he returned to win his next two starts at Gulfstream Park West against inferior competition. Most recently, he was third to Pegasus foe War Story in the Harlan’s Holiday at Gulfstream. He’s a speed horse, for sure, so look for him to be in the early mix. Breaking from the far outside means he’ll be sent from the gate to save ground into the first turn. He’s not proven at this level but did run well in the 2019 Florida Derby over this track as a fading second to Horse of the Year finalist Maximum Security. He will be on or close to the lead and could hang around for a placing at a big number.

Mucho Gusto is fresh and the absence of Spun to Run will help his cause in the early pace. He wasn’t quite a top level 3-year-old star, but he may have improvement in him. As noted, Higher Power has had challenges at the start in his last two races. He needs to leave with the field. While he shouldn’t be way back, he’ll need to close ground on the leaders and that can sometimes be challenging on the Gulfstream surface. If he breaks well, he’s got a real chance. Besides everyone, those that benefit most from defections are front-running or close-to-the-pace types Mucho Gusto, Bodexpress, Higher Power, Tax and Diamond Oops.