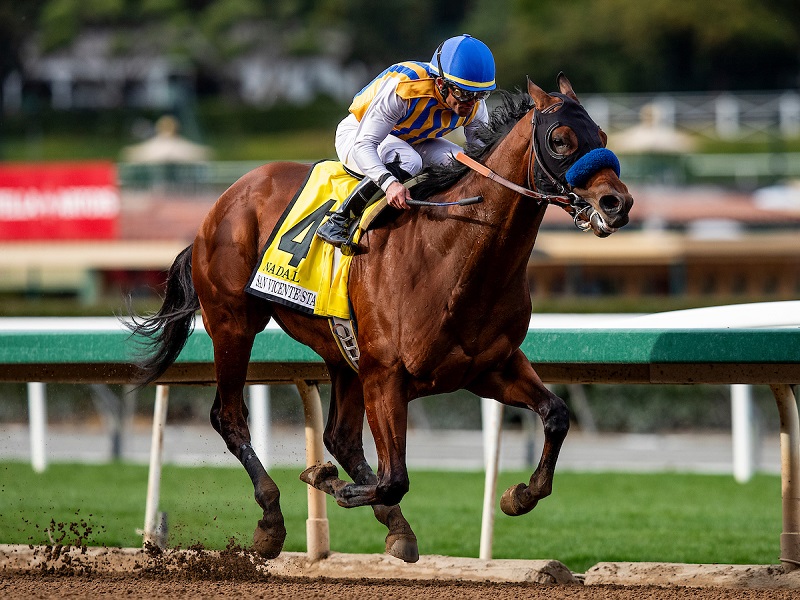 Each Monday, I’ll select my Most Valuable Pony from the previous week’s racing action around the country. Who won the week? It could be a breakout performer, a known stakes commodity or the horse lifting the most loot. Chime in on Twitter @Xpressbet with your thoughts on who should be each week’s MVP.February 3-9, 2020MVP: NadalOwner: George Bolton, Arthur Hoyeau, Barry Lipman and Mark MathiesenTrainer: Bob BaffertJockey: Joel RosarioPerformance: An eleventh-hour entrant into Sunday’s Grade 2 San Vicente at the time of entry, Nadal proved ready for the stakes leap in an impressive sprint performance. The 3-year-old son of Breeders’ Cup Classic winner Blame lived up to his debut victory hype by defeating five rivals, including reigning 2-year-old champion Storm the Court. Nadal went fast, blistering 21.81 and 44.09 opening quarters while dueling Ginobili, and remained clear of Cal Cup Derby winner Fast Enough and the aforementioned Storm the Court at the end of 7 furlongs. The public was all in at 3-10 odds.On Tap: Nadal will have 2 chances to earn his way to the Kentucky Derby if good enough, and Baffert said that first opportunity is scheduled to come in the March 14 Rebel Stakes at Oaklawn Park. The Rebel would be Nadal’s first trip around 2 turns. It’s a race the barn has won 6 times since 2010, including American Pharoah in his Triple Crown-winning campaign of 2015. Such a path could lead him back to Oaklawn for the Arkansas Derby or the Santa Anita Derby a week prior at the start of April.Honorable Mentions: Venetian Harbor stamped herself a serious Santa Anita Oaks and Kentucky Oaks player with her 9-1/4 length victory in Saturday’s Grade 2 Las Virgenes. Also, a couple of past MVP honorees were back in the winner’s circle on Saturday as No Parole captured the Premier Night Prince at Delta Downs to remain unbeaten (3-for-3) and Starship Jubilee won her 16th career race (10th at Gulfstream Park) in the Grade 3 Suwanee River Stakes.