Start of Something Big 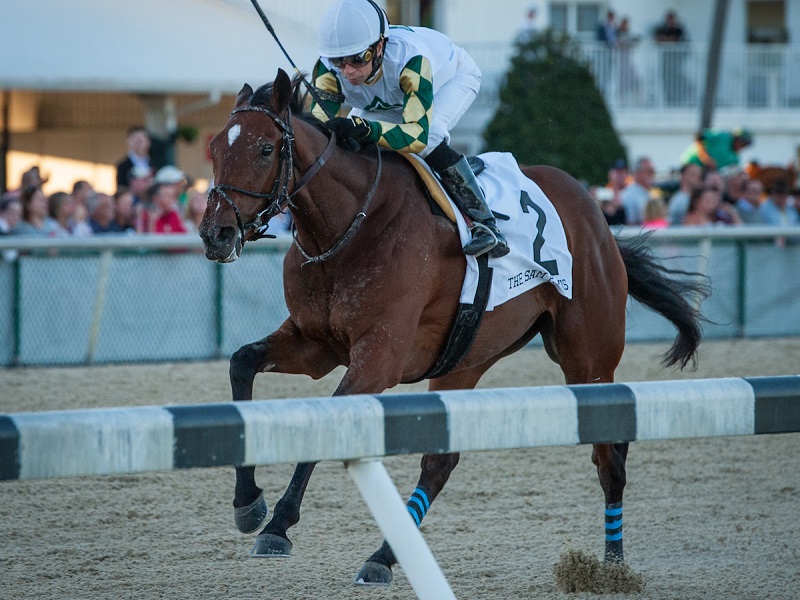 This past weekend felt like the start of something big—the journey toward horseracing’s premier annual event: The Kentucky Derby. Granted, as the thermometer on the wall reminds, we’re a couple of months away from the first Saturday in May. However, from now until the Arkansas Derby April 11, just about every winter weekend offers an opportunity for horses, horsemen and horseplayers to prepare for ‘the chance of a lifetime in a lifetime of chance.’

There were two such events Saturday (Feb. 8)—one at Tampa Bay Downs in Florida and one at Santa Anita in California. The former is the Sam F. Davis and the latter is the San Vicente. The Sam F. Davis is named in honor of the industrialist, University of Florida quarterback, team captain and Tampa Bay Downs track president. The race is a mile and one-sixteenth and often produces a Kentucky Derby contender or two. The event also awards points (10-4-2-1) toward a spot in the Louisville starting gate. The San Vicente, on the other hand, is contested at seven furlongs with no Derby points as reward at the conclusion.

Naturally, one would assume the former historically more productive than the latter, but that’s actually not the case. The Sam F. Davis has produced winners of the Tampa Bay Derby, but none in the Kentucky version. On the other hand, the San Vicente has produced four Kentucky Derby winners: Nyquist (2016), Silver Charm (1997), Swaps (1955) and Hill Gail (1952).

This year, in the Sam F. Davis, all eyes were on heavily favored and unbeaten Independence Hall. At the start, a pair of longshots No Getting Over Me and Tiz Rye Time, broke poorly. Independence Hall enjoyed a flyer out of the gate and then relaxed a bit for jockey Jose Ortiz into the first turn, giving way to Premier Star, venturing beyond seven furlongs for the first time, and Chapalu, wire-to-wire winner of Woodbine’s Grey Stakes. That pair hooked up on the lead and went a solid :23 1/5 for the first quarter.

The race’s challenging second quarter duplicated the first in :23 1/5 and suggested that the leaders were indeed rolling along. Down the backside, Independence Hall found an absolutely perfect spot behind dueling pacesetters, around 12 lengths in front of the next nearest competitor. He appeared eager to go, but not uncomfortable under Ortiz’ direction. A slower third quarter in :24 4/5 allowed Independence Hall to move to the leaders on the turn and, at the rider’s will, to inhale them in a few strides. Simultaneously, the rest of the field closed gobs of ground to reach contention, particularly, Solo Volante, leader of the second wave.

As the favorite entered the lane in control, it appeared the race was over. After all, the Grade 3 Big Apple-stakes winner had had things pretty much his own way throughout and appeared to be cruising. Solo Volante, on the other hand, had made such a long, determined run just to reach second position, it seemed likely he wouldn’t follow through on his threat.

In the sunny, windy Tampa stretch, whether Independence Hall slowed down (and if so, why?) or Solo Volante exploded, we don’t know for sure. Probably, as is usually the case, it was a bit of both. Either way, the winner looked solid as he roared home, giving the distinct impression that he’s the real deal and that added distance won’t be an issue. His past performance lines show an improving animal—maiden and stakes winner in two turf tries, as well as a third-place finisher in the one-turn, one-mile Mucho Macho Man at Gulfstream. He was third choice in the eight-horse Sam F. Davis field at $5.80-1.

As can happen this time of year, coming out of the race, there are more questions than there were going in. For example, is Independence Hall really all that and a bag of chips? He had no visible excuse in the race. How good is Solo Volante? Was this race a peak effort or merely a step toward better? As they say on TV, stay tuned.

Out west, the San Vicente was billed as the return of Breeders’ Cup Juvenile and Champion 2-year-old Eclipse Award winner Storm the Court. Just a few days before entries, though, Bob Baffert announced that he would start impressive maiden race winner Nadal in the race. That move turned what was supposed to be the Champ’s triumphant coming out party into an early season showdown between top sophomore prospects. In fact, Nadal’s presence in the race not only stole limelight from Storm the Court, but also a majority of wagering dollars.

Santa Anita morning linemaker Jon White instilled Nadal as the 4-5 favorite, but the colt amazingly started at just less than 2-5! In a distinct lack of support, Storm the Court drifted from a 9-5 morning line estimation to over 3-1. Some of that odds drift can be attributed to trainer Peter Eurton’s well-publicized pre-race musings that he viewed the San Vicente as more of a seasonal launching pad for Storm the Court than an immediate destination.

Nadal didn’t disappoint. Storm the Court may have. The former went to the front soon after the start, roared through :21 4/5, :44 and 1:09 fractions, repelled a serious bid from a determined Ginobili and drew clear to stop the timer in 1:22 2/5. It was an impressive, but not overwhelming performance. After the race, trainer Bob Baffert pronounced his horse ‘fit’ and said that he’d entered the San Vicente instead of working his colt out in the morning. If he’s correct that Nadal ‘needed the race,’ this colt will be a very tough out on the Triple Crown trail, especially in the March 14 Rebel Stakes at Oaklawn, his next planned start.

Those underwhelmed by Nadal’s triumph may have been a bit too demanding on the colt. After all, it was only his second lifetime start and he was hounded throughout by Ginobili, who appears a decent sprinter. As for Storm the Court, he may not have matured as much as the rigors of a sophomore campaign demand. He definitely was fortunate Breeders’ Cup day to find himself on a comfortable lead. While we certainly can’t hold that against him, Saturday afternoon the champ lacked a knockout punch.