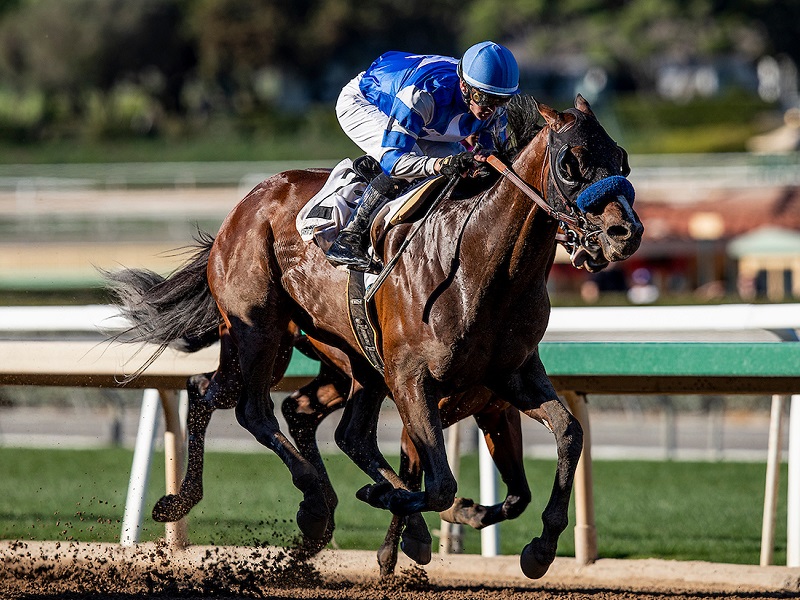 This first weekend in March features…count ‘em…not one, not two, but three races that are part of the Kentucky Derby Championship Series—San Felipe Stakes at Santa Anita, Tampa Bay Derby at Tampa Bay Downs and Withers at Aqueduct. Each offers Derby hopefuls shares of 85 points toward spots in the Louisville starting gate on first Saturday in May: First-50, Second-20, Third-10, Fourth-5.

Last Saturday, in the Fountain of Youth Stakes at Gulfstream, Ete Indien awoke with a dominating performance; favorite Dennis’ Moment slept through the race while morning-line second choice Chance It hit the ‘snooze’ button and scratched.

Ete Indien, the winner, last out had finished a well-beaten second to Holy Bull winner and Kentucky Derby Future Wager Pool 3 favorite Tiz the Law. This time, in the Fountain of Youth, he went to the lead from the far outside 10-hole under jockey Florent Geroux, maintained clear advantage throughout and then drew well clear in the stretch. A four-horse photo adjudicated second, with recent maiden winner Candy Tycoon getting the nod. Heavily favored Dennis’ Moment had no visible excuse under jockey Joel Rosario. Trainer Dale Romans advised drawing a line through the race as connections continue to entertain Kentucky Derby hopes.

Originally slated to start Saturday in the Holy Bull was choice Chance It, winner of four of six starts. He got unlucky at the post-position draw and was stranded in the far-outside 12-hole. Trainer Saffie Joseph agonized before ultimately scratching his charge from the race because of the horrible post. Chance It will try again Saturday on the opposite side of the Sunshine State in the Tampa Bay Derby from a more palatable post four of 12.

From a purely ‘hindsight-is-20/20’ angle, despite the poor post, Chance It might have had a real shot at winning had he remained in the Fountain of Youth. That’s a bold statement considering that Ete Indien romped home by more than eight lengths. Still, Chance It has enough speed so that he might have been merely two-wide into the first turn, perched just off the leader early and licking his chops in the garden spot. Then again, from there who really knows what might have happened.

Below is one horseplayer’s analysis of this week’s 3-year-old major stakes races:

This might be the very definition of a ‘small but select field.’ Only seven runners gather, but there’s a decent chance that one of the choices for the Kentucky Derby, if not the winner, could be lined up in here. That’s often the case this time of year when Bob Baffert runs out of options and has to begin matching his top colts against each another. Two of them are in here and they’re both unbeaten.

#4 Authentic parlayed a five and one-half length maiden romp into victory in the Grade 3 Sham Stakes. In the latter event he appeared to lose focus in the stretch and dipsy-doodled his way home. Didn’t matter at all. In fact, while he was playing around, he seemed to widen his advantage. Officially, stretch and finish margins were eight and seven and three-quarters lengths, respectively. He’s had plenty of time since the Sham and has worked well, including a bullet six furlongs in 1:12 4/5 at Santa Anita.

Baffert’s other starter #5 Thousand Words is three-for-three, including the Grade 2 Los Alamitos Futurity and the Grade 3 Robert B. Lewis at Santa Anita. He’s not speedy and flashy like so many of Baffert’s runners, but he’s as steady as a surgeon’s knife. Last time out, turning for home in the Lewis, he and jockey Flavien Prat needed racing room. They shoved their way out from behind the leader and went on to a three-quarter length tally over a closing Royal Act. Before that, Thousand Words claimed a neck victory in the Los Al Futurity and a mere one-half length triumph in a maiden race. In case you haven’t been keeping score, that’s three wins by a total winning margin of less than two lengths

Besides the Baffert runners, there are two other interesting San Felipe starters: #6 Storm the Court and #2 Honor A. P. The former is the reigning 2-year-old Champion who comes into this off a close fourth-place finish in the seven-furlong San Vicente Stakes won by the Baffert-trained Nadal. Storm the Court hadn’t been out since he won the Breeders’ Cup Juvenile Nov. 1 at Santa Anita. He could have needed a race in the San Vicente and the mile and one-sixteenth distance of the San Felipe should help his cause. He easily could have something to say about the outcome of this race, although he’s not as fashionable a choice as either of the Bafferts. It should be noted that jockey Flavien Prat, regular rider of both Storm the Court and Thousand Words has chosen the latter for this race.

#2 Honor A.P. is in development for Kentucky Derby-winning trainer John Shirreffs. He’s been sidelined since October when he convincingly won a mile maiden race. A number of questions surround, but connections—Shirreffs and Hall-of-Fame jockey Mike Smith—plus a promising maiden win give cause for hope.

Any other outcome on the ‘win’ end of this race would be distinct surprise. #3 Wrecking Crew has hit the board in an assortment of Grade 1 and Grade 2 races. They all came at two, and he’s finished behind both Thousand Words and Storm the Court

#5 Thousand Words gets the nod in here over stablemate #4 Authentic. The former’s experience tilt the scale in his direction, but if Authentic were to triumph it would be no surprise. There’s little edge in this race from a wagering perspective.

On paper this appears a clash between a pair of familiar opponents—2-1 morning-line favorite #7 Sole Volante and 5/2 second choice #4 Chance It. The pair met Jan. 4 at Gulfstream in the Mucho Macho Man where Chance It finished first by a head with Sole Volante third, more than two lengths back. That race was one mile around one turn and the layout probably favored the swifter Chance It. Saturday’s Tampa Bay Derby distance is a mile and one-sixteenth around two turns and, even though both runners have won around two bends, that layout should even things up a bit. Chance It has not raced since the Mucho Macho Man, scratching from the Fountain of Youth 12-hole last week. Sole Volante, on the other hand, returned to upset the Grade 3 Tampa Bay Derby over this track.

Trainer Todd Pletcher will send out three runners in search of a sixth Tampa Bay Derby win. #1 Texas Swing (12-1) and #5 Market Analysis (8-1) come off maiden victories—the former going a mile and one-eighth at Tampa in his second start and the latter in a first-out seven-furlong tussle at Gulfstream. #9 Unrighteous (20-1) is a maiden, but he was a solid second going a mile and one-eighth at Gulfstream last out in just his second career start. He adds blinkers Saturday. While none of these figures to pull off the outright upset, Pletcher runners must be respected in the exotics and they’re all decent prices.

#2 Spa City (10-1) will draw legitimate wagering attention. He’s improved for trainer Kiaran McLaughlin in three starts, including a one-length decision over #9 Unrighteous at Gulfstream last out. A solid five-furlong 1:00 4/5 Palm Meadows work since and the presence of local 23% winner jockey Daniel Centeno help his cause.

Between #4 Chance It and #7 Sole Volante, I’d lean to the former. He’s fresh, speedy, has a recent bullet four-furlong blowout at Gulfstream and will be ridden aggressively by jockey Paco Gonzalez. #7 Sole Volante has fired two big shots—Jan. 4 and Feb. 8--and may feel residual heat from those efforts. In exotics I’d use the Pletcher runners --#1 Texas Swing, #5 Market Analysis and #9 Unrighteous, as well as #2 Spa City and hope that morning-line favorite #7 Sole Volante misfires.

It’s doubtful any of these runners will figure prominently in the Kentucky Derby picture but, when the dust settles Saturday afternoon, one of them probably will have enough points to enter the Kentucky Derby starting gate. The most interesting Gotham entrant is #6 Mischevious Alex (spelling is correct, and also incorrect) from the John Servis barn. He’s the most experienced runner in the field with six starts, but his most recent—a powerful seven-length romp in Gulfstream’s Grade 3 Swale—hints at a reservoir of talent. Since blinkers were added he’s 2-0 with a nearly 10-length win in the Parx Juvenile and a seven-length Swale score. Come Kentucky Derby time distance really is the question with him, but that shouldn’t be an issue Saturday at one mile around one turn at Aqueduct.

Trainer Linda Rice has had an outstanding Aqueduct meeting and #8 Montauk Traffic, winner of the Jimmy Winkfield at Aqueduct Feb. 8, has accounted for two of the trainer’s 38 winners—a seven-furlong maiden score and the Winkfield at the same distance. Stretching out to a mile in the Gotham seems logical and attainable. Drawing a line through the colt’s first start when he dwelt makes him two-for-two and unbeaten horses always are dangerous. A bullet five-furlong breeze over the Belmont training track is a further indication of fitness.

#3 War Stopper woke up for trainer Rudy Rodriguez last out when blinkers were added, and he cruised to a four-length maiden score. He’ll need to repeat that effort to contend in here. #4 Attachment Rate starts for trainer Dale Romans off a solid, more than six-length maiden score over a ‘sloppy’ Gulfstream surface. He is improving and comes from off the pace, but he was dismissed at giant odds of 50-1 and 35.50-1 in two of his three starts. That lack of mutuel support makes one wonder if the maiden victory might have had more to do with ‘slop’ than talent. #10 Untitled was favored over #6 Mischevious Alex in the Swale, got bounced around at the start and didn’t fire. Trainer Mark Casse then uncharacteristically wheeled him back in 13 days to finish second to Gouverneur Morris in a Tampa Bay Downs allowance race. The cut back to a mile should help the cause.

Don’t see much other than an A-B-C type race. In other words, #6 Mischevious Alex looks best with #8 Montauk Traffic the most logical threat.  No real exotic combos jumping out.

While these three pre-Kentucky Derby skirmishes may not offer much wagering value, supporting cards at Santa Anita, Tampa Bay and Aqueduct are chock full of outstanding mutuel opportunities. Don’t miss them.