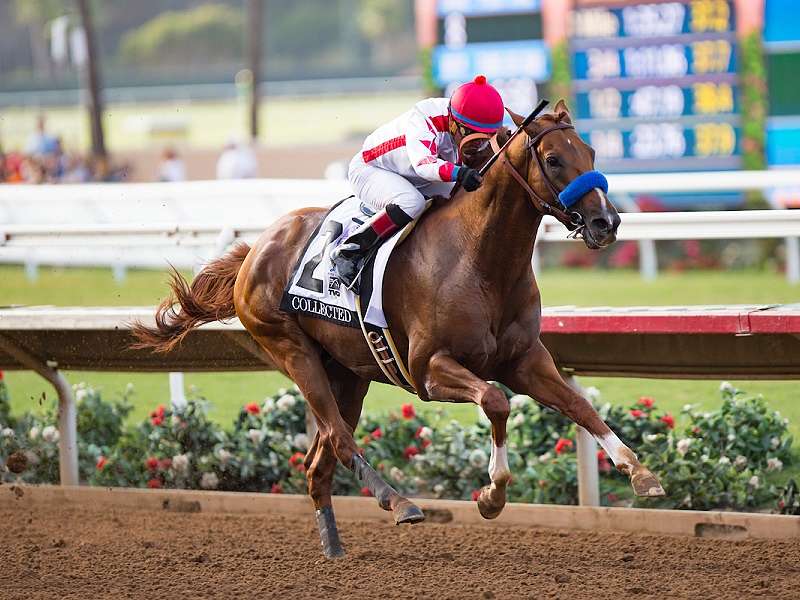 Bob Baffert collected his fifth Pacific Classic victory when Collected led past every pole in the 1 1/4-mile event. Not only that, the Hall of Fame trainer finished one-two in the Grade I, $1 million event. The $1 Baffert exacta, combining Collected and Arrogate, paid $9.60.

I wrote last week that a number of tantalizing questions would be answered in this year’s Pacific Classic. In particular, these are how the four questions that I posed regarding Arrogate were answered:

--Will Arrogate regain his top form and crush his foes, just as he did in the Travers, Pegasus World Cup and Dubai World Cup? Answer: No.

--Is Arrogate going to get the victory, but have to battle for it? Answer: No.

--Will Arrogate get beat again, but at least run decently in defeat this time? Answer: Yes.

--Is Arrogate going to struggle and lose by a big margin, as he did in the July 22 San Diego Handicap? Answer: No.

But at least the Arrogate who ran in the Pacific Classic was a whole lot better than the Arrogate who lost by 15 1/4 lengths when he finished fourth as a 1-20 favorite in Del Mar’s Grade II San Diego Handicap on July 22.

In this year’s Pacific Classic, with Collected beating Arrogate, it was Baffert beating Baffert. But even though the trainer had just won a $1 million race, he looked like he had just found out he was going to have to pay a visit to the dentist.

While there are those knocking Arrogate for now having lost two straight, another way to look at it is to consider what would have happened if Baffert had not elected to run Collected in the Pacific Classic. Early in the Del Mar meet, Baffert had planned to run Collected in a grass race. But when Collected began training like a beast on Del Mar’s main track, Baffert changed his mind and decided to run him on the dirt in the Pacific Classic.

When Arrogate got beat in the San Diego, he never really even got involved early. Consequently, after Arrogate brushed the side of the gate at the beginning of the Pacific Classic, Hall of Fame rider Mike Smith hustled him right away. The goal was to get the Arrogate “into the game early” this time, a strategy that worked.

Whereas Arrogate was 4 1/2 to 5 1/2 lengths off the early pace in the San Diego, he raced just a length or so off the lead through the first half-mile of the Pacific Classic while third behind Collected and Accelerate. The preliminary fractions in the Pacific Classic were a moderate :23.76 and :47.19.

After the first half-mile, Arrogate found himself three to 3 1/2 lengths behind pacesetter Collected despite Smith riding Arrogate aggressively. As the field rounded the far turn, Collected had a short lead, with Accelerate breathing down his neck. It now had become evident this was not going to be a race in which Arrogate dazzled. Indeed, it appeared Arrogate was in deep water and the 3-5 favorite probably was not going to win, as noted by track announcer Trevor Denman during his call of the race.

“Arrogate’s having to be ridden again today,” Denman said. “He’s doing better than last time, but he’s still not comfortable.”

Turning into the stretch, while much attention understandably was focused on what Arrogate was or was not doing, Collected shook away from Accelerate to open a clear advantage. Collected passed the eighth pole leading by 2 1/2-length advantage.

Even though Collected seemed to be weary toward the end of the Pacific Classic, his final time was a very good 2:00.70. He was assigned a career-best 115 Beyer Speed Figure. This was the best Beyer by a Pacific Classic winner on dirt since Candy Ride posted a 123 in the 2003 renewal.

Collected has won all four of his starts this year. Prior to the Pacific Classic, he won three in a row at Santa Anita Park -- the Santana Mile on April 1 (101 Beyer Speed Figure), Californian on April 22 (104 Beyer) and Grade III Precisionist (111 Beyer).

These are the Beyer Speed Figures for the winners of the Pacific Classic going back to the first running in 1991:

Earlier this year, while Arrogate was on his way to winning the Group I, $10 million Dubai World Cup after a dreadful start, track announcer Terry Spargo proclaimed him “the Man o’ War of the 21st century.” Baffert said after that race that Arrogate was the best horse seen since Secretariat. And what has occurred after such lofty praise? Arrogate has lost both times he has raced.

It’s just that so darn much is expected from Arrogate these days after he set the bar high Beyer-wise in light of his 122 in last year’s Travers Stakes, 120 in last year’s Breeders’ Cup Classic and 119 in this year’s Pegasus World Cup.

Though Arrogate did not win the Pacific Classic, he did manage to beat Accelerate for the first time. Accelerate weakened in the stretch and finished third, 4 1/2 lengths behind Arrogate. It was the first time Accelerate had raced farther than 1 1/8 miles. He now will be pointed to the Grade I Breeders’ Cup Mile rather than 1 1/4-mile BC Classic, according to his trainer, John Sadler.

Arrogate earned $200,000 for finishing second in the Pacific Classic, boosting his career bankroll to a North American record $17,302,600. California Chrome ranks second on that list with lifetime earnings of $14,752,650. Arrogate is the third-wealthiest Thoroughbred of all time, behind only Orfevre and Gentildonna. These are the five richest:

Going into the Pacific Classic, despite Arrogate’s defeat in the San Diego, he was No. 1 on the Longines World’s Best Racehorse Rankings for 2017 as of Aug. 6. Australian superstar Winx was No. 2, Gun Runner was No. 3, Enable was No. 4 and Ribchester was No. 5.

While Arrogate got beat in last Saturday’s Pacific Classic, Winx made a sensational 2017 debut the same day by overcoming a horrible start to win the Group II Bob Ingham Warwick Stakes at about seven furlongs at Royal Randwick.

“Winx surged down the stretch and outran the field to finish,” the Bloodhorse reported. “The mare’s final 600 meters was clocked at :31.98, the fastest seen at Randwick. She crossed the wire first in a final time of 1:21.87. It was a show of determination, sustained speed, and will to win of a champion.”

It was Winx’s 18th consecutive victory. The 6-year-old Australian-bred Street Cry mare now has won 22 of 28 lifetime starts. Street Cry, of course, also is the sire of American fan favorite Zenyatta, who won 19 of 20 career starts. Zenyatta reeled off 19 straight wins before losing the Grade I BC Classic by a head to Blame in 2010 at Churchill Downs.

I think the best racehorse in the world right now might well be Enable, a 3-year-old filly who trounced a stellar group of males when a 4 1/2-length winner in the Group I King George VI and Queen Elizabeth Stakes in England on July 29. John Gosden has said Enable is the best horse he’s ever trained. That is saying a lot. Keep in mind Gosden has won important events with the likes of Royal Heroine (BC Mile), Raven’s Pass (BC Classic), Benny the Dip (Epsom Derby), Golden Horn (Epsom Derby, Prix de l’Arc de Triomphe), Dar Re Mi (Dubai Sheema Classic) and Bates Motel (Santa Anita Handicap).

Enable is scheduled to race in England on Thursday in the Group I Yorkshire Oaks. She currently is the future book favorite for France’s prestigious Group I Prix de l’Arc de Triomphe at Chantilly on Oct. 1.

Here is this week’s poll, (first-place votes in parenthesis):

Collected has moved into the Top 10 this week after being No. 12 last week. Baffert trains four of the Top 10 -- Arrogate, Collected, Mor Spirit and Abel Tasman.

On July 12, Collected was 20-1 in the odds at the Wynn Race Book in Las Vegas for the BC Classic at Del Mar on Nov. 4. Arrogate was the even-money favorite, with Gun Runner next at 7-1.

This Saturday’s Grade I, $1.25 million Travers has attracted a terrific field of 12. For the first time since 1982, the Travers will bring together three different winners of the Triple Crown races -- Always Dreaming (Kentucky Derby), Cloud Computing (Preakness Stakes) and Tapwrit (Belmont Stakes).

Conquistador Cielo was sent away as the 2-5 favorite in a field of five. Gato Del Sol was the 4-1 second choice, with Aloma’s Ruler 5-1. Runaway Groom went off at 12-1, while Lejoli was the longest shot at 14-1.

Runaway Groom, with Jeffery Fell riding, rallied from last to prevail by a half-length in 2:02 2/5 and paid $27.80 to win. Aloma’s Ruler finished second, followed in order by Conquistador Cielo, Lejoli and Gato Del Sol.

In Runaway Groom’s most recent start prior to the Travers, he won the Prince of Wales at 1 1/2 miles on turf at Fort Erie. Earlier in the year, he finished second to Son of Briartic in the prestigious Queen’s Plate at Woodbine.

Despite Conquistador Cielo’s defeat in the Travers, he was voted 1982 Horse of the Year, mainly due to his victories in the Grade I Met Mile against older horses on May 31 and Grade I Belmont Stakes just five days later.

Here is how I am picking the Travers: