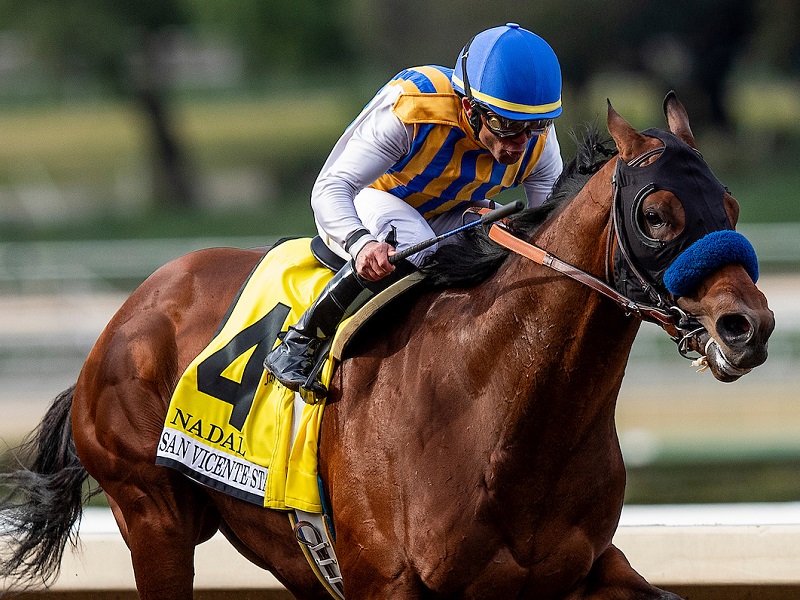 Below is one man’s horse-by-horse analysis of the Rebel Stakes with a suggested wager.

1. Nadal
Baffert/Rosario 5/2
He’s the probable race favorite off two wins in two Santa Anita tries—an impressive maiden win and a Grade 2 San Vicente score. In the latter, at seven furlongs, he dueled with Ginobili, a talented sprinter, through torrid early fractions and had enough in the tank to hold that one (and everyone else, including 2-year-old Champ Storm the Court) safe. It’s always dangerous to put all of one’s wagering eggs into a single equine basket that hasn’t yet gone two-turns, but when Hall-of-Fame trainer Baffert is the one holding the basket, concessions are made. Nadal’s clearly the one to beat. Jockey Joel Rosario probably will hustle Nadal to the lead and save ground throughout while having plenty for the stretch run.

2. Excession
Asmussen/Baze 30-1
The least regarded of three Steve Asmussen-trained runners in here, Excession will be making his ninth start. He lists a maiden victory to his credit but has finished seventh and eighth in his last two starts against graded stakes competition. A win would be a huge surprise. Any chance he might have would be helped by a fast early pace to compliment his closing style.

3. Basin
Asmussen/Castellano 3-1
One of two in here making an initial 3-year-old start. Basin’s record is solid, although it lacks two turn experience. Otherwise, a nose second first out in mid-June at Churchill is the only thing keeping Basin from being unbeaten in three starts. After a Saratoga maiden triumph, Basin absolutely dominate the Grade 1 Hopeful Stakes at the Spa. He hasn’t been seen since. Connections probably figure that a start Saturday and a return in the Arkansas Derby will be enough to have him prepared and in the gate on the first Saturday in May. Basin’s works have been serious for a trainer who doesn’t normally ask for much in the morning—a :59 1/5 five furlongs on February 25, and a 1:12 on March 2, both at Fair Grounds emphasize the point. This son of Liam’s Map was touted in this corner as a suitable option in the Kentucky Derby Future Wager Pool 2 at 39-1 odds. He appears to have the right style for this—just off the pace---now let’s see if he can make that critical developmental step from two to three.

4. Silver Prospector
Asmussen/R. Santana, Jr. 7/2
Plenty of experience in his corner, as this will be his ninth start. He’s won three of those, including the Grade 2 Kentucky Jockey Club at Churchill Downs and the Southwest at Oaklawn last out, His style is to come from off the pace and he should have plenty to chase in here. Trainer/jockey onnections couldn’t be better than Asmussen/Santana, Jr. Silver Prospector doesn’t usually draw much attention at the windows—5/2 is the shortest price he’s ever been and he’s never been favored. Because of his talent, style and connections he has to be respected in here as a serious in-the-money player.

5. No Parole
Amoss/Talamo 8-1
Here’s an interesting runner. He’s a Louisiana-bred who’s been odds-on while facing fellow bayou-bros in three races. He’s unbeaten, untied and unscored upon—never behind another horse at any call. In those three races, his winning margins total 34 lengths! How good is he? Tradition predicts that these types almost always have a hard time staying afloat in deeper waters. Is this Violence colt an exception to the rule? We’d have to go against him. Foes he will face Saturday are different animals than he’s previously conquered. Still, he adds intrigue (and some pace) to an already interesting race.

6. Three Technique
J. Englehart/L. Saez 7/2
Here’s one of those talented types that seems just a bit below the top of the crop. He’s got two wins in five starts, with two seconds. Last out, in his first stakes try in the Smarty Jones, He was a reputable second behind Gold Street—a foe he meets again in here. Three Technique has been popular with horseplayers and favored in each of five starts, never more than 2-1. That streak ends Saturday as the water gets much deeper for him. He tries, though, and may be ignored on the tote. Could be a sneaky exotic play.

7. Coach Bahe
Bauer/Sanjur 30-1
This son of Take Charge Indy broke his maiden in the mud last out in his third start. He adds Lasix for this race. Off such a limited resume he ought to be a huge price.

8. American Theorem
Papaprodomo/Pereira 6-1
The other runner making a soph debut in the Rebel, this son of American Pharoah has a maiden win and a runner-up finish to his credit. The latter came against Eight Rings in the Grade 1 American Pharoah at Santa Anita, six lengths behind the winner and two and one-quarter lengths in front of the eventual 2-year-old Champ Storm the Court. He was being pointed toward the Breeders’ Cup Juvenile, but an issue prevented him from running. That’s not much history to go on, so horseplayers are left guessing. He has been working well at Santa Anita. If you’re looking to embrace a new face, this could be your guy. As we saw in the Tampa Bay Derby last week, horses making their first starts at three sometimes can show amazing development. The difference between that race and the Rebel, however, is that the competition in this event runs much deeper. Also, being drawn in the outside number eight post position doesn’t help.

Bottom Line:
#1 Nadal, clearly, is the one to beat. He is trying two turns for the first time, but he’s got the rail, speed, a top jockey and Hall-of-Fame trainer in his corner. Lots to like. #4 Silver Prospector is the most logical runner-up. He’s got a nice mid-pack style and likes the track and distance. Two new faces in here #3 Basin and #8 American Theorem are interesting exotic ticket options. #6 Three Technique is a consistent, hard-trying sort.

Last Saturday marked the end of the 15th season of Xpressbet’s Beat the Host handicapping competition. Scott Shore won the $5,000 top prize in the Championship event and led all players with $194.50 in earnings based on 10 $5 win wagers in competition races. Karla Hilbert was second with $181.50 in earnings and collects a $2,500 prize. John Voyda finished third at $175 for a $1,500 additional payoff. Darrell Mirro rounds out prize earners with $166.50 in earnings good for a $1,000 prize.

Shore was fourth halfway through Saturday’s event, briefly took the lead, and then rallied from second in the final race to claim the top prize. #1 She’s Our Charm won the ninth race from Santa Anita and final competition race to return $29 for a $5 wager. Hilbert also used that score to advance from fourth to second and Voyda moved from sixth to third. Darrell Mirro, who led into the final race, held on for fourth.

Perhaps, though, this season’s Most Valuable Player award should go to Kevin McFarland. He won two weekly awards at a $1,000 each. It’s rare enough for a player to win two shares of weekly prizes in a single season. One of the outstanding features of Beat the Host is that prizes are so widely distributed.

This season, Beat the Host had 51 different prize winners, with none of the top four in the Championship Round having previously won a prize. Just one of the top four cumulative earnings finishers had previously won a share of a weekly prize—Stephen Stange was third Feb. 1. And, just one Sweep the Host prize winner also had won a share of a weekly prize—Bruce Barton finished second Feb. 22.

Xpressbet would like to thank everyone that played Beat the Host and remind you that, in addition to additional handicapping tournaments presented in conjunction with Santa Anita, the next Xpressbet competition is Xpressbet LIVE Saturday, March 21. Registration is free and begins March 16, 2020.