Eva London looking like a good one at Gulfstream Park 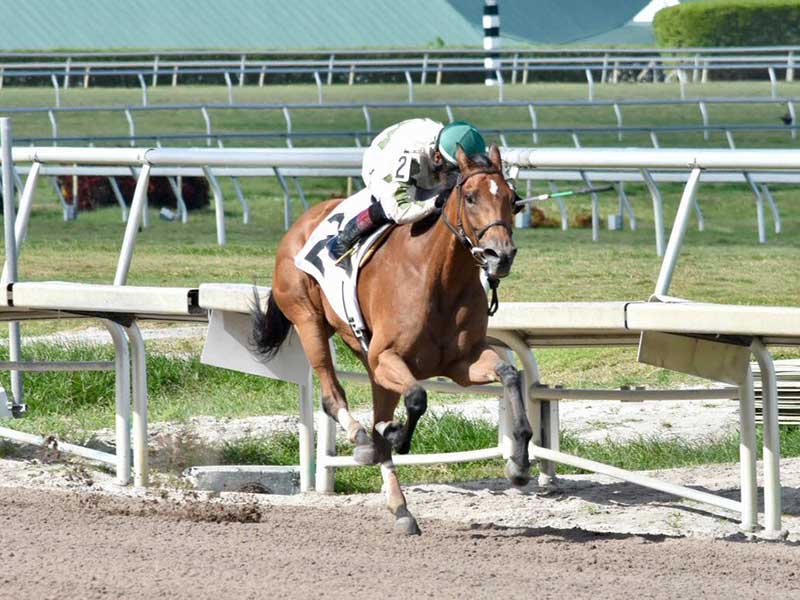 Gulfstream Park’s Championship Meet has been done for a while now, and while the many of the power stables have moved onto summer ports of call, there’s still plenty of talent to make Hallandale Beach worthy of attention.

There remains some alluring talent “on campus.” Look no further than Eva London, a swift Adios Charlie filly. The 4-year-old should be tough on her rivals in the Musical Romance Stakes at seven furlongs on Saturday. She’s 5-to-1 on the morning line but could be lower than that when then enter the starting gate. Angel Penna, Jr., took over the training of the Hardacre Farm’s runner prior to her last start and she responded with a seven-length win in an allowance optional claimer. The fractions for the mile race were legit (:23 2-5, :45 4-5 and 1:10 2-5) and she was right there shortly after the start, put on the pressure, and ultimately drew clear.

It took three starts for the Florida-bred filly to really get her legs beneath her. She broke her maiden two races back in front-running style and then followed with the impressive score last time.

If you think the talent left town, think again. As impressive as she’s been over her last two, Eva London’s chore will not be simple. Gerald Bennett-trained Royal Jewely (7-2) is a veteran of the Florida stakes races, often alternating between Gulfstream and Tampa.

Hola Charlotte, also trained by Penna, blasted optional claimers going 6.5 furlongs last time and reported home in a speedy 1:16. She stretches out a half-furlong today and could be in a pitched battle with her stablemate.

Eva London is certainly worth a play at 5-1, probably even so at a much shorter price. The filly can run and if she can score here, expect her to show up in some major races for distaffers up and down the East Coast.

The Christmas Past Stakes also is on the card Saturday at Gulfstream and it could be time for the Leo Azpurua, Jr.-trained Somethingelse to get that illusive first stakes win. She has just missed in her last two, with a second and a third, and drew favorably for the 1 1-16th-mile test on the turf. If you can get the 7-to-2 morning line price on the Leroidesanimaux filly, you’ll be getting a bargain.

Lone Star Park will garner some attention as Bob Baffert brings in Danzing Candy for the Gr. 3 Lone Star Handicap on Sunday. The Twirling Candy colt has not won a stakes race since the 2016 San Felipe and most recently won an optional claiming test at Santa Anita.

With Baffert and Hall of Fame jockey Mike Smith invading Grand Prairie, Texas, you can expect a short price on this one. Danzing Candy will start out 7-to-5 on the morning line, while Texas Chrome is expected to get his share of support and is 9-to-5.

This probably won’t come easy. Only four others dared to enter, and two of those – Shotgun Kowboy and Texas Chrome – are anything put pushovers. Shotgun Kowboy (4-to-1), owned and trained by C.R. Trout, won a couple of tough optional claiming races at Oaklawn and is up to nearly $900,000 in earnings.

Calling the upset here with Texas Chrome, trained by J.R. Caldwell. Texas Chrome was second to Mor Spirit in the Steve Sexton Memorial here. Mor Spirit, of course, is also from the Baffert-Smith combo, and Texas Chrome will try to get even with that powerful outfit.

Texas Chrome, a son of Grasshopper who races for Keene Thoroughbreds, looks like he’s getting back his legs. After a ninth in the Breeders’ Cup Classic in November, he came back with a sixth in the Oaklawn Handicap. He perked up with his second in the Sexton and overall has won three of four, with one second, over the Lone Star strip.