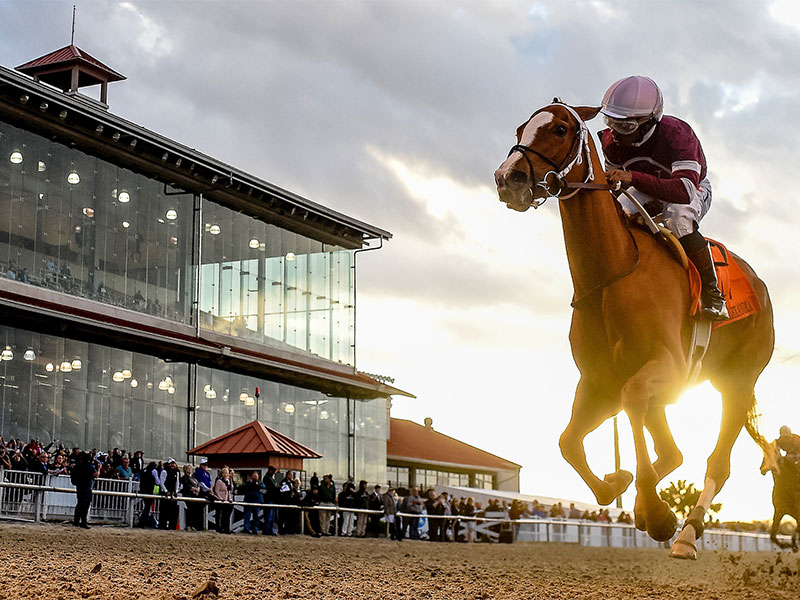 With the Kentucky Derby now rescheduled and to be contested Saturday, Sept. 5, traditional 3-year-old prep races must be viewed differently. No longer are they stepping-stones toward an approaching destination. Now, they must be handicapped as valuable, stand-alone events.

Scheduled major 3-year-old races still award coveted points toward stalls in the Derby starting gate but, reportedly, additional opportunities to accumulate Derby points will be offered this summer. That renders current estimates of a ‘required’ points total moot. And that’s just one of the many questions surrounding this unique first-Saturday-in-September scenario.

The Louisiana Derby, to be contested Saturday at one mile and three-sixteenths at the Fair Grounds, is a fabulous example of a rich, prestigious 3-year-old race that can stand on its own, removed as a signpost on a now detoured road to the Kentucky Derby.  An overflowing field of 13 runners with two also-eligible starters will chase a $1 million purse. Below is one man’s horse-by-horse analysis of the Louisiana Derby lineup with suggested selections:

Trainer Greg Foley reports that this son of Ghostzapper has improved with each race and that statement is supported by the colt’s form. A well-beaten third, first out in a sloppy Churchill maiden sprint, he won next out at Fair Grounds around two turns. That January effort propelled him to a start in the second division of the Gr. 2 Risen Star. After a wide trip, he managed to finish second. The addition of top jock Joel Rosario suggests that this one could be live. He’s still a bit green, but the distance should be no issue. Give him a look at a decent price.

This son of Goldencents won the first two starts of his career—a sloppy Churchill maiden race and a first-level allowance/optional claimer. In his third start, he was fourth in the second division of the Gr. 2 Risen Star. Mailman Money is a slow-maturing, big, long striding colt. His appreciation for the distance could be a question, but his form is solid. He’s not out of the picture.

This guy has plenty in his favor: He’s drawn inside; has speed in a race where there isn’t much of that; has a hot rider who’s recently been successful going to the front with mounts for a trainer who’s hitting at a 25% win rate nationwide. Last out, this son of Lookin At Lucky set the pace in the Southwest Stakes at Oaklawn Park before being outrun late by Silver Prospector. That race was this colt’s first start out of four contested over a ‘fast’ track. His trainer was impressed by his final prep breeze of 1:01 1/5 at the Fair Grounds and says distance won’t be an issue. If he’s 8-1 at post time, yours truly is either going to win or lose a bundle.

Purchased for a whopping $2 million as a 2-year-old, this grey/roan son of Tapit has been favored in each of his four starts. That streak ends Saturday. Last out, he finished second by a mere neck in a first-level allowance race. He’s taking a substantial step up the ladder in here to face GR. 2 foes. He broke maiden in a New York state-bred mile race at Aqueduct in December. Hall of Fame jockey John Velazquez replaces Asmussen regular Ricardo Santana, Jr. in the irons. Santana continues aboard #13 Silver State, another Asmussen starter.

This Louisiana-bred will carry the Pelican State’s flag postward. He won his last start over fellow state-breds in an allowance race. These should prove much tougher.

One of two Brad Cox entries in this race, this son of Into Mischief has won two of three starts with improving Beyer Speed Figures. A bit of further improvement is all that’s needed to compete here. His maiden victory came on Fair Grounds turf and was followed by an allowance/claiming score on Fair Grounds dirt. According to his trainer, the distance of the race and Shake Some Action’s pedigree are positives. One drawback is his lack of early speed.

A lightly raced son of Pioneerof the Nile, he won the second start of his career at Churchill Downs at a mile and one-sixteenth. His first 3-year-out start produced a fourth placing in an allowance/optional claimer at Fair Grounds. While his Beyer Speed Figures have improved with each start, he still would need to improve quite a bit in here to threaten. Add him to the roster of runners that come from well back in a seemingly pace less field.

Two turf starts at age two—a maiden mile win first out and a fifth placing in the Eddie Logan Stakes, also at one mile—led to a try in the Grade 3 Robert B. Lewis on the Santa Anita main and a solid, mere three-quarter length defeat by Thousand Words. That was a good effort, his first in blinkers, and, while Thousand Words subsequently disappointed in the San Felipe, that foe was considered a major Derby contender at the time of the Lewis. Royal Act’s trainer says connections have a lot of hope for the American Pharoah colt and that he’s needed maturity. If that’s true, with just three races in the vault, there could be more positive stuff to come. Since his Feb. 1 last race, Royal Act has worked out seriously, with three six furlong and one five furlong moves. Jockey Abel Cedillo is not a household word, but, as those who watch SoCal racing regularly will attest, kid can horseback. Royal Act can be reasonably close to whatever pace develops in the Louisiana Derby. Anything near that 10-1 morning line will look attractive.

This grey or roan colt by Tapit never has raced less than a mile and one-sixteenth in five lifetime starts. In fact, he began his career in a Saratoga maiden race going a mile and one-eighth. That day, he showed no speed but closed well to be a solid fourth behind Enforceable, who will line up directly to Portos’ right in the gate Saturday. It took Portos three more starts to break maiden but when he did it, he did it right. He won a sloppy Aqueduct event by nearly 11 lengths. That led to a start in the Gr. 3 Withers where he again closed ground late to be a solid third. Trainer Pletcher says this guy needs pace and suggests that the colt, hopefully, will show more speed Saturday. Jockey Irad Ortiz, Jr. currently is one of the hottest riders in the nation. This colt seems like a ‘must use’ in any exotic considerations.

He’s the lukewarm 7/2 morning-line favorite and that alone screams ‘wide-open event.’ This son of Tapit has made eight starts, the last two at Fair Grounds in the Gr. 3 Lecomte--which he won--and the Gr. 2 Risen Star--where he was raced wide and finished second. He needs a decent early pace to do his best because he’s got no early speed and a steady running style. There doesn’t seem to be much early speed in here and that could make his task difficult. He’s honest, will have no trouble with the distance, and should be respected in here as an in-the-money player with a ‘win’ chance.

A mere length and one-quarter behind Modernist in the second division of the Gr. 2 Risen Star, this son of Cross Traffic set a reasonable pace before losing steam in the lane. There’s not much speed in here, so that should help his chances. Before the Risen Star he won a first-level allowance race at a mile and one-sixteenth at Gulfstream. Others seem more attractive wagering propositions but he should be in a decent spot close to the leaders when the real running starts.

Following a Churchill Downs maiden score and an optional claiming tally at Fair Grounds, Lynn’s Map was shipped to Oaklawn Park for a shot in the Smarty Jones at one mile. He forced the pace there before fading. Last out, he was far back early and very wide but continued to run on. He finished sixth, beaten four lengths. Assistant trainer David Carroll reports that the Liam’s Map colt is doing “really well.” Jockey Tyler Gaffalione, who rides Saturday, was aboard the colt for his maiden victory. He’s a longshot that needs some pace help and will need a fortunate trip to make a statement in here. Bottom rung exotics a possibility.

He’s started in both major sophomore Fair Grounds stakes—runner-up in the Gr. 3 Lecomte to Enforceable and third in the Gr. 2 Risen Star behind the now injured Mr. Monomoy and Enforceable. Hall of Fame trainer Steve Asmussen explains that Silver State is a big horse that needed racing. He’s now had four lifetime starts and a sparkling 1:11 3/5 work March 9 under the hood. Trainer Asmussen and jockey Santana click at around a 20% clip, so this guy should get plenty of attention in the wagering. He’s another capable runner that comes from back in the field, so he’ll need to close ground in the lane. It should be noted that his Beyer Speed Figures fit well in here and that each one has equaled or surpassed the previous number. He must be considered as an in the money threat and respected as a possible ‘win’ candidate.

This steadily improving son of Uncle Mo shocked the second division of the Gr. 2 Risen Star when he scored at nearly 13-1. That tally came on the heels of a mile and one-eighth maiden win at Aqueduct over a ‘good’ track. His division of the Risen Star was slower than the other one, so there’s a bit of a question about his ability. Each of his victories have come with him on or forcing the early pace. There isn’t much speed on board in here, so he might enjoy another comfortable trip. He’s got a horrible post position, but a long run to the first turn helps, so he might be able to get over and save some ground. It’s unusual for a horse to go from a maiden score to a Grade 2 triumph, but it’s even more unusual for a horse to parlay two such wins into a third. Probably will take a slight stand against this one repeating his surprising Risen Star effort.

He’ll need a scratch inside the body of the race to get into the gate and then he’ll have to break from the outside. He’s been described as a free-running colt that’s steadily improved. Last out he was fifth, four lengths behind Modernist in the second division of the Gr. 2 Risen Star. He’ll need to do much better to cash in here.

He will need two scratches to get into the body of the field. Even then, he’ll have to break from the far outside and that will make things more difficult. Fresh off a Tampa Bay maiden victory, this son of Quality Road finished fourth in first division of the Gr. 2 Risen Star. A quick pace would aid his cause. He’s not totally out of the picture, but that post would be a killer.

Bottom Line: There’s not much early pace in here, so #3 Wells Bayou ought to experience a cherry trip from a cozy inside post. Assumption here is that #11 Ny Traffic and #14 Modernist have enough speed to force the early issue a bit. The former adds blinkers, too, so that should add pace. What happens early will decide what happens late. #14 Modernist ought to be comfortable sitting just off the pace if the inside pair go swiftly. There are several fit and talented runners in here that could upset or complete exotics. Most dangerous of those could be #8 Royal Act, as he should be closest of the closers to the early leaders. #1 Major Fed must be respected from a ground-saving trip in mid-pack. #13 Silver State and #10 Enforceable should be closing, too.