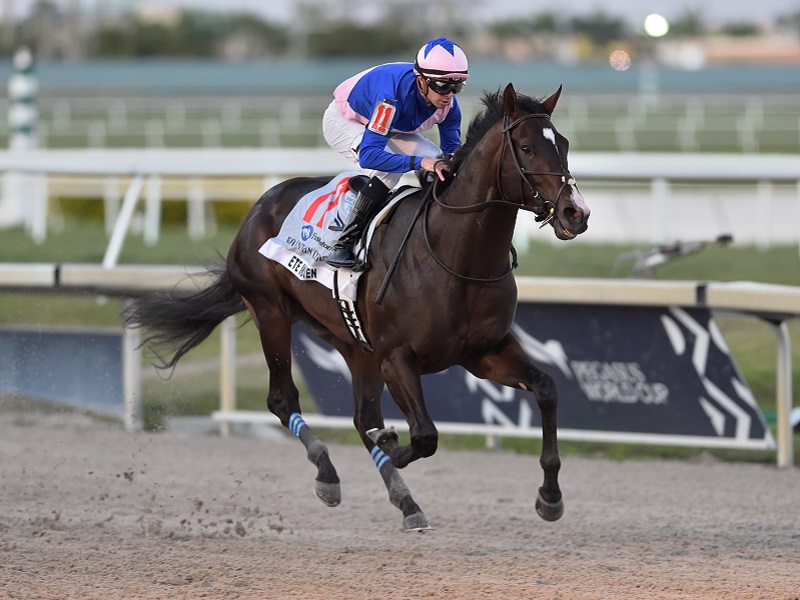 Historically, the Florida Derby has been a fruitful tree from which to pluck Triple Crown success stories. However, present times suggest an uncertain future that, undoubtably, will result in a unique 2020 Wikipedia section. The world is in the throes of a pandemic, the likes of which citizens of the world haven’t experienced since the Spanish Flu of 1918.

Silence abounds; neighborhood streets, playgrounds, offices, restaurants, and other small businesses are empty. Sports arenas, normally thundering with the roar of tens of thousands of fans, are muted. Baseball, the National Pastime, has been banished to the dugout before the games even began in earnest. The Masters and Kentucky Derby, two traditional and beloved rites of spring, have been postponed to who knows when and September 5, respectively.

Thoroughbred racing, in certain locations dotted across the nation, has continued, but the sand in those hourglasses may be running out. Racing’s been the only game in town for weeks, satisfying a national need for entertainment and providing an outlet for gamblers experiencing a March Madness jones.

At this writing, in a classic example of irony, Santa Anita Park, the racetrack that politicians, animal activists and media members demanded be shuttered nearly a year ago due to a rash of horse deaths, is one of a very few businesses currently operating in the entire state of California. Mickey in Anaheim has ‘Gone Fishing.’ Universal Studios is deserted. Knott’s Berry Farm hasn’t been this quiet since Walter and Cordelia peddled their first batch. Santa Anita, along with The Stronach Group’s Golden Gate Fields, stand as the state’s only operational entertainment venues—grandstands eerily empty, but action delivered to a sports-starved nation via television and the Internet.

There was some doubt about whether or not Gulfstream would be able to present this season’s Florida Derby card. There probably still is. As late as Thursday, it was announced that Jockey Javier Castellano, scheduled to ride Saturday at Gulfstream, has been confirmed as having asymptomatic Covid-19. He has not ridden at Gulfstream Park since March 15 and, obviously, will not be permitted to ride Saturday. We send our best wishes to Castellano, always a class act, and to his family. Politicians would like to see the track closed. Some argue that racing in Broward County is a violation of a ban on groups of more than 20 in one location. We’ll leave that to track and state officials to sort out. For the moment we’ve got bigger fish to fry. We must sort out a very interesting Florida Derby and solve a $2 million or so mandatory payout in the Rainbow Six. In stressful times like these, diversions are important and this is ours.

Here’s one man’s horse-by-horse analysis of the Florida Derby:

1. As Seen On Tv (Breen/Lopez) - 12/1
Never worse than third in five career starts, this son of Lookin At Lucky finished a well-beaten third to #12 Ete Indiene last out in Gulfstream’s Grade 2 Fountain of Youth. He took decent play that day and started at 2.80-1. He really didn’t have much excuse for not following through better in the lane. Perhaps he didn’t handle two turns in his first attempt? This is a deeper field and his 12-1 morning line odds suggest that. Still, he’s been a steady in-the-money player every time and he’s got one race to suggest he’s better than his last. Worth inclusion in exotics.

2. Shivaree (Nicks/Jaramillo) - 30/1
This guy has been a sprinter, and a Grade 3 placed one at that. There’s no indication he will do any real damage in this field at a mile and one-eighth. He’s got three wins and a pair of seconds in his last five starts. Tough customer, but we can’t see him carrying his talent effectively around a mile and one-eighth.

3. Disc Jockey (Joseph Jr./Gaffalione) - 20/1
He’s won two of three starts, including a second in a $60k stakes last out. This will be his first try around two turns. Talk about going from the frying pan into the fire. He broke maiden for a $35k tag and was haltered by current connections—the cagey owner Frank Calabrese and the successful trainer Saffie Joseph. Again, he’s a talented one-turn runner being asked to go two turns against Grade 1 foes. Big ask.

4. Soros (Delgado/Prado) - 30/1
He upset the one-turn, one-mile Smooth Air Stakes for his first victory in just his second lifetime start. That was back in November, so he’ll be fresh for this race, but he may be short on conditioning. Let’s watch one off the layoff before backing him.

5. Gouverneur Morris (Pletcher/Velazquez) - 8/1
Strongly favored in three lifetime starts, he’s got two wins and a second on his limited resume. He broke maiden by nine lengths at Saratoga in September (the runner up came back to win). The Grade 1 Breeders’ Futurity saw him break from post 10 of 10 going a mile and one-sixteenth at Keeneland in October—a tremendous disadvantage. He still finished second, five and one-half lengths behind the highly regarded Maxfield. Off until Feb. 14, the son of Constitution then stalked the early pace in an allowance/$75k optional claimer at Tampa Bay Downs and drew clear going a mile and 40 yards. He’s a developing animal, the dangerous kind at this time of year, and his trainer excels at having runners peak in these early spring races. Expect him to be just off whatever early pace develops. He must be respected, and 8-1 odds seem too good to be true.

6. Ajaaweed (McLaughlin/Saez) - 20/1
He finished a disappointing and well-beaten third in the Grade 3 Sam F. Davis at Tampa Bay in his last start. Before that he was second in the Grade 2 Remsen and fourth in the Grade 1 Breeders’ Futurity—hence his 3.30-to-one price in the Davis. The son of Curlin (Hunch Players Note: This is the Curlin Florida Derby) comes from off the pace and that’s not usually the way to win at Gulfstream. He’s already successfully been the distance and that’s a plus, but he’ll need to go much better than he did in the Davis. He’s useable in lower exotic rungs.

7. Tiz The Law (Tagg/Franco) - 6/5
He’s the Florida Derby favorite and probably the most highly regarded colt in the nation. Three wins in four starts will do that. His only loss came in the Grade 2 Kentucky Jockey Club and that was by just three-quarters of a length with some trouble. His last victory, and only start of 2020, came in the Grade 3 Holy Bull when he bested today’s second choice #12 Ete Indien by three lengths. Tiz The Law was a talented two-year-old who won his first and only start at three in impressive fashion over the Gulfstream surface. Can he win this race? Absolutely. Should you wager on him? Absolutely not. What often happens during this time of year is that while some horses are improving by the minute, others remain the same. Tiz The Law was a top two-year-old and he was on his game February first. That was nearly two months ago. A lot can change over 60 days in an early three-year-old season. How good is this son of Constitution? I don’t think we know for certain. However, when a short-priced 3-year-old favorite comes along off a two-month break with unanswered questions, you’re supposed to go against him.

8. My First Grammy (Sanchez/Berrios) - 50/1
The most interesting affect this guy might have on this race should be in the early running. He’s got some early foot and could contribute to the early pace. He’s still a maiden and not nearly this good. Pass on him.

9. Independence Hall (Trombetta/Rosario) - 9/2
Lots of folks head south for the winter because they enjoy Florida. This guy doesn’t. At least he didn’t love Tampa Bay Downs last out in the Grade 3 Sam F. Davis when he was solidly overhauled late by Solo Volante. Before that, this son of Constitution had strung together three outstanding performances--a Parx maiden score, a 12-length, Grade 3 Nashua romp and a solid Jerome triumph. He figures to be close to whatever early pace develops and a rider switch from the inactive Jose Ortiz to Joel Rosario shouldn’t matter because Rosario was aboard for the colt’s maiden win. Can the colt be trusted to fire a big one, or was the Sam Davis a more accurate reflection of his ability? Keep him around in exotic action and use him a bit on the win end.

10. Candy Tycoon (Pletcher/TBD) - 20/1
It took this guy five starts to break maiden and then he promptly finished a well-beaten second to #12 Ete Indien in the Grade 2 Fountain of Youth at nearly 24-1 odds. It’s a stretch to imagine he’ll fire a similarly strong bullet here. Connections are solid and he did close ground in the Fountain of Youth. This race is a sixteenth of a mile further. Still, he’s a bottom level exotic player at best.

11. Sassy But Smart (Condie/Bravo) - 50/1
Three of four starts have been on turf and the only dirt appearance didn’t go well. We’ll pass on this longshot.

12. Ete Indien (Biancone/Geroux) - 4/1
At two, this son of Summer Front seemed to be headed for a career on grass. He broke maiden first out with a late charge, going a mile and one-sixteenth on the Gulfstream turf. Next out, he was well beaten in the Grade 3 Bourbon at Keeneland. A one-turn dirt mile at Gulfstream seemed to suit him just fine as he scored solidly in that allowance/$75k optional claimer. What is most interesting about that race is that Ete Indien, who had shown no speed in two turf routes, suddenly went wire-to-wire on dirt to score at 14-1. In the Grade 3 Holy Bull, after showing speed again, he finished second, three lengths behind Tiz The Law. Last out, he romped home, wire-to-wire, in the Gr. 2 Fountain of Youth by eight and one-half lengths. Jockey Florent Geroux can be counted on to send this guy from the gate in an attempt to secure the early lead and to control the race. How much resistance he gets from other speed horses will tell the tale for Ete Indien. It should be noted that each of his five Beyer Speed Figures has improved. He’s talented, sharp, racing on a track he adores (4 starts, 3 wins) and is ridden by a hot rider who understands the value of hustling horses early. Can’t ignore this guy for the win and exotics.

13. (AE) Rogue Element (Romans/Vasquez) - 50/1
He’ll need one scratch to start in this race and then it will be from an outside post position. His form doesn’t suggest that he has a chance in here. He’s a maiden, second by a neck last out at 116-1, following two awful performances.

Bottom Line: If #7 Tiz The Law wins, we won’t be surprised. We will, however, lose our wagers. He’s the best based on form, but he brings question marks into this race. At a short price, we’ll seek other options. #12 Ete Indien is next best on form and will be setting the pace. However, he’s run two big ones in a row. #5 Gouverneur Morris deserves plenty of attention. He’ll need to take a step forward in here, but he’s got the connections and upside to possibly do that. #9 Independence Hall should be in a great spot just behind the early leaders. He’ll need to do better than he did in his last, but he’s got an effort in his past performances that would win this. Presence of Rosario is encouraging and he should be a solid price.

Be Well and, as always, Race On!