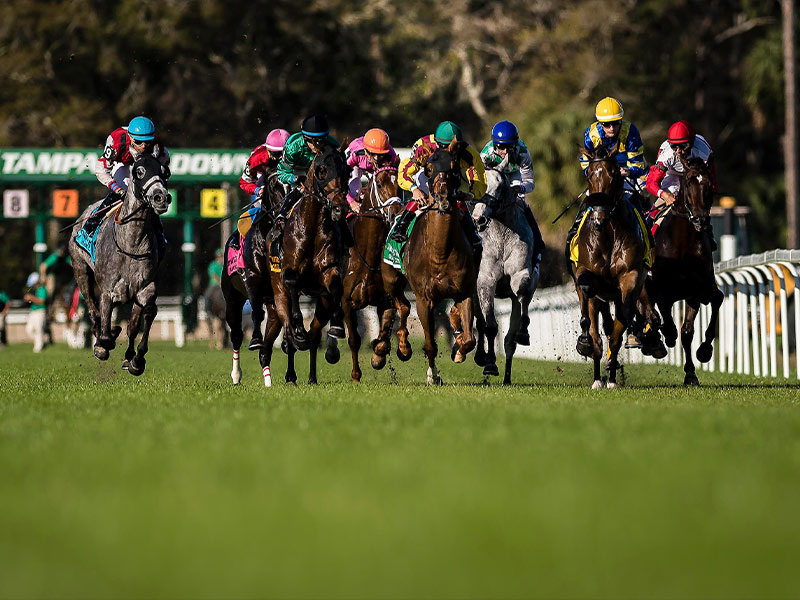 The Tampa Bay Downs race week kicks off Wednesday with an 8-race card that features an $81,240 carryover in the late pick five. The sequence begins in Race 4, and honestly does not have any free spaces with standout favorites. With a significant amount of ‘dead money’ in the pot, this is a good time for horseplayers to take a chance when the takeout percentages are more neutralized.

A major key to this race is if #13 STRONG GEM (4-1) draws into the field off the also-eligible list. He could be a potential single under red-hot riding Samy Camacho on the class drop. Because of that, we’ll devise two approaches to this pick five: singling #13 STRONG GEM, as well as a spread approach in this race in his absence. In turf claimers at Tampa in 2020, the Betmix stats show horses exiting top-3 finishes win 16% compared to just 8% for those off the board last out. That said, I’ll include #1 BEACHTREASUREGIRL (8-1) and #2 INCA PRINCESS (15-1) along with favorites #3 BIZNESS BEAUTY (3-1), #4 SHENU SHENUME (7-2) and #5 NOBLE INTENTIONS (9-2). I prefer that STRONG GEM draws into the field.

Favorites have won 42% of maiden claiming 7-furlong sprints at Tampa this year, so this one could play close to the vest. It’s a tough distance for a low-level horse and current fitness has been a must. All 19 winners this year have raced within 5 weeks. Seriously work to include an alternative to those attempting this spot off a layoff. #6 GONEASAGIRLCANGET (2-1) will try to buck that trend and looks solid on paper. Don’t get beat by her; but don’t single. #4 LANGUE LIEE (9-2) is the more alluring option as trainer Monica McGoey’s barn is a sharp 7: 3-2-1 at Tampa since the start of March. I’ll go two-deep.

Similar to Race 4, the fact that turf claimers exiting top-3 finishes have twice the strike rate as those trying to rebound off poor efforts can help whittle this tough field. Only 4 runners in this lineup have that quality, and 3 of them exit the same race March 21. I watched the replay several times and #6 ITSAGIMME’S GIRL (9-2) was the winner that day and galloped out best despite the diminishing late win margin. Samy Camacho is riding at 28% since the start of March. Expect this mare to hold off her rematch challengers again. It’s the newcomers that strike fear on the class drop. #4 BARREL OF DESTINY (7-2) will be running late, while #5 MONKEY MIND (3-1) should be up near the front challenging #6 ITSAGIMMEE’S GIRL. My preference would be to use all 3, but if we don’t get the AE to draw in Race 4 and the ticket starts to balloon in cost, then the bold single of #6 ITSAGIMME’S GIRL is the way to go.

This handicapping challenge rates difficult because several class droppers are just hitting the bottom level in hopes they can right their ship. #9 AMELIA’S WILD RIDE (5-2) used to be one of the best turf sprinters in the country. High-percentage trainer Jane Cibelli is able to lure top rider Antonio Gallardo during a fire sale, so it’s mixed signals. Don’t get beat by this one; but don’t trust him either. #7 BIG GILLETTE (4-1) drops in class and shortens the trip, having raced only a few times in 3 years. But he, too, lures the hottest jockey in the colony, Samy Camacho, so there’s reason to think he still plays at this level. The price seems short on #6 THE GREAT LOUDINI (5-1), but at least he looks like a $5,000 horse in reasonable form and gets a potentially quick pace to close into. I’d want closer to 10-1 to make a win bet, but definitely would include him in the pick five.

Betmix data tells me trainer Christophe Clement has won 6 of his last 9 starts at Tampa Bay Downs, including 4 with first-time starters, which is unbelievable. #9 GAELIC GOLD (3-1) has to be considered on connections and pedigree. #3 CLEAR AS DAY (7-2) has been wildly inconsistent, but her bullet workout April 2 indicates she may trend toward one of her good efforts vs. her bad. Trainer Mike Stidham is 4-12 in Tampa turf MSW races in 2020. #2 HEAVENLY PEACE (4-1) should improve in her second start for an Eddie Kenneally barn solid in this position and whose Tampa shippers have been on point in limited 2020 strikes. Larger budgets certainly could consider #7 WINDFALL PROFIT (6-1), who adds Lasix in her seasonal return for Shug McGaughey. Adding WINDFALL PROFIT would cost an additional $9 in our Plan A ticket and $15 in our Plan B.