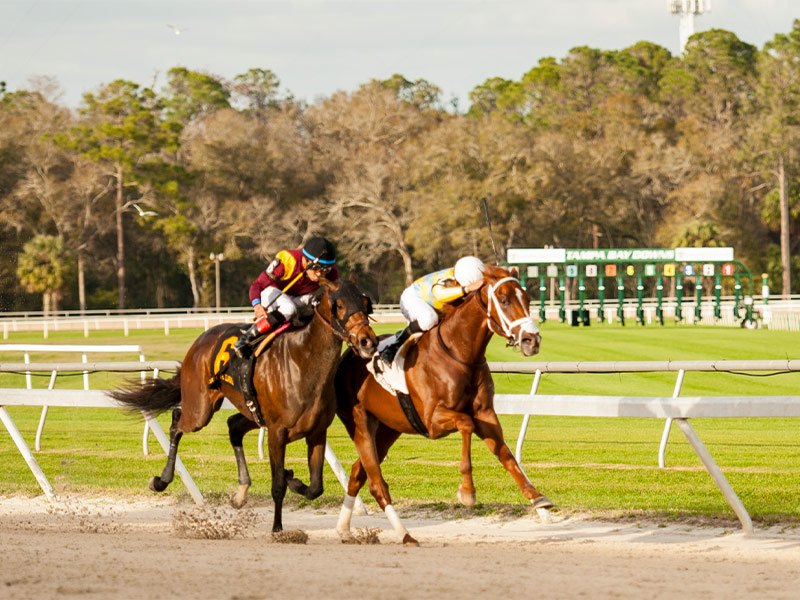 Forecast: Segismundo returns to a restricted (nw-3) $8,000 claiming main track router after crossing the wire second (beaten a neck) for $16,000 in a turf affair last month that earned him a career top speed figure. A repeat of that race, or his easy win over this dirt strip two races back probably is good enough to return him to the winner’s circle. What a Hoot removes blinkers after taking the overland route and failing to make any real impact vs. tougher on turf three weeks ago. This is his lowest level ever and while he’s primarily been a turf/all-weather specialist throughout most of his career the son of Data Link did run okay over conventional dirt at Laurel early in his career. On pure numbers he’s a strong fit. We’ll try to get by using just these two in rolling exotic play with preference on top to Segismundo.

Forecast: Maiden $16,000 claimers meet over a middle distance on grass in today’s second race, an open event that requires a spread in rolling exotic play. It’s a pretty yucky affair, so best advice is to include as many as you can afford to. Chica Difisel earned a competitive speed figure over this turf course in early February and has hit the board in her last three outings, all on dirt, though she failed to deliver the goods at 4/5 last time out. Low percentage connections notwithstanding and at 8-1 on the morning line, she may be able to make amends today at a much better price. All American Jewel hails from a competent barn and was a good closing third in a similar event last week that charts well in this soft spot. Despite the quick seven day turnaround, the daughter of Justin Phillip must be given a chance to grind down the leaders late. V K Legacy, poorly drawn but third in her last two starts with numbers that look solid in this context, is an 11-race maiden but appears to be improving, at least slightly. She has a good stalking style that should put her within range, and if she can manage to save some ground somewhere along the way the daughter of Verrazano just might be able to break through.

Forecast: Chit Chat Girl equaled her career top speed figure when second for $12,500 at Gulfstream Park following a nine month layoff two weeks ago and that race should have her primed for a major effort after vanning back to Tampa Bay Downs, where she broke her maiden last fall. Her comfortable outside draw will allow her to press or stalk the pace, do we’ll give the daughter of Chitu a very slight edge on top. Local runaway maiden $16,000 winner Tipsy Again earned a good figure in her easy score last month and is realistically spotted in this 3-year-old only race for the same price. She should have enough early speed to be on the lead (or close to it) and with just two starts under her belt the daughter of Awesome of Course may have a bit more upside that most of the others. Diamonds News is worth including as well on a ticket or two. In the frame in her last six starts but a no-threat distant third as the favorite last time out, she drops to her lowest level ever so there’s a chance she regains some confidence and snaps back.

Forecast: This restricted (nw-2) $16,000 claiming grass router for fillies and mares is completely wide open with nothing to trust. Let’s go for a price. Premium Motion seems certain to be the best price of the three listed above and could easily run back to her best form. She has the blinkers off angle that we like and is making her third start off a layoff for a good barn while displaying a couple of back speed figures that are close to par for this level. The daughter of Uncle Mo has the kind of tactical speed that should ensure a clean, stalking trip, so at 12-1 on the morning line she’s worth a flyer. Shenu Shenume is dropping to her lowest level ever and earned numbers over this course in her second and third race back that put her squarely in the mix. She’s from a competent barn and will be doing her best work from the quarter pole home. Bizness Beauty exits a stronger race in which she never got involved, but against this group she could be dangerous from off the pace with a bit of help up front. First or second in three of four career starts over the local lawn, the daughter of Fed Biz is just 1-for23 (with 11 seconds and thirds) so if nothing else use her underneath if you’re playing exactas and tri’s.

Forecast: Goneasagirlcanget returns to an extended sprint after just failing to see out the trip when second in a two-turn affair vs. similar maiden $10,000 foes last time out. She’s run well at this seven furlong trip in the past, however, failing as the betting choice in her last two starts does not inspire confidence. But if not her, then who? Let’s make her a no-value rolling exotic single but otherwise pass the race.

Forecast: Monkey Mind, freshened since mid-January, shows up for $16,000 today, her cheapest level ever, and at 3-1 on the morning line seems well-spotted to regain her winning form. Most effective on the front end but able to stalk and pounce if the pace flow demands, the daughter of Archarcharch has a prior win over the Tampa Bay Downs turf course on her resume and several speed figures among her most recent races that are better than par for this level. Regular pilot R. Mena takes the call and should have her within striking range throughout from a comfortable 5-hole post. She’s Dynomite lands the good rail, so we’re anticipating an ideal, ground-saving, stalking trip for the veteran mare. A seven-time winner from a solid outfit, she’s likely to fire her best shot, which should at least be good enough to get a piece of it, if not more. Barrel of Destiny chased tougher in a couple of outings since vanning down from New York but the numbers she earned make her a fit and at this level. The daughter of Bluegrass Cat has a good history over the local lawn and attracts the leading rider, so we’ll include her as well.

Forecast: Double Deep drops again in class trying to find conditions that suit him. On speed figures he’s certainly a fit at the $5,000 level, and after a series of route races both on dirt and turf trainer B. Feliciano now has decided to make him as a late-running dirt sprinter. Amelia’s Wild Ride has been sprinting without much success on grass against much tougher and he, too, should appreciate this much soft task. The 9-year-old gelding vans up from Gulfstream Park for the money run, and while it’s been almost 15 months since his last win the son J. Cibelli-trained old-timer, like Double Deep, could easily snap to life in this league. We’ll sink or swim using just these two late-running types in our rolling exotics while slightly preferring Double Deep on top.

Forecast: The finale is a maiden special weight turf miler for fillies and mares. Windfall Profit, away since last fall, returns for Shug in a moderate spot and has trained like she’s fit and ready at Payson Park to be ready for a winning effort off the bench. She’s a first-time Lasix user for a trainer who has very good stats with layoff runners and could easily be a better 3-year-old than she was at 2, when her form was probably a bit better than it shows on paper. In a race in which local element doesn’t impress, let’s go with this daughter of Malibu Moon who at 6-1 on the morning line offers good gambling value in both the win pool and in rolling exotic play.