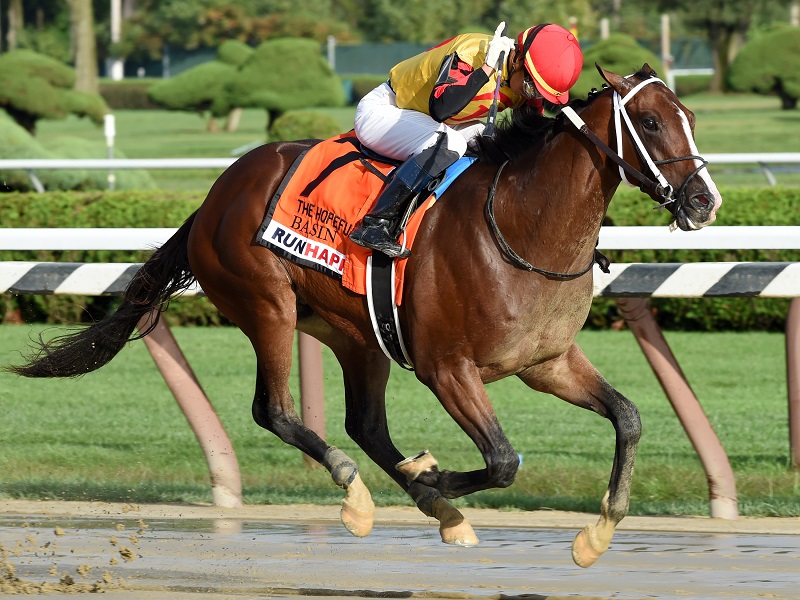 This season’s traditional Triple Crown series is, like most of us, under quarantine. The Kentucky Derby has been re-scheduled for the first Saturday in September. But, at this writing, there’s no word on Preakness or Belmont fates. Along the road to the Triple Crown familiar signposts have been removed. Last Saturday, for example, Santa Anita Derby, Wood and Blue Grass original dates were lost to COVID 19. They join the Sunland and UAE Derbies, and Lexington Stakes as important 3-year-old races either cancelled or postponed.

Oaklawn Park, in Hot Springs, Arkansas, is just one of three tracks still operating that hosts major 3-year-old events. Tampa Bay Downs held their Derby on March 7, and Gulfstream enjoyed a banner Florida Derby extravaganza three weeks later. Now, it’s Razorback time. The Arkansas Derby, a key Kentucky Derby feeder event with a rich 170 points toward a spot in the Kentucky Derby starting gate was originally scheduled for Saturday. That race has been re-scheduled for May 2--a day that became available when Churchill repositioned the Kentucky Derby. In its place Saturday is the second running of The Oaklawn Stakes, a $200,000 mile and one-eighth event for 3-year-olds that has attracted a mixed bag of Derby hopefuls, matching once promising runners that have stumbled against improving types seeking a forward step. The first three finishers in this field will earn spots in the Arkansas Derby where purse earnings will otherwise determine starters.

Below is one man’s horse-by-horse analysis of The Oaklawn Stakes field with selections and a suggested wagering strategy.

Here’s a colt that showed great promise around one turn in three 2-year-old races, winning Saratoga’s Hopeful by more than six lengths in the slop. He made his initial 2020 start a few weeks ago in the sloppy Gr. 2 Rebel Stakes. Rated early, he never really got a clear path to run until late. To his credit he didn’t give up. Expect different tactics to be employed Saturday with this son of Liam’s Map. Jockey Florent Geroux takes over and probably will hustle this guy to the lead early. There’s not much quality speed in here and Geroux has stolen a few soph races on the lead already this season. This colt’s the one to catch and, with a race under his belt, he should be ready to fire a good one.

Off a solid muddy track maiden score, this son of Take Charge Indy moved aggressively into the Gr. 2 Rebel Stakes. Lasix was added that afternoon and he ran and OK in fifth, beaten eight lengths. However, he’ll need to improve even more to threaten in here. Some might argue that since he finished less than one-length behind Basin in that race he deserves a look in here. Difference is that Basin already has run fast enough to win this, the ‘Coach hasn’t.

This son of Giant’s Causeway has improved with each start and comes here from Fair Grounds off a maiden win and a fifth placing in the Gr. 2 Risen Star. He needs to go faster to win this race.

Unbeaten in his first three starts, including the Gr. 2 Los Alamitos Futurity and the Gr. 3 Robert B. Lewis stakes at Santa Anita, this son of Pioneerof the Nile fired a dud in the Gr. 2 San Felipe when fourth, beaten more than 11 lengths behind fellow Bob Baffert trainee Authentic. Will he rebound and repeat earlier efforts that are good enough to win this? Baffert’s been juggling his top sophs around a shifting 3-year-old calendar and this seems like a spot the Hall of Fame trainer has chosen in an attempt to get this guy back on track while saving the trainer’s best 3-year-olds for runs at bigger prizes. ‘Words a grinder who keeps coming in the stretch. Baffert was quoted saying jockey Flavien Prat might have had the colt too close to the early San Felipe pace. Joe Talamo takes over for Prat and may look to place his partner around mid-pack. There’s not much speed in here, so Talamo shouldn’t get too far back early and leave this grinder with too much to do. This colt’s a real question mark because he’s good enough to win with his best, but not off his last two.

This well-traveled invader and son of Paynter likes to win races. He’s finished first in four out of six starts. This seems a step up in class. He’s got speed, so expect to see him close early and he drew clear last out in the Mine That Bird Derby at Sunland Park in February, so he’s in form. His speed figures need a big boost to contend here, but it’s always dangerous to dismiss win types.

This son of Into Mischief finished second, beaten over six lengths by stablemate Basin in the Gr. 1 Hopeful Stakes at Saratoga. He hasn’t reproduced that form since, although he did win the Springboard Mile at Remington in December. Most recently he was fourth, beaten nearly nine lengths, in the Gr. 3 Southwest Stakes. He has plenty of graded stakes experience, including three Grade 1 tries at two. He’s one of three Steve Asmussen runners in here and he gets the barn’s go-to rider in Ricardo Santana Jr. Shoplifted doesn’t have much speed, so Santana probably will attempt to save ground for a late run.

Winner of the Arlington Washington Futurity in September over Arlington’s synthetic surface, this son of Oxbow was outrun in the Gr. 3 Gotham at Aqueduct last out. He needs to do a bit better.

An impressive romp in an Oaklawn allowance last out suggests that this son of Twirling Candy is doing well. He didn’t fare nearly as well in a pair of Gr. 3 tries before that. Jockey Joel Rosario returns in the saddle for SoCal-based trainer Richard Baltas—a winning combination. It’s unlikely he’ll make an easy lead in here like he did in his recent winning effort.

This lightly-races son of Into Mischief has lost ground in the stretch in his last two races and that doesn’t favor his chances in here. He did fire a big shot when second (awarded first money) in a Fair Grounds allowance race. Still, he’s got to improve to threaten in here.

This son of Violence hails from the red-hot Brad Cox stable and was a well-beaten third in the Rushaway Stakes at Turfway Park last out. That effort isn’t good enough to threaten in here and it was his best ever.

After just missing at nearly 39-1 first out, this son of Khozen broke maiden in his next start by nearly five lengths at 5/2 odds. He then finished a well-beaten third in a ‘sloppy’ allowance race. Although he hasn’t taken a backward step yet, he’ll need to improve again to win this.

This son of Quality Road adds blinkers for this race for trainer Todd Pletcher. The colt has passed at least one foe in the stretch of all four lifetime races. That shows he’s got some ‘try’ to him. Runners like this must be respected in exotics, especially at decent prices. If blinkers help a bit, this guy will be running at the end. It doesn’t look like there’s enough speed in here to set the stage for him to win, but he tries and might hit the exotics.

Street Boss is the sire of this hard-hitting colt. He’s won three of seven starts, including one of two at Oaklawn Park. Importantly, he’s three for three on ‘wet’ tracks and zero for four over ‘fast’ surfaces. He’s got enough speed to be close early, as he attempts to flee this far outside post, and he won both the Sugar Bowl at Fair Grounds in December and the Smarty Jones at Oaklawn in January. Problem is that he tossed a clunker in Oaklawn’s Southwest Stakes last out—he finished last by more than 23 lengths. Supporters will suggest that he had an uncomfortable trip that afternoon and they wouldn’t be incorrect. Still, he backed up so readily that it’s difficult to imagine him completely turning the tables in here. Perhaps he can be used in exotics and if it rains, all bets are off…move him up a lot.

Bottom Line: Expect #1 Basin to be sent for the lead from the rail by jockey Florent Geroux. How intent others are in going with him early will have a huge effect on the final results.

#5 Sir Rick figures to ‘go.’ Jockey Cohen ought to be content forcing the pace outside of Basin. #13 Gold Street will be asked for speed by jockey Baze from the far outside. If Basin breaks well, they won’t demand the lead and sit second or third. #4 Thousand Words should find a cozy spot just behind the front runners. He’ll be joined on the outside by #10 Something Natural. The rest will sort themselves out in the back of the field.

If the pace unfolds as expected above, when the real running starts, #1 Basin should have a solid response. First challenges will come from #13 Gold Street and #4 Thousand Words. #12 Farmington Road figures as the most determined closer.

Stay Home, Be Safe, Race On!