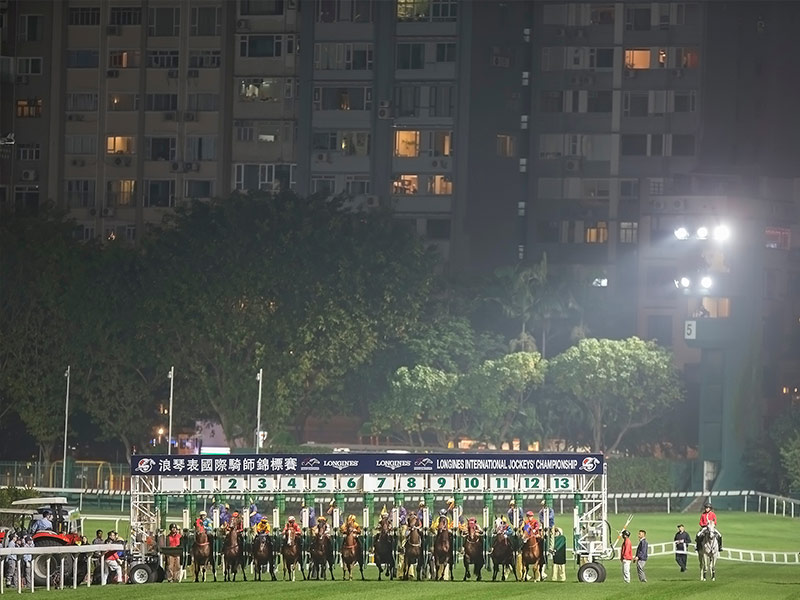 #11 Charitydream is winless. He might be down to a competitive mark now and his latest effort on the dirt was much improved, so, if he can translate that form to the city circuit then he’s a leading player, especially from gate one. #1 Galaxy Racer has narrowly missed on a number of occasions this term. He’s close to a breakthrough win and it wouldn’t surprise to see it come here. #10 Virtus Star is in a similar boat. He closed strongly for second at his first start for Frankie Lor last time out and although he’s drawn wide, he profiles to be right in the mix here. #8 Gloriam is next best.

#5 All Wongchoy has led and won over his course and distance previously. New boy Antoine Hamelin takes the reins from gate five fresh off a day one double and if he can find the right spot early on this horse, he could take a power of running down. #8 Yee Cheong Pegasus rarely runs a bad race. He’s gone to a new level this season for Tony Millard and his good fortune can continue here. #10 Compassion Star has had three runs and is still searching for his first win. He’s gone close on several occasions and the booking of Zac Purton for the first time bears close watching. #3 Lady First is consistent and is expected to be thereabouts.

#3 Tung Wah Glory was nothing short of impressive when breaking through last start. He can figure again and he gets a race to suit by remaining in Class 4 off that run, especially with Zac Purton sticking aboard. #2 Triumphant Horse has drawn to get the gun run for Joao Moreira. He hasn’t been too far away this term and with further improvement he can go on with it. #1 Oriental Elite is another who has been close all season. He’s drawn a touch awkward but this is suitable. #12 Courageous Dragon gets in light with only 117lb on his back. The in-form Karis Teetan takes the reins and he gets the conditions to suit here.

#1 Happy Good Guys has gone to a new level this term as a two-time Class 4 winner. He sits on the cusp of Class 3 now and with even luck he should be able to climb his way further up the ratings. He’s drawn well for Vincent Ho and this appears to be his race to lose, even with top-weight on his back. #2 Shanghai Master has steadily improved all campaign. He’s a two-time course and distance winner who with further improvement, is expected to be in the finish. #7 Victory Mastery is yet to piece it all together in Hong Kong but is racing well enough. He’s a danger with the right run from Joao Moreira who on Sunday, ticked over 100 wins for the season. #11 Sky Treasure gets in light. He’ll need a few things to go his way but he might be ready for a turnaround in form now.

#6 California Rad is unlucky not to have already won a race in Hong Kong, having narrowly missed on a number of occasions across his seven-start career. This is suitable, especially from gate three. #1 Magic Supreme gets a welcome drop to Class 4. Sharp improvement can be expected here in the weaker grade, especially with Zac Purton now hopping aboard. #3 Super Lucky got his win last start after tallying three consecutive runner-up efforts. He’s open to further improvement now, especially with that win under his belt. #11 Super Winner hasn’t lived up to his name yet but does come into this off an impressive trial score. He can figure in what is a rather tricky contest.

#5 Charizard’s recent form hasn’t exactly set the world alight but he has proven previously that he is up to this level. He’s drawn to get all the favours from gate one and if he can produce his best, then he’s worth taking a chance on. #2 Californiadeepshot made all impressively to win at his Hong Kong debut before missed at his last two. Still, he’s a talent and the services of Joao Moreira warrant respect. #3 Shouson has enjoyed a rapid rise to success with three wins this term. He remains in Class 3 and still appears to have a number of ratings points in hand. #7 Beauty Spark loves a third placing with five from his last five starts. Still, he is racing well and can’t be underestimated, especially if he again, puts his best foot forward.

#5 Sunshine Warrior is lightly raced but steadily improving with two wins from his last three starts. He’s drawn to get the right run here from gate three and with even luck he can continue his ascent up the ratings ladder. The in-form Chad Schofield retains the ride which suits. #6 Reel Bizzy is winless across six starts this term. Still, he has ability and he’s shown the necessary improvement with each start to suggest that another success was only around the corner. #3 Jolly Honour got his second win this season last start. He remains in Class 3 off that performance which suits and gate one should see him with a soft run throughout. #7 Heavenly Thought has hit his straps of late with four top two finishes from his last four runs including a win. He’s next best if he can continue to hold his consistency.

Difficult Class 3 contest but if #12 Confucius Day can cross and find the front, he could prove awfully hard to run down. He gets a handy weight relief here but is facing Class 3 and though this will be difficult, he’s worth taking a chance on to pinch this from the front. #2 Meridian Genius is a two-time winner from his last five outings. He’s the class runner of the field and if he doesn’t find himself too far away then he’s going to get every chance to reel in the leaders. #7 Island Shine turned his form around to grab second last start. He has the wide gate to contend with but he’s shown that a win isn’t too far away and the booking of Zac Purton now, warrants respect. #1 Winning Method is a handy galloper who won well last start. He gets up in the ratings now which is a concern and top-weight duties won’t make life easy, though, in his favour is gate five.

This is a more than suitable race for #4 Dances With Dragon who won at the city circuit two starts ago before his game fourth on the dirt last start. There are no distance queries here and with Zac Purton hopping back up he shapes as the one to beat. #2 Helene Charisma does his best racing at Happy Valley and is a course and distance winner the track already this term. He’ll put his best foot forward against this bunch and rates as the main danger here. #9 Enrichment is looking to snap a run of two runner-up efforts. He’s racing well and if he can overcome the awkward then he’s going to be in the mix. In his favour is the booking of Joao Moreira and allocation of only 121 pounds on his back. #8 High Rev rattled home for a close-up third last start. If he can replicate that performance here then he’s going to test these.