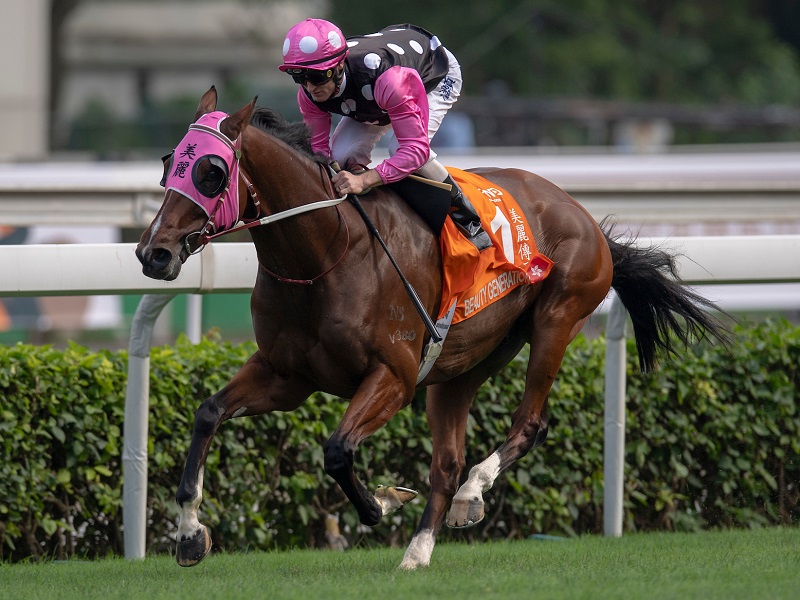 #13 City Legend is as consistent as they come albeit without winning. He’s tallied a costly nine runner-up efforts from 26 starts but again though, if he manages to perform at his usual level, he will find himself in the right spot to win, as long as he can put it all together. #3 Charge On won well last start. He appears to have a number of rating points still in hand and this race is well within his grasp. #1 Chairman Lo is another who across his career has become a costly conveyance, five times finishing second as a single figures chance. Still, his consistency warrants respect. #12 Winston’s Lad is next best for the in-form Antoine Hamelin.

#2 War Room steps out for the first time under the care of David Hall after switching from the Jimmy Ting yard. He’s displayed immense talent this galloper and although he’s still winless, he has shown that it’s only a matter of time. He’s trialled well and the booking of Zac Purton this time bears close watching. #6 War Of Courage has turned into a nice little horse having won two out of his last three starts. He has an awkward draw to contend with here which is a concern, especially as it is his first time racing around a bend, but he’s still on the up. #9 Bright Vision turned his form around last start to grab third. He’s drawn to get the right run and is capable of challenging here. #12 Eligere is next best.

#4 Casa De Forca is a 17-start maiden which is a concern, but, he has put some nice runs together and he’s drawn to get all of the favours here, especially with a few of the other likely fancies drawing wide. He can get into a nice position throughout and the in-form Chad Schofield is more than capable of getting him over the line. #1 Good Luck Friend was impressive when winning last start. He sits on the cusp of Class 3 and it would not surprise to see him shift up the ratings ladder here. #6 Rhapsody has a little bit of hype about him after trialling impressively on a number of occasions. He bears close watching but gate 11 might make things difficult. #11 Stock Legend is next best.

#8 Gift Of Lifeline is racing well. He’s a winner already this term and although he lacks early speed, he does get an added furlong in distance here and with a clean run he can finish over the top of this bunch. #10 Joyful Heart has placed in his last two. He’s a two-time course and distance winner who gets Zac Purton up. #11 Ever Laugh won well over this course and distance two starts ago before struggling at his latest. He gets back ti his preferred trip here and this contest looks suitable. #2 Lakeshore Eagle is a talent. He’s next best if he performs at his peak.

#11 Aethero oozes talent but he can be quite quirky at times. If he brings his A-game the this race is his to lose and from the gate, with Zac Purton up, he should be able to put his last-start woes behind, especially off the back of an impressive trial score. #1 Hot King Prawn is as consistent as they come. He’s placed in three G1’s this term and has proven himself to be up to this level. This is his opportunity to bag a top level success and in the right spot he can win. #Thanks Forever gets the blinkers applied to sharpen him up. He hasn’t won for a while but he rarely runs a bad race and isn’t without a chance, especially as a G1 placegetter already. #9 Big Time Baby is the surprise package of the race having returned from an inconvenienced trip to Dubai where he didn’t run. Surprisingly his grass form is still strong and he might be way over the odds to finish top three here.

#1 Wellington has enjoyed a rapid rise to success in Hong Kong by winning his first three starts. He’s shooting for a fourth unbeaten win here and he looks well placed to do so from gate three with Zac Purton engaged once more. #3 Beauty Smile grabbed second on debut. Awkward draw makes things difficult here but he should be around the mark again. #10 Fantastic Show is looking for his fourth win in a row. He’s gone to a new level here and as a Class 3 winner already, he rates as a leading player. #5 Cool Team hasn’t exactly done much since his first-up win. Still, he clearly has the ability and has shown no signs of training off.

#1 Beauty Generation is looking for his third consecutive Champions Mile win and he appears more than capable of getting it. He’s won his last two starts and his latest, quite comfortably in the G2 Chairman’s Trophy over this course and distance. If the track is wet it will play into his hands but either way, he appears to have recaptured his blistering best and this contest appears to be his to lose. #6 More Than This has shown a brilliant turn of foot over this course and distance, especially as a three-time winner. He commands plenty of respect here back down to his preferred distance after placing in all three legs of the Four-Year-Old Classic Series. He might be worth a value play. #2 Waikuku appeared to struggle on the wet deck last start. Still, he can bounce back because that was well below his best, even if it was a slightly wet surface. #3 Ka Ying Star is honest. He’ll be boxing on for prize money.

#1 Exultant is Hong Kong’s champion stayer and he can cap a solid season with a G1 score in the QEII Cup. He’s a proven G1 winner over this course and distance and although he couldn’t quite chase home Time Warp last start, he is favoured to return to winning ways here, especially with those trials under his belt. #1 Time Warp can run them along out in the lead. He’s a straightforward ride and if he makes his own luck once again, he’s going to prove difficult to reel in. #6 Playa Del Puente nearly pulled off on the of racings biggest upsets last start in the BMW Hong Kong Derby (2000m). He warrants respect and it’ll be interesting to see how that Debry form stacks up here. #7 Glorious Dragon is next best. He’s a stayer on the rise and though this will be tough, he is capable of finishing thereabouts.

#4 Computer Patch is a supreme talent on the rise after winning well two starts ago. He gets a suitable draw in gate one and he comes out of a very strong Class 2 contest last start. If that form holds up again here then he is the one to beat. #7 Gold Chest rattled home from the tail of the field two starts ago to win by a nose. If he’s continued his progression from that run then he’ll be able to test these. #11 Glorious Spectrum was awful first-up. He’s since been the trials and looked sound, so if he manages to hold that condition and recapture an ounce of his best, he’s in with a shout. #6 Shining Ace stretched clear last start for a comfortable win. This is much tougher but still, he can figure again, especially from the good draw.

Competitive mile to close off FWD Champions Day with. Siding with #4 Hezthewonforus here, he’s tallied a number of competitive runs this term, including a game runner-up effort two starts ago. He’s worth taking a chance on in what is a wide open finale. #1 Preciousship is a four-time winner already this campaign. He’s enjoyed a rapid rise to success and although he was beaten last start, it was by only half a length and the small break between runs will have freshened him up nicely. #13 Monica gets in light with only 113lb to carry. This is suitable. #3 Butterfield steps back to the mile after two competitive runs over 2000m. He’s fit and should be thereabouts against this bunch.