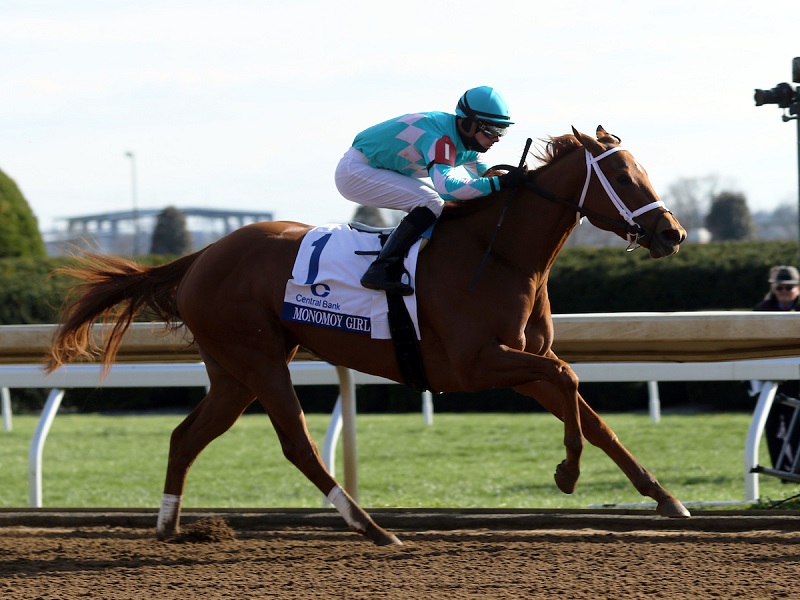 Each Monday, I’ll select my Most Valuable Pony from the previous week’s racing action around the country. Who won the week? It could be a breakout performer, a known stakes commodity or the horse lifting the most loot. Chime in on Twitter @Xpressbet with your thoughts on who should be each week’s MVP.May 11-17, 2020MVP: Monomoy GirlOwner: Michael Dubb, Monomoy Stables, The Elkstone Group, Bethlehem StablesTrainer: Brad CoxJockey: Florent GerouxPerformance: The Eclipse Award-winning mare showed little to no rust in her May 16 return to action, brushing off a 560-day layoff almost as easily as her allowance competition at Churchill Downs. The 5-year-old winner of the 2018 Breeders’ Cup Distaff posted a convincing 1-turn mile victory by 2-3/4 lengths in her comeback bid over a wet track. She stalked the pace, pounced in upper stretch and was never in doubt over the final furlong-plus. The score upped her record to 12: 10-2-0 lifetime and pushed her over the $3 million earnings plateau.On Tap: Trainer Brad Cox indicated a 2-turn race would be next for Monomoy Girl, but did not offer specifics with much still to be determined on the national stakes landscape. You would expect a Kentucky-New York campaign toward the Breeders’ Cup Distaff in the autumn. Given the 2-turn criteria, that would eliminate Belmont Park’s soon-to-be-released stakes schedule. The June 27 Fleur de Lis at Churchill Downs makes sense on timing, location and natural re-rise in class to the Grade 2 level. A trip to Saratoga for a potential Personal Ensign date and/or the Spinster at Keeneland are natural longer-range fits.Honorable Mentions: Gulfstream Park’s leading 3-year-old filly Tonalist’s Shape had a bounce-back effort in the May 15 Hollywood Wildcat Stakes. The Grade 2/Grade 3 winner dropped into listed stakes company to right the ship after a seventh-place run in the Gulfstream Park Oaks, which remains her only defeat in 7 starts. The ladies continued to absorb the spotlight last week when Grade 1 winner Bellafina returned to her winning ways in the Grade 3 Desert Stormer at Santa Anita on May 17. She provided 1 of 6 wins on the card for jockey Flavien Prat, and in doing so snapped her own personal 6-race losing streak. And finally, the boys got into the headlines when Just Whistle captured the May 17 Sunday Silence Stakes at Gulfstream. The Michael Matz trainee notched his first stakes tally in defeating heavily favored Spinoff while 1-upping his second-place performance in the Grade 3 Hal’s Hope in March.