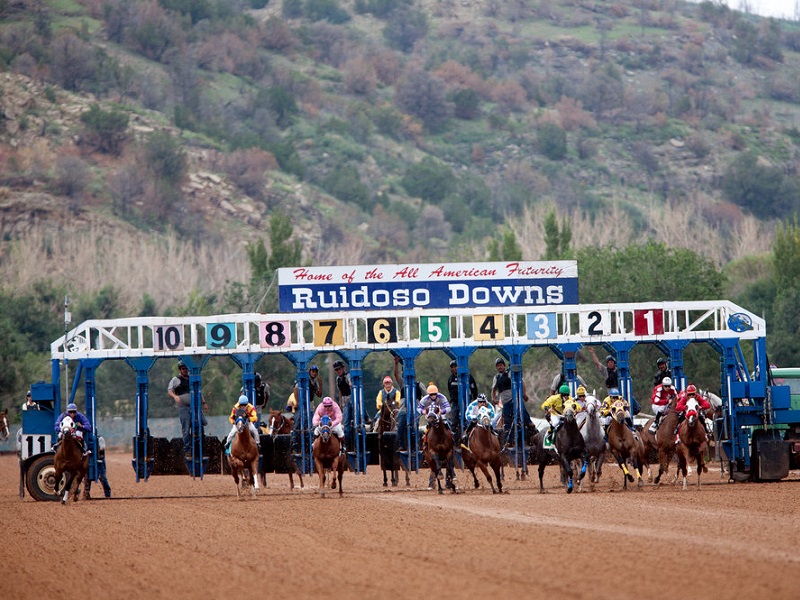 WILMAS’S IRISH ROVER (#1) is a significant class dropper here; competed for $30k last time the gelding was on the local track; let’s go.
HOWDY (#8) is still plenty feisty for an eight-year-old; 45 lifetime starts and $280k in earnings.
REBACK HOME (#7) is a grizzled veteran race  horse with 25 local starts and 10 wins.

STREAKIN RECKLESS (#2) was dq’d out of maiden win here last summer; still lookin’ for that elusive first win—maybe today.
JR LITTLE REGARD (#7) has a recent nice work to consider; 11.91 seconds at 220.
VOICE OF ACTION (#5) is at lowest claiming level of the gelding’s career; capable of an upset.

ANOTHER BROTHER (#7) is a local favorite with bettors; 8 of 10 lifetime in the money at Ruidoso Downs.
AMOR N PASION (#8) just won a claiming race by 16 lengths? Muddy track and the forecast calls for rain Monday afternoon.
WHEREDOESTHECASHGO (#2) is the early speedster; let’s see if she gets caught.

KNOCKOUT CHICK (#6) was always the bridesmaid last year with three second-place finishes; let’s bet across just in case.
JESS A DASHER (#1) was thrown into he wolves last fall over at Zia Park; this bunch looks easier so expect improvement.
DADDYS FASTER (#8) seems to hang around other runners without winning; expect the same.

DF FABULOUS FIRE (#6) was an impressive schooling race winner; gaining experience here for later in the summer.
JLC STEAL YOUR CASH (#7) races alongside the top pick; gotta help his chances.
JALAPENO BABY (#1) is 12-1; worth strong consideration is wide-open event.

PR VOLCOM (#7) won in January; that’s more than the others can report.
ABOUTI TOO SHOES (#9) lights the board half the time; betting across.
Y YOU SO MEAN (#8) is the class dropper; should race much improved.

A ZENON NITE (#8) goes from mid-level allowance to claiming ranks; let’s get our picture taken here.
DRIVE THRU GARY (#4) has been racing much improved; 6-1 is a fair price.
ICED (#2) is a longshot with a chance; big class dropper at 10-1.

VEERY’S VERSION (#9) keeps cashing paychecks time after time and trainer Barton finds a nice spot to drop the mare into without fear of claiming.
HOLLYWOOD N CROWN (#10) should race alongside top pick to make one another run faster.
GO BIGG DADDY (#2) has one start and one win; can’t do much better than that.

EVACUEE (#4) is our best bet of the day for Fincher barn; here’s a youngster that competed for $100k at Sunland and runs for minor allowance purse.
INDEFINATELY (#9) impressed many in the spring with a five length score; tougher field today.
SEVEN SILVER COINS (#6) will likely outbreak the top two selections and set the pace; here they come.

CONSIGLIERE (#4) had a three-race win streak until last time at Remington; clearly a top-notch race horse.
BOTTICELLI (#7) is an eight-year-old that has won four in a row; obviously appears to be in top form.
FLASH FOR CORONA (#6) is 15-1 and on a two-race win streak? Worth a buck or two.

MAIL MAN M G (#7) is a class dropper with a talented rider; like his chances.
FORTY FIVES STORM (#10) already won but suffered a dq; knows how to win.
JEWEL OF NAVARONE (#4) will keep running till the wire; gotta use in exotics.