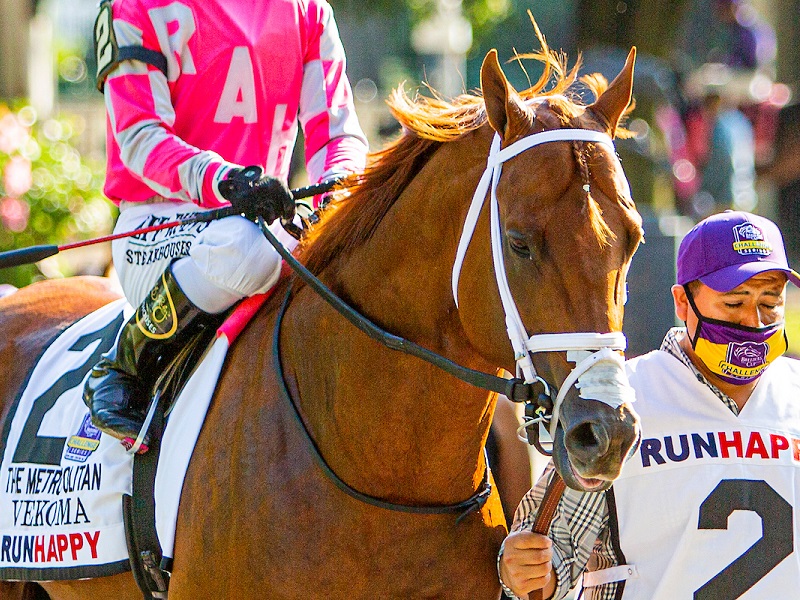 Each Monday, I’ll select my Most Valuable Pony from the previous week’s racing action around the country. Who won the week? It could be a breakout performer, a known stakes commodity or the horse lifting the most loot. Chime in on Twitter @Xpressbet with your thoughts on who should be each week’s MVP.June 29-July 5, 2020MVP: VekomaOwner: Hill Stable and Gatsas StablesTrainer: George WeaverJockey: Javier CastellanoPerformance: Racing’s newest millionaire scored his third win of 2020 without a loss when wiring the July 4 Grade 1 Metropolitan Handicap at Belmont. The son of Candy Ride added to his Grade 1 Carter score earlier in the meet when comfortably besting a trio of other Grade 1 winners in a star-studded Met Mile field. Jockey Javier Castellano sensed a modest pace on paper, shot to the front from the inside and never looked back. He ran a mile in 1:32.88 with no quarters slower than :23.70, coming home in :23.31. It was the third-fastest Met in the last 20 years, only a tick behind Frosted and Mitole in recent outings.On Tap: Vekoma would be a major threat in the Breeders’ Cup Sprint or Dirt Mile division, and isn’t out of the question in the Classic ranks, given his Grade 2 Blue Grass victory at a mile and one-eighth last year. But expect him to stay shorter than the Classic trip, while not ruling out the 9-furlong Whitney at Saratoga. The Forego at the Spa over 7 furlongs remains a logical spot as well. The Dirt Mile makes the most sense for his abilities, even if lacking the prestige and purse of the other divisions.Honorable Mentions: Tacitus found the right group and ran the race of his career, dominating the July 4 Grade 2 Suburban. He snapped a 7-race losing streak with an 8-1/4 length victory in 1:59.51 for a mile and one-quarter, the fastest renewal of this race since Peace Rules in 2004. Also at Belmont on July 4, Frank’s Rockette was just .02 off the 7-furlong track record when whistling home in the Grade 3 Victory Ride Stakes for her first graded victory. Meanwhile, while he’s not on the level of last year’s Breeders’ Cup Turf dominator Bricks and Mortar, Chad Brown has another top divisional domestic player in Instilled Regard, winner of the July 4 Grade 1 Manhattan. Third in January’s Grade 1 Pegasus World Cup Turf, Instilled Regard continued his improvement in the Fort Marcy and was sharp on the scene late in the Manhattan. Finally, Bob Baffert fired another Kentucky Derby warning shot July 4 when second-timer Uncle Chuck easily dispatched 3 rivals as the heavy favorite in the Grade 3 Los Alamitos Derby.