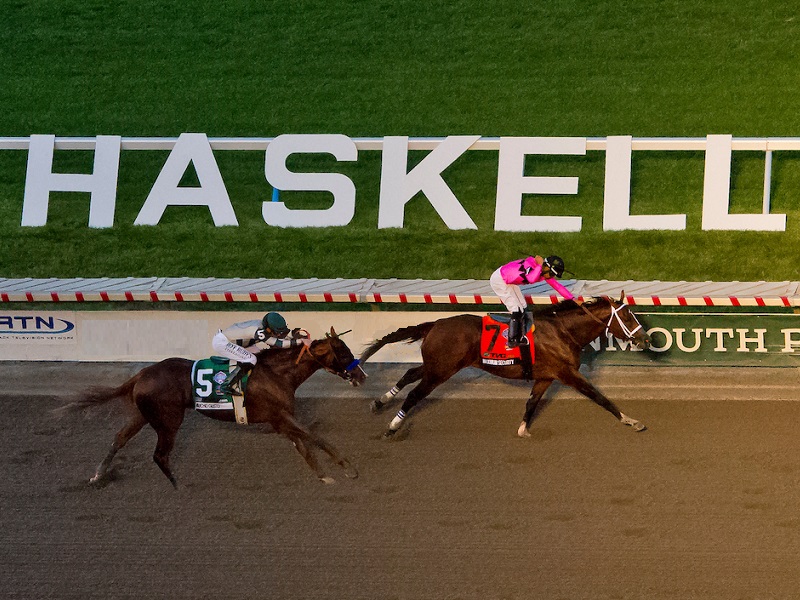 Authentic has won 3 of 4 starts, battling on the front end in each of those outings. The Monmouth track traditionally plays fast and toward speed on Haskell Day, so expect jockey Mike Smith to have him on the engine with this inside draw. Smith won the Haskell in the 1990s with horses like Holy Bull and Coronado’s Quest.

The other predominant early speed in the race likely comes from widest-drawn NY Traffic, who very well could pressure the outside flank of Authentic throughout early and middle stages of this 1-1/8 miles. Jockey Paco Lopez is a past Monmouth riding champion and very aggressive early in races, so he will keep pressure on the favorite if NY Traffic breaks in his usual manner. Longshots Jesus’ Team, Ancient Warrior and Lebda also have exhibited early speed against lesser competition. Their presence could increase the tempo.

Rain-drawn Dr. Post benefits if the pace quickens. He exits a clear second in the Belmont Stakes and will be ridden by Monmouth’s all-time leading pilot Joe Bravo for the first time. Bravo scored the 2004 Haskell aboard Lion Heart. With major racing jurisdictions in New York and Maryland limiting the movement of jockeys due to COVID-19 concerns, several Monmouth-based riders are beneficiaries of mounts in this $1 million local showcase. Dr. Post’s trainer Todd Pletcher won this race in 2006, 2007 and 2013 with Bluegrass Cat, Any Given Saturday and Verrazano – the first of which, like Dr. Post, was a Belmont Stakes runner-up.