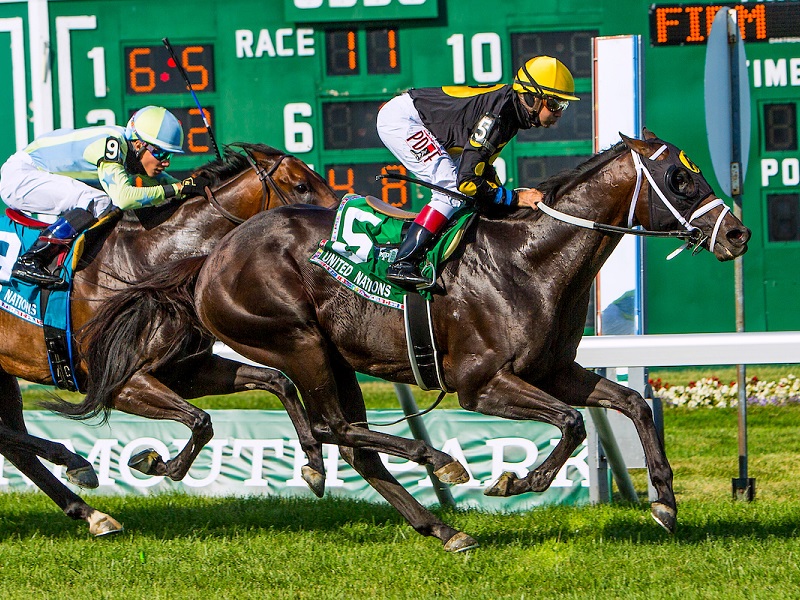 Each Monday, I’ll select my Most Valuable Pony from the previous week’s racing action around the country. Who won the week? It could be a breakout performer, a known stakes commodity or the horse lifting the most loot. Chime in on Twitter @Xpressbet with your thoughts on who should be each week’s MVP.July 13-19, 2020MVP: AquaphobiaOwner: Paradise Farms Corp., David Staudacher, Hooties Racing LLC and Skychai Racing, LLCTrainer: Mike MakerJockey: Joe BravoPerformance: The 7-year-old veteran earned his first major stakes win when pouncing late to capture the July 18 Grade 1 $315,000 United Nations at Monmouth Park. Under all-time leading local rider Joe Bravo, Aquaphobia reeled in loose leading Paret to secure the 10-1 upset over the likes of Grade 1 winner Arklow in the 1-3/8 miles test. This son of Giant’s Causeway and Grade 1-winning sprinter Pussycat Doll became another in a long line of high-dollar claims for Mike Maker to make their mark in these turf marathon graded stakes. Aquaphobia was claimed for $62,500 in January at Gulfstream Park.On Tap: Aquaphobia has raced at middle distances throughout most of his career, so he’s at a cross-roads now after this score. The Grade 1 Turf Classic on Kentucky Derby Day Sept. 5 at a mile and one-eighth could fit nicely. There’s also the Aug. 29 Grade 1 Sword Dancer at Saratoga if they choose to add more distance. Maker typically supports the Kentucky Downs schedule in September with options like the Tourist Mile on Sept. 7 on the cut-back or the Sept. 12 Kentucky Turf Cup at a mile and one-half. There’s not an obvious Breeders’ Cup divisional fit for him via the Mile or Turf, so his next start could determine if he’ll head in either direction.Honorable Mentions: The big one went to Authentic, who scored his third graded stakes win of the season by leading wire to wire in the July 18 $1 million Haskell at Monmouth Park. The 3-5 favorite worked harder than expected in holding off Ny Traffic by a nose. At Saratoga, Yaupon announced his presence as a 3-year-old sprinter to watch. He rolled to 2-for-2 lifetime in a July 18 allowance, coasting home 6 furlongs in 1:09.33 for a Steve Asmussen barn deep with dashers. Meanwhile, the Into Mischief filly Dayoutoftheoffice notched her second blowout win in two starts by romping to a 6-length victory in the July 16 Schuylerville. Tim Hamm trains the 19-1 upsetter. Finally, turf sprinter Wellabled rocketed to the front and led all the way in the July 15 Honor the Hero Stakes at Canterbury Park. The 7-year-old alum of the 2016 Breeders’ Cup Juvenile Turf won for the eighth time in just 15 career starts.