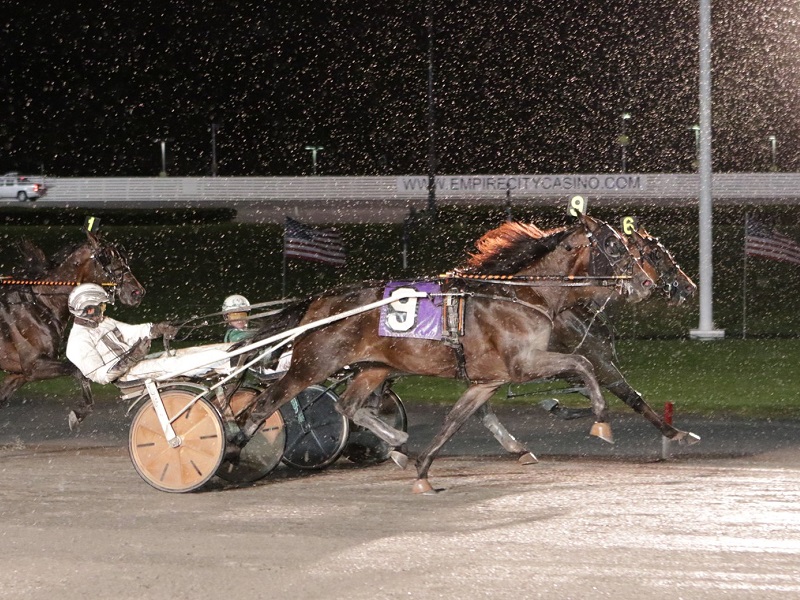 Hall of Famer Brian Sears was in the bike as Top Flight Angel came out from third near the 3/4-mile mark, wore down the even-money favorite in mid-stretch and held on by a nose in 1:56.3 after elimination winner Yes Mickey joined the top pair with an inside bid from the pocket.

Top Flight Angel paid $16.20 to win and capped a big night for Sears, who won his third Yonkers Trot and guided Downbytheseaside to victory in the co-featured, $540,000 Messenger Pace earlier on the card.

"I thought he raced well last week" when he closed for third in the elimination, Sears said. "I just wanted to nurse him out of there after I saw a couple of them stand on their heads early. I sat as long as I could."

Sears didn't waste any time with 1-to-9 favorite Downbytheseaside in the Messenger, but the photo-finish camera was needed again to reveal that he won the second jewel of the Pacing Triple Crown by a nose in 1:52.1.

As the rain intensified, Sears vacated the 3-hole early and sent Downbytheseaside past Blood Line (Mark MacDonald) to the lead after a quarter mile. Blood Line back-pedaled near the 3/4-mile mark in 1:24.1, but Miso Fast (Matt Kakaley) continued to pursue off a first-over trip, Art Scene (Jordan Stratton) ducked to the vacant pocket and Funknwaffles (Corey Callahan) loomed third-over, setting the stage for a dramatic finish.

Downbytheseaside held off Art Scene by nose and a surging Funknwaffles by a half length to win for the eighth time this year for trainer Brian Brown and co-owners Country Club Acres, Joe Sbrocco, Richard Lombardo and Diamond Creek Racing. The 3-year-old son of 2008 Messenger winner Somebeachsomewhere, reached $956,216 in earnings.

"It was a different week and a different track (with the rain)," Sears said. "It was closer than I would have wanted, but they’re going to make you work for it and he dug in."