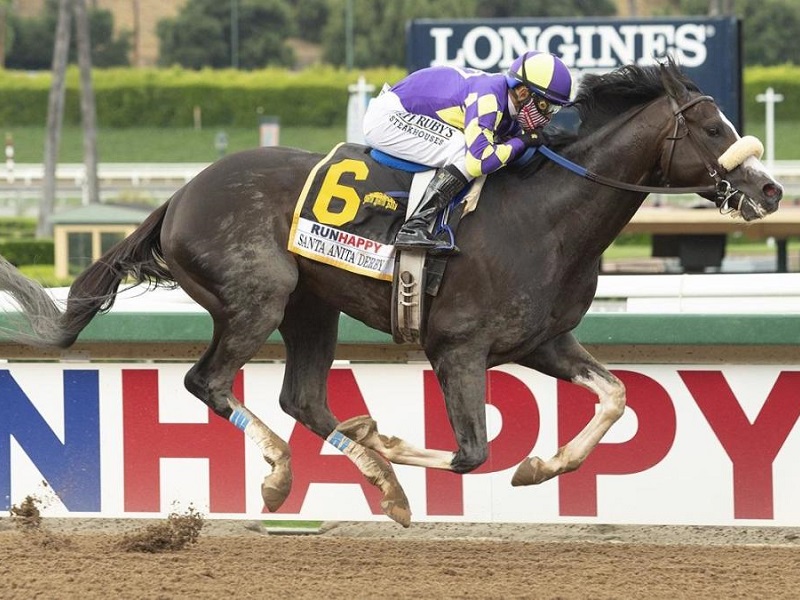 It’s another great Saturday for racing. After all, any day where Midnight Bisou, McKinzie, Honor A. P., Tom’s d’Etat and Code of Honor are in the entries is going to be a good one.

Racing at Saratoga kicks off at 1:10PM ET and their 12-race card includes five stakes races, including the G1 Whitney and G1 Personal Ensign. Out west at Del Mar, the action starts at 5:00PM ET and features the G1 Bing Crosby and the ungraded Shared Belief, a ‘Road to the Kentucky Derby’ Points race.

Also, we’re excited to kick off the all-new Fun in the Sun Handicapping Tournament this weekend. For just a $25 Entry Fee and $100 Bankroll you can take your shot at winning big cash prizes by betting the top races at Saratoga and Del Mar.

I’d tell you why Fun in the Sun is such a great tournament, but my colleague Johnny D beat me to it and did a far better job of explaining than I ever could have.  Here are his thoughts.

We’re also offering a Money-Back Guarantee on three stakes races this weekend, including the Whitney and Adios, as well as a massive 3 Million XB Rewards Point Split.  We highly recommend checking those out – playing along reduces your risk and puts more cash and Points in your account.

But enough advertising – here’s a look at Saturday’s big races:

The downside: only five horses entered. The upside: this group is a combined 14: 9-3-1 this year, showing that losing has not been part of the equation for this quintet. TOM’S D’ETAT is a standout and a perfect 3-for-3 in ’20, including wins over BY MY STANDARDS (Stephen Foster) and IMPROBABLE (Oaklawn Mile). This race goes through him, but I’m pegging IMPROBABLE for the minor upset. When TOM’S D’ETAT beat IMPROBABLE in the Oaklawn Mile, IMPROBABLE was stuck in the outside post (11) which ensured a less-than-ideal trip. His subsequent win in the Hollywood Gold Cup was great and he seems to finally be living up to his potential. CODE OF HONOR is 2-for-2 at Saratoga but may be too pace-dependent in a race that is more tactical.

A strong field of 11 is signed on here, including G1 Woody Stephens winner NO PAROLE, G3 Swale winner MISCHEVIOUS ALEX, G1 American Pharoah winner EIGHT RINGS and Belmont Stakes fifth-place finisher, TAP IT TO WIN. I think the pace is going to be quick here, given the inside-drawn EIGHT RINGS, the incredibly quick NO PAROLE, and the presence of MISCHEVIOUS ALEX and TAP IT TO WIN.  If they go fast early, THREE TECHNIQUE should have a big shot. He hasn’t raced since March 14 – a big concern – but he has run well at Saratoga and is 4: 2-2-0 in one turn races.

Please note, UNCLE CHUCK is a planned scratch from this race and will instead run in the G1 Travers next Saturday. With that defection in mind, HONOR A. P. is going to be awfully difficult to beat. He handled next-out G1 Haskell winner Authentic with ease in the G1 Santa Anita Derby and continues to show more tactical speed with each race. Bob Baffert’s CEZANNE is a bit of an enigma. Coolmore bought him at auction for $3.6 million and he’s a perfect 2-for-2, but he’s yet to throw a ‘wow’ performance. His maiden and first-level allowance wins were more workmanlike than flashy and he’s going to need to step up to handle HONOR A. P.  THOUSAND WORDS ran better in the G3 Los Alamitos Derby but he’s clearly not on par with the highest regarded horses in the Baffert barn.

If there’s a time to beat MCKINZIE, I think it’s here. You have to admire what this horse brings to the table, but he might have lost a step (he can still beat this field having lost a step, mind you), but, most importantly, there’s no evidence to suggest he’s a true sprinter. He has excelled in stretch-out sprints (7 furlongs and one-turn miles), but what happens when he runs in a six-furlong dash? It’s to be determined and I don’t want to pay 4/5 odds to find out. I’ll take my chances with COLLUSION ILLUSION, a three-year-old that has won both races this year. He’s a perfect 4-for-4 in sprint races, a perfect 2-for-2 at Del Mar and should take advantage of a good setup from just behind the pacesetters.  He should get the jump on MCKINZIE. Can he hold him off?  I’ll take much nicer odds to find out.