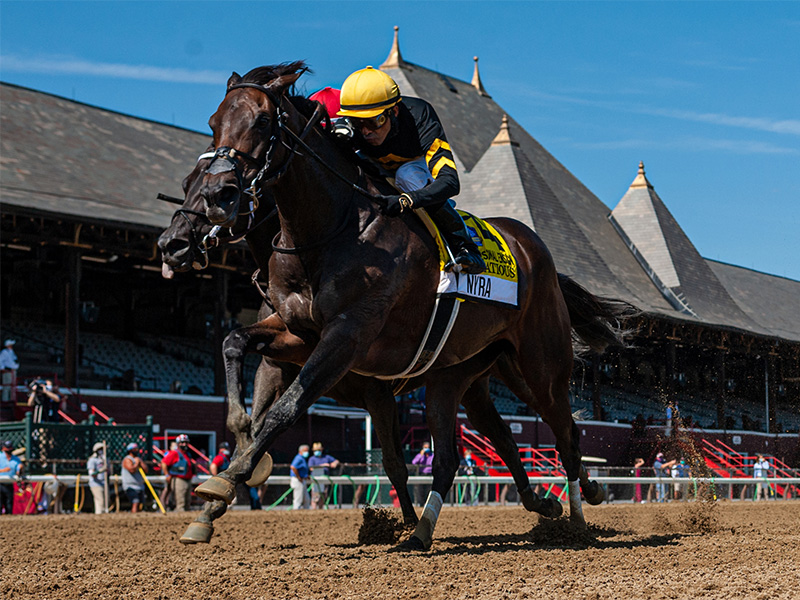 Each Monday, I’ll select my Most Valuable Pony from the previous week’s racing action around the country. Who won the week? It could be a breakout performer, a known stakes commodity or the horse lifting the most loot. Chime in on Twitter @Xpressbet with your thoughts on who should be each week’s MVP.

Performance: Vexatious picked a fine time to land her first victory on dirt since breaking her maiden at Del Mar in 2016, upsetting last year’s champion older female Midnight Bisou in Saratoga’s Grade 1 Personal Ensign on August 1. From a first-over, pressing position, Vexatious assumed the lead at the quarter-pole and immediately was joined by Midnight Bisou. The duo slugged it out the length of the stretch and the eventual winner had to survive a claim of foul. Vexatious was 9-1 third choice in the field of five. The victory was a career-topper, trumping her Grade 3 Dowager victory on turf at Keeneland in 2018 (a race she won via disqualification), and snapped a 9-race losing streak dating back to that one.

On Tap: The Breeders’ Cup Distaff at Keeneland will be in the cards. Likely stepping stones to that race could include the Sept. 4 Grade 1 La Troienne at Churchill Downs on Kentucky Oaks Day, or October’s Grade 1 duo of the Beldame at Belmont Park or Spinster at Keeneland. Vexatious finished fifth in last year’s Spinster.

Honorable Mentions: California raider Improbable got a perfect trip, capitalized on a stumble by heavily favored Tom’s d’Etat and scored a solid, 2-length victory in the Grade 1 Whitney at Saratoga on August 1. It was his second straight Grade 1 win following the Gold Cup at Santa Anita, and he turned the tables on Tom’s d’Etat from April’s Oaklawn Mile victory. Echo Town romped late in the Grade 1 Allen Jerkens at Saratoga on August 1, drawing off by 3-1/2 lengths, but did not dazzle on the clock. He gives Steve Asmussen another BC Sprint candidate to go with Volatile. Thousand Words went wire-to-wire to win the Shared Belief Stakes on Aug. 1 at Del Mar, defeating Santa Anita Derby winner Honor A.P. and stamping his ticket to the Kentucky Derby. And finally, Bob Baffert’s huge weekend concluded with Fighting Mad scoring a wire-to-wire win Aug. 2 in the Grade 1 Clement Hirsch over top west coast distaffers Ce Ce and Ollie’s Candy.