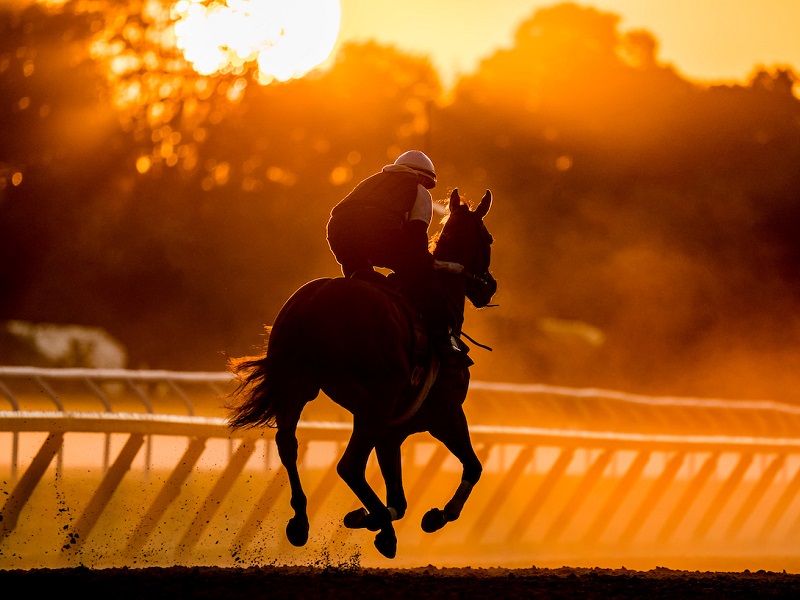 XBTV workout analysts Zoe Cadman and Millie Ball have been trackside and working the shedrow to give you morning insights into the 2020 Travers Stakes contenders.

Zoe's Take:  have been at Saratoga now for 5 weeks, and my first stop on this trip was to see Tiz the Law up close and personal. What struck me was surprising. Speaking to assistant Robin Smullen, she referred to Tiz as a “Pocket Rocket.” This puzzled me at first, so I went to take a closer look. What I found was a robust horse, but one who is really not at all as big as he looks on TV. He’s 15.3-3/4 hands high, according to Smullen. His size helps to not hinder this athletic colt. Full of personality, he’s a tiger on the track and I really like the way he can extricate himself from trouble due to his athleticism.

As for his works? Let’s get to work! His last 3 works have been picture-perfect, all solo and within a half-second of each other.

At 5:30 a.m. on August 1 (5 furlongs in 59.94), Tiz left the pony (ridden by his octogenarian trainer Barclay Tagg) full of energy, head cocked under exercise rider Heather Smullen (Robin Smullen’s niece). Once settled in a nice rhythm past the seven-eighths pole, he went down the backside straight and true under a snug hold. Tiz the Law clicked off perfect 12s and covered his first 3 furlongs in :36-1/5. He turned for home, and under little (if any) urging, he came home in fine fashion as straight as a string! The Belmont winner galloped out 6 furlongs in 1:13-1/5. This was a super work for a colt who seems to keep getting better; he literally looked like he went in 1:02.

While Bob Baffert’s Uncle Chuck is being referred to as the next Arrogate, Tiz the Law is a colt who just keeps ticking all the boxes. Should he and Uncle Chuck get stuck in a pocket, I will take Tiz the Law to extricate himself from trouble and keep going. That’s food for thought as we look forward to the first Saturday in September after the Travers.

Zoe's Take: The new addition to the Bill Mott barn after a private purchase, this progressive son of Algorithms looked good rallying from a long, long way back in the Ohio Derby in his last start. South Bend has showed renewed energy in his gallops of late since coming to Bill’s barn.

On August 2 (5 furlongs in 1.00.70), he worked on Saratoga’s Oklahoma training track, which typically yields slower times. South Bend broke off just a length behind a rather happy Tacitus, and soon engaged him at the three-eighths pole under Canada’s Sovereign Award-winning ex jock Neil Poznasky. What I really took from this work was how close he was while not being asked. This is a horse who typically rallies from far back; I’m thinking after watching this work that South Bend can be closer to the pace. That’s going to help. I loved the way he was allowed to win the work, something he's not done in a while (although Tacitus, for want of a better word, is an inexplicably bad work horse). The gallop-out was good, while not eye-catching. This was a good work for a colt with plenty of upside. Jose Ortiz will ride for the first time, which I think will certainly help him be right there.

Zoe's Take: The Peter Pan winner looked like he wasn’t really relishing the track the day he won at Saratoga, although the he came to Caracaro his ears went up and he coasted to the wire, indicative of a horse who has more in the tank!

On August 1 (4 furlongs in 47.66), Country Grammer worked in company over the Saratoga main track with Valid Point, who is always an excellent work horse. Country Grammer looked sharp in this faster-than-usual Chad Brown work, and finished under mild urging while never getting by Valid Point (Grade 1 Secretariat winner on turf). He seems to be handling the main track just fine now.

Zoe's Take: This lightly raced son of Uncle Mo was recently second to County Grammer in the Peter Pan, in which he gave up the lead late in his first start going one and one-eighth miles.

On August 1 (6 furlongs in 1.15.99), it was a rather odd work with jockey Javier Castellano aboard. He entered the track close to 9 a.m. and his work was rather more like a ‘2-minute lick’ as he was not asked for anything, In fact, it seemed more like an exercise in getting him to relax and finish. Breaking off at the three-quarter pole, he was in hand until the quarter-pole, and appeared to lean out down the lane and all the way around the turn, steadily drifting out the whole way under Castellano. I would have like to have seen more from this colt.

Millie's Take: XBTV has been following Uncle Chuck's morning activity closely, beginning with his works prior to his debut, then preparing for his win in the Grade 3 Los Alamitos Derby, and now, his four consecutive works at Del Mar that ready him for the Grade 1 Travers. On July 26, the undefeated colt worked 6 furlongs in a bullet 1:12.20 with his last eighth being his strongest. He was asked to gallop out an additional 3/16ths of a mile and did so obligingly. He strikes me as an intelligent horse, constantly motioning his ears back and forth waiting for an order from the rider.

His final breeze on August 1 was given an official 5-furlong clocking of 1:00.20, however he proceeded to gallop out with such gusto for an additional two furlongs, the work visually resembled more of a seven-eighths drill. He galloped out the mile on his trainer's stopwatch in 1:39.60. Bob Baffert was very happy with his colt, remarking, "I can't see a mile and a quarter being a problem for him." Uncle Chuck's stride is so large you can see the heels of his feet! And this, combined with its efficiency, leaves a lasting impression. The two Peter Eurton trainees that were following in his wake on this particular morning were employing two strides to his one. In addition to this, he is able to maintain a rhythm well past the point of the work concluding.

While the track at Del Mar has been glib, Uncle Chuck makes it look easy to get over. He exudes class on the track and is very professional when being put through his paces. He is purposefully worked by himself, in fear of him getting aggressive in company (in truth, I don't know if anyone could fairly keep up with him) and his strong gallop-outs have rendered him fit. Baffert's barn is currently firing on all cylinders, winning three Grade 1s across the nation in the last 3 weeks (Authentic, Improbable and Fighting Mad).

Although Thousand Words, second to Uncle Chuck in the Los Al Derby, flattered his stablemate's credentials by returning to win the Shared Belief Stakes, it's fair to say Uncle Chuck hasn't faced anyone close to the caliber of Tiz the Law. If he validates himself in the Travers, he will most likely be the favorite going postward in the Kentucky Derby.