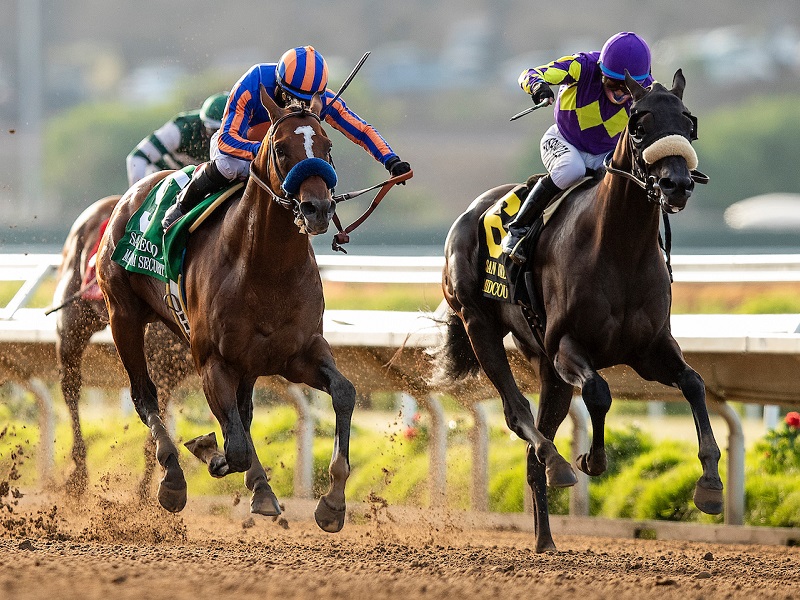 Couple the great racing with Del Mar’s popular wager menu and big pools and these races and bets are simply too good to pass up.

Before we look at the Late Pick 5, I did want to throw in three quick Xpressbet commercials:

Here’s my take on the Late Pick 5:

What makes this sequence so appealing is the potential single of #1 UNITED (8/5) in the first leg. This horse loves Del Mar (2-for-3 lifetime) and seemingly drew perfectly for his preferred ‘up close’ running style. He’s going to be the one they’ll need to catch late and while he never makes it easy on his backers (the finishes of his last five races were separated by a combined 1 1/4-lengths), he knows how to find the wire and get his nose down on it.  Larger tickets could easily include #7 RED KING (8/1), #10 ORIGINAIRE (5/1) and #5 WARD ‘N JERRY (10/1) (probably in that order).

I see the potential for a speed duel in this one between #4 TAKE THE ONE O ONE (8/1) and #8 KERSHAW (9/2), which would open things up for someone from just behind that duo.  #6 EXTRA HOPE (5/2) flirted with the Kentucky Derby Trail in 2019 but was a cut below Improbable, Mucho Gusto, etc. He hasn’t raced since last November, but he has kept good company and might be the one to beat. #5 EL TIGRE TERRIBLE (4/1) probably doesn’t want to go around two-turns, but he’s 3-for-4 on Del Mar dirt and ran big in a state-bred stakes race on July 31 going 7-furlongs.  #1 UNBROKEN STAR (12/1) and #3 POTANICO (7/2) have the tactical speed to sit just behind the pacesetters and both should benefit from inside draws.

I thought #5 MAXIMUM SECURITY (1/1) showed plenty of guts when he won the G2 San Diego Handicap by a nose on July 25. That was his first race since the G1 Saudi Cup, his first start for Bob Baffert and his first start with Abel Cedillo in the irons. So hopefully they all learned something. He’s once again drawn well and should be able to stalk the pace just off #1 MIDCOURT (7/2). I’m not sure that one wants to go 1 1/4 miles and the only other horse in here that worries me, #2 HIGHER POWER (3/1), has yet to show he’s a threat following last year’s Pacific Classic win. So for me it’s all about MAXIMUM SECURITY in his second start off the layoff.

Despite an overflow field for the nightcap, I’m focusing my bet on the two top jockeys at Del Mar – Flavien Prat and Umberto Rispoli.  Prat is on #4 SHADOW SPHINX (7/2) and Rispoli rides #5 SALVATOR MUNDI (9/2). Both horses are incredibly versatile and each is in good form, with ‘SPHINX entering off a win and ‘MUNDI off a runner-up effort.  A potential ‘from the clouds’ type would be #7 THREE AY EM (8/1).