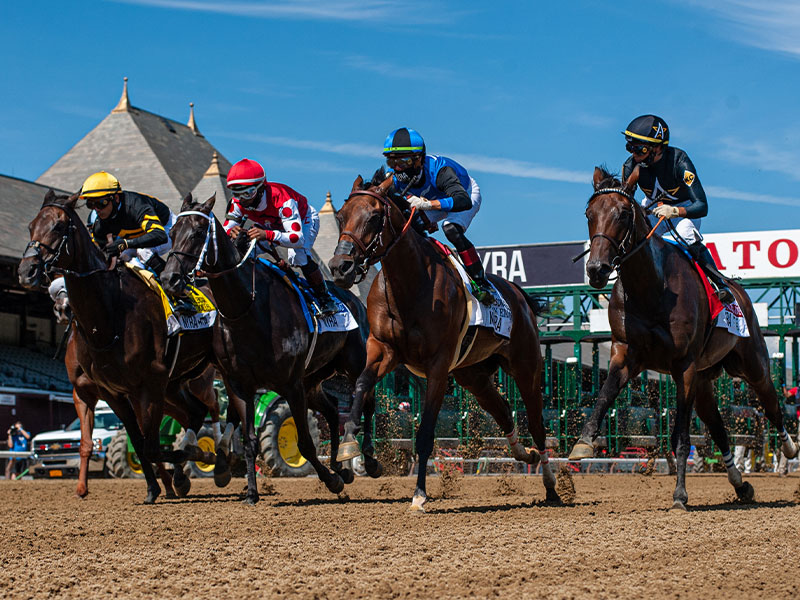 Forecast: State-bred older maidens sprint five and one-half furlongs on grass in the Friday opener, with Silver Token the one to beat after missing by a nose with a less-than-ideal trip over this course and distance last month. Comfortably placed outside, the Mizzen Mast gelding will have clear sailing while likely to enjoy a pace-stalking trip and have every chance to seal the deal from the quarter pole home. Advanced Strategy, a close fourth with no visible excuse in the same race ‘Token exits, adds Lasix for the first time so he has a right to produce a forward move in what will be just his third career start and his second off a long layoff. J. Rosario stays aboard and will produce him late. The Golden Door, a debuting Point of Entry colt from the D. Donk barn, shows a long series of moderate drills at Belmont Park but he actually looked quite good in a :10 1/5 breeze during the preview session of the 2019 OBS April sale, where he brought $90,000 through the ring. At 8-1 on the morning line in a race in which the favorites aren’t world beaters, he’s worth including somewhere on your ticket.

Forecast: In a below average maiden special weight nine furlong event that drew just six runners, let’s take a stand and single The Angry Man. With rising speed figures in each of his four career starts and returning to the main track, the son of Summer Front could find himself as the controlling speed or at least in a pace-pressing position in a race with soft early fractions. With even a modest forward move, the 3-year-old gelding seems quite capable of earning his diploma, so at 9/5 on the morning line we’ll make him a win play and rolling exotic single.

Forecast: Golden Pal, an outstanding second (beaten a neck) in the Norfolk S.-G2 at Royal Ascot, returns to the States and is listed at 3/5 on the morning line despite the fact that he’s still a maiden after two starts. We doubt he’ll remain winless after today. By Uncle Mo from the sensational turf sprinting mare Lady Shipman, the W. Ward-trained colt is nicely drawn outside of six and can bust to the front or settle and stalk depending upon what his uncoupled stablemate, Fauci, decides to do while breaking just inside of him. In any case, we’re expecting ‘Pal to exert his superiority when it counts as a short priced, rolling exotic single.

Forecast: Citizen K has done enough in the morning to indicate he’s fit and ready to win first crack out of the box in this state-bred juvenile sprint. The son of Mizzen Mast looks to have plenty of quickness, lands the cozy outside post, and in a field that doesn’t appear all that strong may be capable of taking control right from the start. At 5/2 on the morning line we’ll make him a win play and rolling exotic single.

Forecast: We’ll spread this starter’s allowance turf sprint going three-deep in our rolling exotics while preferring Standup on top. A late-running sprinter that will need good racing luck and some help up front, the Into Mischief gelding finished a strong third in a similar affair last month, retains J. Rosario, and should be capable of producing the last run. My Man Flintstone so far in his career has preferred to finish second (five times) rather than win but he’ll have clearing sailing with a pace-pressing journey from his outside draw and really won’t have to improve much to beat this field. His only prior grass sprint was trouble-filled so we suspect he’ll handle the surface switch just fine. Unprecedented was a close fourth in the same race Standup exits while earning a career top number and today switches to I. Ortiz, Jr., so we’ll toss him in as well.

Forecast: Princesa Carolina, a smart debut winner last fall and then a highly-respectable third in the Breeders’ Cup Juvenile Fillies Turf-G1, makes her sophomore debut in this first-level allowance affair and has trained well enough to pick up where she left off. The daughter of American Pharoah from the C. Brown barn (a superior 29% with layoff runners) has excellent tactical speed and should draft into a comfortable second flight, stalking position and then kick on with it when set down. J. Castellano remains aboard and knows her well, but at 6/5 on the morning line she’ll probably be too short to play other than as a single in rolling exotic play.

Forecast: I’ll Take the Cake is a dangerous Florida shipper in this extended sprint for $40,000 claiming fillies and mares. She remains above her claim level for clever connections and though overmatched and well-beaten last time out can get back on track with a repeat of her race before last. An 11-time winner, the 6-year-old mare has had only two starts this year so she’s fresh and apparently spot on following a recent bullet half-mile workout (:47 2/5, fastest of 36) over the local main track. The barn’s “go to” rider, T. Gaffalione, takes the call. Jump for Joy moves up a notch following a solid win for $32,000 last month and in her present form the veteran mare should be set for another top effort. Always thoroughly genuine and consistent (first or second in 16 of 26 career starts), the daughter of Jump Start has the ideal stalking style for this extended sprint trip and with J. Ortiz staying aboard she should have every chance from a pace-forcing position.

Forecast: Freewheeler, away since last November, won his debut over this course and distance so we know he can fire fresh and has done enough in the morning to have him fit enough in this abbreviated turf sprint for first-level state-bred allowance horses. The T. Pletcher barn has a superb record with comebackers (29%) so we’re expecting this son of City Zip to be difficult to deny, but at a very short price. For protection in your rolling exotics, you may want to consider another layoff runner, Noble Emotion, a first-time gelding making his first start since last fall. A smart juvenile maiden sprint winner at Belmont Park, the son of Noble Mission has good connections and a healthy if not flashy work tab. He could easily be a better type now than last year.

Forecast: Kept Waiting was worn down right near the wire when a runner-up in a similar maiden special weight turf router here last month but at this slightly shorter trip the daughter of Broken Vow should be hard to beat. With other speed types drawn inside her, the M. Micelli-trained filly likely will settle into a stalking position and then have dead aim when it counts. Micromillion probably is the most dangerous of the closers and could step forward after finishing a willing runner-up in a maiden claimer here last month in her first start since February. Though she’s stepping up in class today, the T. Pletcher-trained filly is a fit on numbers and has hit the board in each of her five career starts.