Six Races You Can’t Afford Not to Bet Saturday 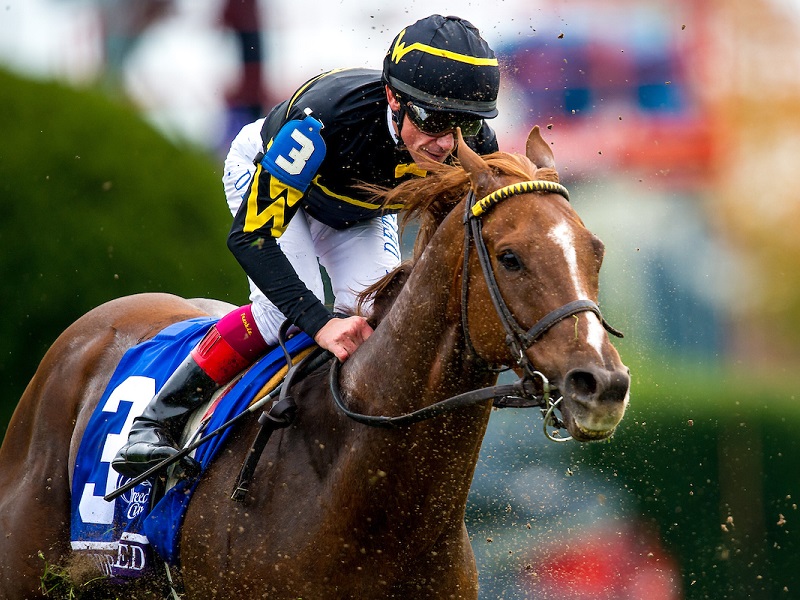 I know what you’re thinking – Saratoga and Del Mar just ended, and if there was ever time for a horseplayer to catch a brief respite, it’s this weekend.  After all, Gulfstream is closed due to Hurricane Irma, Belmont is off to a relatively ‘soft’ start, California is racing at Los Alamitos and Monmouth is also in the final legs of its impressive meet.  Plus, your friends and family haven’t seen you on a Saturday afternoon or evening in weeks, so I understand the allure of getting back out there.

But before you make that decision, hear me out.  There is a lot of good racing Saturday.  Need me to prove it?  No problem.  Kentucky Downs, regarded as North America’s top track by the Horseplayers Association of North America (HANA) is in action with four stakes races (three graded), and there’s also stakes action at Belmont, Louisiana Downs (seven stakes), Finger Lakes (two stakes), Woodbine, Laurel, Hastings and more.  In total, more than 25 stakes races will compete for your wagering dollars this Saturday.  That’s a pretty big number for an ‘off’ weekend, don’t you think?

Here are the six I’m most excited to bet, along with my picks for each:

Juvenile New York-breds are on display at Finger Lakes in the Aspirant Stakes (Race 7) and one race earlier in the Lady Fingers Stakes (Race 6).  Both races are included in the Late Pick 4, Late Pick 3 and Pick 5.  Handicapping the race, my focus is on #8 LOOKING READY, who ships into Finger Lakes for regarded conditioner Bruce Levine.  Frankly, I think he’s a single in all of the exotic bets.  He was bet heavily in his debut (he finished 3rd behind next out stakes winner, Aveenu Malcainu) and broke his maiden by 2-lengths on August 17 at the Spa.  He fired a bullet workout on September 2, drilling 4f in :47 3/5, and he appears to be ready to roll under the top jock at the Finger Lakes, John Davila Jr.  He would be highway robbery anywhere near his 4/1 morning line price.

It’s interesting that Mark Casse is connected to three of the runners in Saturday’s Ontario Debutante.  He trains #1 SLY ROXY, a Saratoga maiden winner who finished 5th in the Grade 2 Adirondack, and #2 SHAMROCK ROSE, who makes her first career start here.  Plus, he bred #5 HONEY GRAEME, who won her debut at Saratoga in August for Rick Violette.  I’m a big concerned by SLY ROXY’s draw.  She has the perfect stalking type for a comfy outside draw, but Saturday’s draw may not be as favorable.  If nothing else, it’s a knock on her value.  For that reason, I’m going with HONEY GRAEME, despite the fact that this is her synthetic debut.  She beat a next-out winner in her debut (Quick Quick Quick) and that outside draw may make the difference.

Speed looks to be the name of the game in the Laurel’s $75,000 Challedon Stakes, as #3 RED DRAGON TATTOO, #5 ANYTIME ANYPLACE and #6 AFLEET WILLY all strike me as horses that aren’t going to do any running from far out of it.  That could set things up for a horse that wants to stalk from just behind, and the best of those is #7 IT’S THE JOURNEY.  The Mike Trombetta-trainee has won three straight at Laurel and has shown the ability to rate from midpack.  If the pace really crumbles, #1 ROCKINN ON BYE could be the best bet.  He has chased the likes of Divining Rod, Whitmore, Vorticity, Shaft of Light and Phlash Phelps this year, and he finished second in this race last year, beaten just ¾-length.

For me, the day’s best bet is #4 MR. MISUNDERSTOOD, who brings a perfect 4-for-4 turf record to the inaugural turf edition of the Super Derby.   A staple at Louisiana Downs since 1980, the Super Derby has been won by the likes of Tiznow, Sunday Silence, Alysheba, Seeking the Gold and Gate Dancer.  And while this year’s winner won’t be held with that level of reverence, he will reward his backers with money in their pockets.  MR. MISUNDERSTOOD won the local prep for this, the $60,000 Prelude Stakes, by 2 ½-lengths and is my single in the $75,000 Guaranteed Pick 4, which spans Races 8 – 11.

When betting all tracks, it’s pretty important to look for ‘horses for the course’ – entrants who have previously run well at the track.  At a quirky track like Kentucky Downs, it’s darn near an essential.  Problem is, they run such few days (only five this year) that it’s tough to have consistent success there.  After all, you only get one chance a year.  In the Kentucky Downs Turf Sprint, we’ve got last year’s runner-up, #10 HOGY, and Group 1 winner, #7 UNDRAFTED, who has finished in the Trifecta twice previously on this unique course.  He attracted top Kentucky Downs jock, Florent Geroux, and gets a tepid nod from me.  I don’t foresee the pace being quick enough to cater to Undrafted’s late punch.

One of Kentucky Downs’ signature races, the $600K Turf Cup, attracted an overflow field of 14, loaded with stellar entrants like course veteran, #4 OSCAR NOMINATED, recent Grade 3 winner, #1 POSTULATION, Arlington Million fourth-place finisher, #7 ENTERPRISING and turf marathon veteran, #11 TAGHLEEB.  For my eye, OSCAR NOMINATED is the horse to beat.  He won his only start at Kentucky Downs by 6 ¼-lengths and has been facing much tougher horses in his last three starts – the Grade 1 Turf Classic (3rd), Grade 1 United Nations (7th)and Grade 1 Arlington Million (8th).  To his credit, he wasn’t beaten more than 4 ½-lengths in any start.  If he gets clean sailing, he should run a big one.  That said, this race is wide open and Kentucky Downs is known for its low takeout exotic wagers.  Jump in and use as many as you can afford – you may just hit big!