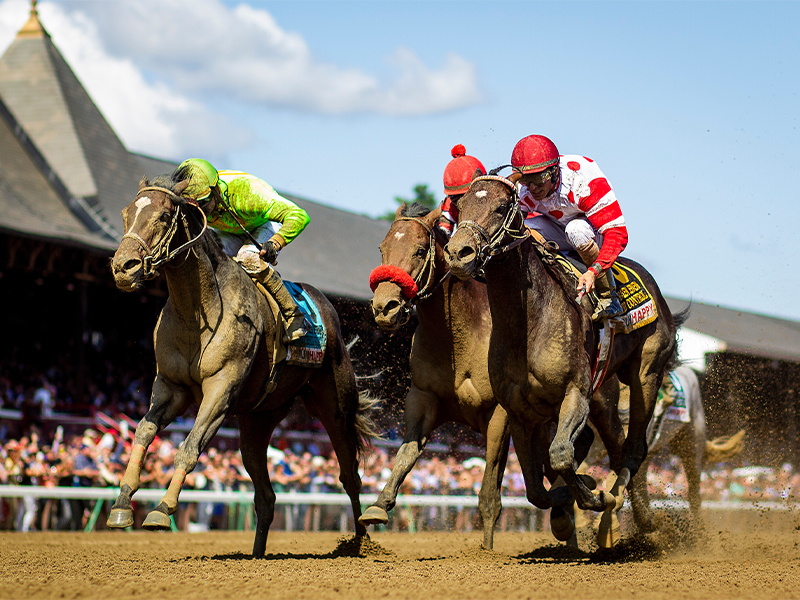 The final four Saturday Spa races provide a challenging sequence. Two Grade 1 stakes races—a loaded 7-furlong sprint and a collection of familiar faces going a mile and one-half—offer plenty of options to horseplayers. A maiden 2-year-old heat and a first level, state-bred allowance race, with 9 and 12 runners, respectively, don’t make things any easier. Of course, hitting Pick 4 wagers never is easy. This one, though, ought to reward those that can bring it to its knees. Below is one man’s humble attempt at a knockout punch. At best, perhaps, we can put you on a four-bagger. At worst, you might extract a handicapping nugget or two that aids your construction of a winning Pick 4 wager.

Race 8 – Forego Stakes
This is a loaded race with some real tough competitors signed on to exchange blows over seven furlongs. If you don’t like #2 Whitmore, then you don’t like horseracing. He’s a pro that shows up every time. He’s not always good enough to win but he’s always trying. Including the 2018 BC Sprint, #2 Whitmore has made 12 starts and has won 3 races with 4 seconds. He’s lost to the following foes: Roy H; Mitole (3 times); Maximum Security and Volatile! This is a tough race and #2 Whitmore is 7 years old and needs some pace to run at, so he’s no cinch. But we’d hate for him to beat us.

#3 Lexitonian shipped to California and nearly won the Gr. 1 Bing Crosby with a powerful late kick. This field is tougher than that one was but the 4-year-old clearly is in good form.

#6 Complexity is a sharp allowance winner for Chad Brown. He’s won 4 of 7 starts, is 1-for-1 at Saratoga and 1-for-3 at the distance. He cuts back from a one-turn mile win at Belmont. His past performances are nearly schizophrenic as his losses are complete blowouts. He’s got a Gr. 1 win, but it came at 2 in the Champagne.

#8 Firenze Fire has had a nice career with a reputation somewhat diminished by guilt by association. He transferred from federally indicted trainer Jason Servis’ barn to Kelly Breen’s outfit three races ago. He’s won one of those starts—Gr. 2 True North. Overall, he’s racked up 11 wins in 27 starts and that’s against quality foes, too. He’s earned nearly $2 million! Like #2 Whitmore, he’s been beaten by the very best—Volatile, Vekoma, Mitole, Imperial Hint—and none of those monsters are in here, so he’s got to be respected.

#10 Mind Control (pictured above) won the Gr. 1 Allen Jerkens at Saratoga last year against fellow 3-year-olds and then added a pair of Gr. 3 Aqueduct scores to his resume in January and March. He appeared to not like a sloppy track in the Gr. 1 Carter but bounced back with a solid try in the Vanderbilt against #2 Whitmore and #8 Firenze Fire. Seven wins in 14 starts, plus 2 out of 3 at the Spa and 4 of 7 at the distance make this guy a ‘must use.’ This outside post position also should help matters.

#11 Fortin Hill is a wild card in this race. He’s won 3 of 4 starts for Chad Brown and, therefore, can’t be ignored. He has no stakes experience and, obviously, has lingering physical issues—he’s raced in Oct. ’18; June ’19; April ’20 and July ’20. Perhaps Brown has him finally healthy enough to put two races back-to-back, but what a bunch of pros to have to defeat in your first stakes try!

Race 9—Sword Dancer
Five of these 8 runners come out of the same race—Bowling Green, Aug. 1—and 4 of those finished within 2 lengths of each other. That afternoon, #8 Sadler’s Joy closed well, arrived first, but was disqualified for drifting in and causing interference. That’s a shame because the 7-year-old produced one of his best races in a while and the win would have snapped a winless streak that extends back to November of ’19. Can he duplicate the effort? He’s got to stay wide, in the clear, so he can launch his closing charge.

#6 Cross Border ran as well as #8 Sadler’s Joy and was bothered by the original winner. He was a mere neck back at the finish and may have been best. By virtue of a stewards’ decision he kept an amazing Saratoga turf course streak alive with 5 wins in as many tries. That’s impressive, even if he needed help from above in the stews stand to keep it going. These two runners--#6 Cross Border and #8 Sadler’s Joy must be respected right back in the Sword Dancer.

#1 Highland Sky closed reasonably well on the outside of all the commotion and was not hindered at all. He ran well, but he’s 1 for his last 9 and that win came in a restricted stakes race. He’s also never hit the board in 4 tries at the distance.

#5 Channel Maker originally was fourth in the Bowling Green and was moved to third via disqualification. He did not appear to be going as well late as the first three finishers. He’s now 1 for his last 13, with his previous tally in May of ’19.

#3 Marzo and #2 Aquaphobia are examples of Mike Maker claims that have done well in graded distance turf races under the new trainer’s care. The former set the pace in the Bowling Green and should do the same in here. He’s a Grade 3 stakes winner at the Sword Dancer distance. #2 Aquaphobia won the Grade 1 United Nations in fine style last out and gets Irad Ortiz in the saddle. He’s certainly going great at the moment but is 0-4 over the Spa green and 0-2 at the distance. The latter would be the only one of the two we would consider using.

Race 10—Maiden
It doesn’t take a genius to assume that discussion of a 2-year-old maiden race at Saratoga ought to begin with runners trainer by Todd Pletcher and Chad Brown. We’ll start with #2 Always Carina by Malibu Moon. She’s worked out at Saratoga every 6-8 days since July 10, with 3 three-eighths of a mile works, 2 half-miles, a five-eighths and another half-mile. The last in the series was from the gate in :47 1/5 and appears to have been in even company with Brown’s other starter in the race #5 Zainalarab. She also has worked steadily—every 6 or 7 days since July 15—including 2 half-mile gate drills, two five-eighths works and a bullet half and a bullet three-eighths. She seems the better of the two Browns that are ridden by Irad and Jose Ortiz, respectively. Difficult to ignore any Brown/Ortiz brother combination.

#3 Jouster hails from the Pletcher barn and has a shorter work tab than either Brown runner but has a :59 4/5 gate drill—a serious sign of intent. John Velazquez rides.

For ticket building purposes, we’ll go against the grain a bit and use fillies with acceptable previous racing experience and hope to connect on a price. #6 Peachy Queen has a race under her belt and that’s often a plus, especially when it’s a decent try—third, beaten less than four lengths—while running till the end. Trainer Danny Gargan is 30% with 20 maiden 2-year-old second time starters, according to ThoroGraph stats. An extra half furlong ought to be acceptable to her highness. Plus, with all the advertising Mattress Mac has done, you’ve got to root for Runhappy to sire a Spa winner for a $100k bonus.

#7 O’Gotten Girl has a turf start under her belt and it was a decent effort. Her trainer is 22% with runners going turf to dirt.

#8 Spun d’ Etat has been third in two previous six-furlong tries—one at Keeneland and one at the Spa. She’s not without a chance and draws a nice outside box for this. Hustling Luis Saez takes over in the saddle, so expect early fireworks.

#9 Rookery, a Pennsylvania bred, had a decent start for trainer Tom Amoss, as she closed for trainer Wayne Catalano to miss by a mere neck. Jockey Jose Lezcano moves from #8 Spun d’Etat to #9 Rookery for this and he’s 21% with Catalano.

Race 11—State-Bred Allowance
We conclude the Pick 4 sequence with a first-level, state-bred allowance race. There’s an interesting handicapping angle at play in here. #8 Miss Jimmy invades from Finger Lakes, a lesser New York track. Normally, she’d be a pretty quick toss. However, she’s won 6 races out of 11 starts and that’s 3 more than everyone else in the field (#1 Kinky Sox has 3 wins in 15 starts). Because those victories came in races with smaller purses they don’t count against #8 Miss Jimmy and she qualifies for this condition and she’s 15-1 on the morning line. Now, she may not be good enough at the Spa but her affinity for winning is something worth attention in a race where others seem allergic to it.

#7 Midnight Surprise has Pletcher/I. Ortiz power working for her off a solid state-bred maiden score as favorite. Back-to-back wins wouldn’t be out of the question.

#6 Flashpackinbarbie has good speed, 2 wins in 4 tries and experience at this level—a well-beaten second last out.

#5 Firenze Freedom, making her first start for Kelly Breen after switching from Jason Servis, broke her maiden against state-bred foes and then sandwiched a couple of stakes tries around a try at the optional $80k/n1x level. She wasn’t close in those races but wasn’t completely dusted either. She may go much better in here.

#3 Eloquent Speaker cuts back from a mile and one-eighth attempt last out where she stumbled at the start, recovered and then led into the stretch. That effort ought to have her legged up sufficiently for this. She’s got a win in 3 tries, a second and a third last out.

#4 Bustin Scones finished second at this level last out and also on June 13 at Belmont. Trouble with her is that she has just 1 win in 13 tries with 4 seconds.