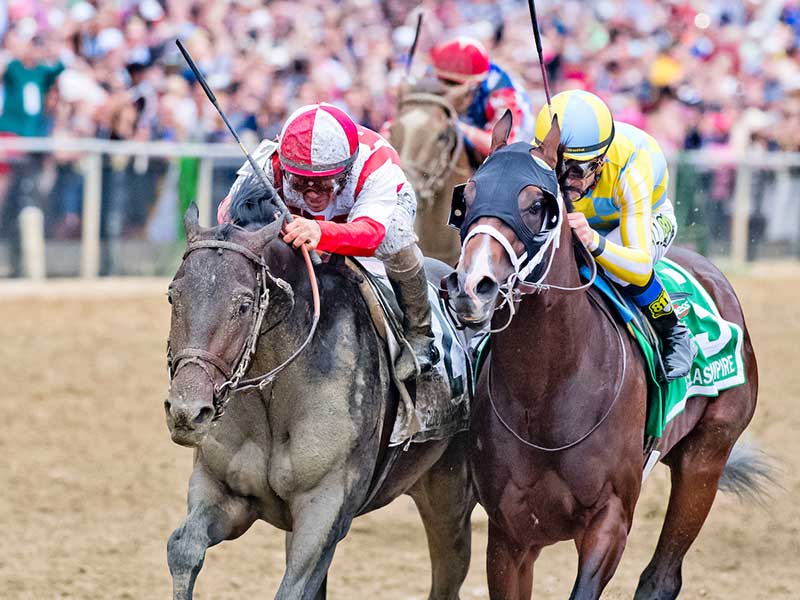 I think it’s fair to say most racing fans are always dreaming to see a Triple Crown sweep. It is a dream that has come true only 12 times, most recently in 2015 with American Pharoah.

But any chance for a 2017 Triple Crown sweep came to an end last Saturday in the 142nd running of the Preakness Stakes when Kentucky Derby winner Always Dreaming threw in the towel turning for home.

Always Dreaming was sent away as the 6-5 Preakness favorite. Many, including yours truly, were rather surprised his price was not lower. He had been made a 4-5 favorite on the morning line. I felt that morning-line price was spot on.

Ten 3-year-olds were loaded into the Pimlico starting gate to do battle at 1 3/16 miles. According to the official Equibase chart, Always Dreaming “brushed the outside of the gate and had his rider briefly adjust his right iron” at the start. Nevertheless, Always Dreaming actually went to the front at once.

Classic Empire, trained by Mark Casse, got away in good order as the 2-1 second choice in the betting. He took it to Always Dreaming right from the beginning.

Always Dreaming had a short lead through early fractions of :23.16, :46.81 and 1:11.00 on a track listed as fast. The track had started out as muddy for the races early in the card before being upgraded to good for the seventh, ninth and 11th races. The track condition was changed again, this time to fast, for the 13th race, the Preakness.

Going into the far turn, Always Dreaming and Classic Empire fought fiercely for the lead. Cloud Computing lurked in third while racing along the inner rail to save as much ground as possible. It was the exact trip Cloud Computing’s trainer, Chad Brown (the Eclipse Award-winning trainer of 2016), had hoped to see the Kentucky-bred Maclean’s Music colt get.

In upper stretch, while Always Dreaming was retreating toward the back of the pack, Classic Empire increased his advantage. With a furlong left to run, last year’s Eclipse Award-winning 2-year-old male had a healthy three-length lead. It looked like he was well on his way to a Preakness victory. But shortly after Classic Empire passed the eighth pole, Cloud Computing emerged to loom a serious threat.

In the final sixteenth, the race had boiled down to this question: Would there be just enough gas left in Classic Empire’s tank for him to stave off Cloud Computing? As it turned out, there was not.

Some think Leparoux lost the race because “he moved too soon” on Classic Empire. But in the rider’s defense, the Casse camp’s battle plan was to be aggressive from the get-go. The strategy was to put a “full court press” on Always Dreaming so he would not have it all his own way. Win or lose, Leparoux was instructed to be aggressive rather than patient in this race. And what happens? He gets criticized for not being patient and moving too soon.

After Always Dreaming began to drop back coming into the stretch, might it have been better if Leparoux had waited just a little bit longer before he pushed the gas pedal all the way to the floor? Maybe. But once they got into the stretch, Classic Empire had every opportunity to win if he was good enough. It was up to the more experienced, more seasoned Classic Empire to repulse a late challenge from the inexperienced, less seasoned Cloud Computing. And the bottom line is Classic Empire could not quite do it.

Classic Empire almost got knocked down in the initial strides of the Kentucky Derby, then raced quite wide into the stretch while on his way to finishing fourth. He traveled 75 feet farther than Always Dreaming, according to Trakus. In the Preakness, Classic Empire did not have trouble of any sort. Yet he still did not win.

“He ran his race, had a fair shot, just got beat,” Casse was quoted as saying the day after the Preakness in a Daily Racing Form story written by Jay Privman.

Casse added that he had no problem with Leparoux’s ride.

The Preakness was Always Dreaming’s first loss in five 2017 starts. He had won his previous four races this year by a combined 23 1/4 lengths. But in a dramatic form reversal, Always Dreaming lost the Preakness by 14 lengths. It was the first time he had been beaten when being trained by Todd Pletcher.

For whatever reason or reasons, the 2017 Kentucky Derby winner just did not seem to have his mojo last Saturday.

Was it because Always Dreaming had just two weeks between races? Running a horse back so soon clearly is something Pletcher is not especially comfortable doing. Indeed, if Always Dreaming had not won the Kentucky Derby, there is a 99.9% chance he would not have even started in the Preakness.

Did the Kentucky Derby take more out of Always Dreaming than it had seemed? It is a possibility, though he certainly had given no indication of that in the way he trained up to the Preakness.

A so-called new shooter, Cloud Computing became just the fourth horse in the last 34 years to win the Preakness without having started in the Kentucky Derby. The others were Red Bullet in 2000, Bernardini in 2006 and Rachel Alexandra in 2009. Castellano has ridden two of the four. Bernardini had been Castellano’s only Preakness win prior to this year.

Cloud Computing is the first horse Brown has ever saddled for the Preakness. It was the trainer’s first win in a Triple Crown race. No doubt there will be more such victories for Brown, a former assistant to the late Hall of Fame trainer Bobby Frankel. Brown paid a compliment to his former boss in a Racing Form story Monday written by David Grening. Brown said he followed a path to the Preakness with Cloud Computing that was inspired by Frankel.

“Sitting out, waiting is hard,” Brown said, alluding to the fact that Cloud Computing passed the Kentucky Derby. “[Frankel] was the master of patience and long-term planning. The master.”

I am sure the master would be extremely proud that his pupil won this year’s Preakness. I say that as someone who knew Frankel quite well.

The Preakness was Cloud Computing’s first stakes win. He races for Seth Klarman’s Klaravich Stables and William Lawrence. This was an especially sweet win for Klarman, who went to the races at Pimlico as a youngster when he lived close to the track.

It was “very gratifying” to win the Preakness for “all the hard work everyone puts in at the barn” and for “clients like Seth Klarman and Bill Lawrence, who are so loyal, so supportive and so patient,” Brown said. “To be able to reward them for their confidence in us is probably the most gratifying thing about the whole experience for me personally. They do trust us with a lot of horses, a lot of money invested in our stable and a lot of time spent dealing with good news and bad news. It’s great to be able to give back to them, especially Seth, who is from Baltimore.”

“Cloud Computing has the look of a horse that could be about ready to explode if he gets the right setup,” Jerardi wrote.

Also in the Xpressbet Preakness Wager Guide, Steve Byk saw Cloud Computing as a “value play.” Not only that, Byk was prescient as to how the race would play out.

“Cloud Computing could be a beneficiary of any heated duel on the front end and could be a $20 horse.”

Going into the Preakness, Cloud Computing was eligible to run in a race restricted to non-winners of two races lifetime. I did not like him last Saturday because he not only was trying to become a rare Preakness winner who had not run in the Kentucky Derby, he also had been soundly beaten in New York by a pair of horses who did not fare well in the Run for the Roses.

Cloud Computing finished second to J Boys Echo in the Gotham at Aqueduct on March 4, then ran third when Irish War Cry won the Wood Memorial at the Big A on April 8. Irish War Cry and J Boys Echo finished 10th and 15th, respectively, in the May 6 Kentucky Derby.

After Cloud Computing completed his 1 3/16-mile Preakness journey in 1:55.98, he was deemed to have run a career-best 102 Beyer Speed Figure. He had recorded Beyers of 96 in the Gotham and 90 in the Wood.

Always Dreaming? He followed his career-best 102 Beyer in the Kentucky Derby by plummeting to an 82 in the Preakness.

With Always Dreaming assigned a 102 Beyer Speed Figure for his Kentucky Derby win and Cloud Computing likewise recording a 102 for his Preakness victory, I think both probably are lucky that Mastery was not either of these races.

Mastery posted a 105 Beyer Speed Figure when he won the San Felipe by 6 3/4 lengths at Santa Anita Park on March 11 to remain undefeated in four career starts. At the end of the San Felipe, it appeared to me that Mastery was the best 3-year-old male in the country. Unfortunately, the son of Candy Ride emerged from the San Felipe with a “complete displaced condylar fracture” in his left front ankle, according to the New York Times’ Joe Drape, an injury that knocked the colt out of the Triple Crown races. Mastery required surgery for the insertion of three screws, Drape reported.

It is not hard for me to imagine a scenario in which Mastery won the Santa Anita Derby, Kentucky Derby and Preakness, then headed to the Belmont Stakes with a chance to become a second Triple Crown winner trained by Bob Baffert, who conditioned American Pharoah. But, of course, this is pure conjecture.

Here are the Beyer Speed Figures for the Preakness winners going back to 1991:

American Pharoah, ridden by Victor Espinoza, splashed his way to a seven-length Preakness victory on a wet track. American Pharoah was far from all out, with Espinoza feeling it would be prudent to save as much as possible for the colt’s next start, the Belmont Stakes, a demanding 1 1/2-mile race that had spoiled many a Triple Crown attempt.

As often noted in this column, when a horse wins a race and is far from all out, that is not taken into consideration in terms of calculating a Beyer Speed Figure. This is one reason why American Pharoah’s Preakness figure does not do him justice.

“We at Beyer Central explained at the time how much confidence we had in the Preakness Beyer -- not much,” Jerardi wrote. “The one-race monsoon made comparisons with the other races impossible, so it was a one-race variant, never how you want to make numbers. Randy Moss and I thought it could have been a 112. We had our reasons. Frankly, we will never know for sure.”

With two-thirds of this year’s Triple Crown now in the rearview mirror, Classic Empire tops the latest NTRA Top 3-Year-Old Poll. This poll will conclude following the June 10 Belmont Stakes.

Of the 15 first-place votes for Always Dreaming, one was mine. The way I see it, Always Dreaming currently deserves the top spot because his wins in the Florida Derby and Kentucky Derby trump Classic Empire’s victory in the Arkansas Derby and runner-up finish in the Preakness. Isn’t the Kentucky Derby the most important race in the 3-year-old male division?

Meanwhile, Arrogate once again received all of the first-place votes in the latest NTRA Top Thoroughbred Poll. This poll will conclude after the Breeders’
Cup on Nov. 3-4 at Del Mar.