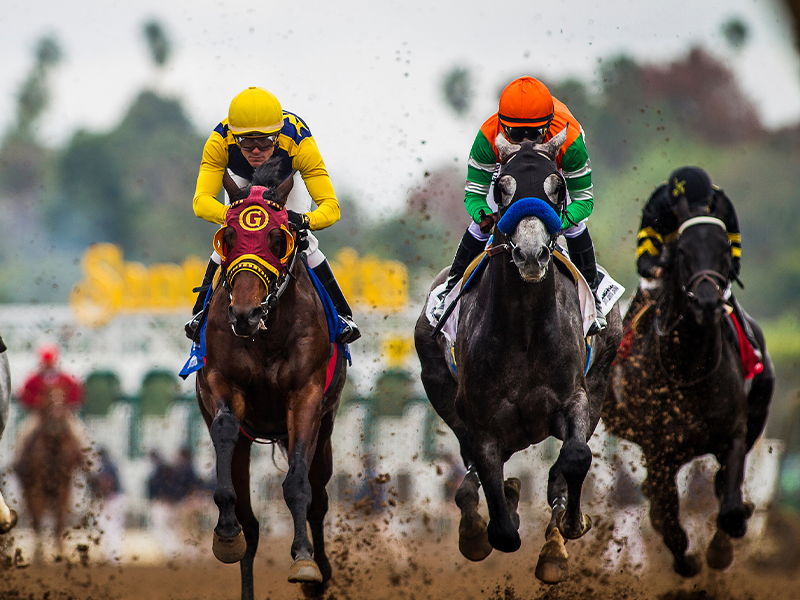 Forecast: We’ll triple the opener, a turf sprint for second-level allowance fillies and mares. Fantasy Heat is perfect (1-for-1) over the course and has the tactical speed to secure a good stalking position behind the likely controlling speed (Watch Me Burn). Second in a race in which five of the six entrants participated in at Del Mar in August, the M. Glatt-trained filly knows where the wire is (3 wins in 9 starts) and may be the most dependable in the field. Mischiffie was out of her element when unplaced in the Daisycutter S. in July but is back where she belongs today and is a two-time winner over this course and distance. The switch to F. Prat certainly won’t hurt and the Irish-bred filly is a versatile type that has shown the ability to win on the lead or from a second-flight position. Watch Me Burn always is suspect in the final furlong but she’s clearly the quickest in the field, and with the rails up and from an inside draw she’s likely to take this field a long way. Though both of her prior outings over the local lawn were lackluster, she may be worth tossing in as a saver or a back-up.

Forecast: Dehydration, claimed in her last pair and now in the J. Metz barn, shortens a half-furlong and makes her first start over the Santa Anita main track, which traditionally is a bit more kind to the speed types than Del Mar. The figure she earned two runs back when winning a restricted (nw-3) $20,000 claimer makes her a major player despite the class hike, and with the switch to A. Cedillo we’re expecting to see this sophomore daughter of Stay Thirsty on or near the lead throughout. Trouville, drawn directly outside Dehydration, was below form when facing older runners at Del Mar in a starter’s optional claimer, but this drop in class combined with the 3-year-old only restriction should get this daughter of Will Take Charge back on track. In the frame in all three of her prior starts over the Santa Anita main track, the L. Powell-trained filly makes a monumental jockey switch to F. Prat and should have dead aim from a second flight, stalking position. Both should be included in rolling exotic play.

Forecast: Top-to-bottom a chance in this $40,000 claiming turf sprint, so perhaps the best advice is to include as many as you can afford to. Smaller ticket players may try to survive and advance using the two we’ve listed above. Psycho Dar is a prior winner over the local lawn and catches considerably less early heat than he’s used to seeing, so we’re expecting the Storm Wolf gelding to be a strong threat from start to finish. He’s reunited with “win rider” E. Maldonado and could find himself on or near the lead through comfortable early fractions. Ultimate Bango has been stale in two 2020 outings, so this class drop into a seller for the first time is warranted. The B. Heap-trained gelding is back sprinting where he belongs, and as a three-time winner over this course and distance he’ll have every chance to return to winning form, assuming he’s not past his prime.

Forecast: Polar Wind has faced older horses in all five of his career starts but today faces 3-year-olds only while returning to the high-priced claiming ranks. He also adds blinkers for the first time, retains U. Rispoli, and won over this main track when breaking his maiden in sharp style last spring. The son of Super Saver should draft into a comfortable stalking position and then have his chance when the pressure is turned on. Signofthetimes was a much-the-best winner of a $16,000 claimer at Del Mar in mid-August and today is boosted way up in class in what we’ll take a sign of confidence. The son of Cross Traffic has numbers that make him competitive and has every right to continue his improving pattern in what will be just his fourth career start. These are the two we’ll be using in our rolling exotics with Polar Wind the logical top pick and one to beat.

Forecast: Let’s zero in on Eddie’s Sister in this state-bred maiden turf sprint for fillies and mares. The daughter of Square Eddie turns back from a route, lands the good rail (always the place to be on this course when the rails are up) and shows a couple of nice, easy training track drills to have her on edge. In a race with suspect early speed, the P. D’Amato-trained 3-year-old could be hard to catch if she leaves cleanly from her inside post, so let’s make her a win play and rolling exotic single.

Forecast: A respectable second in the Rancho Bernardo H.-G3 at Del Mar in her most recent outing, Amuse faces what appears to be an easier task in this year’s edition of the Chillingworth S.-G3 (formerly the L. A. Woman S.) for fillies and mares. A two-time winner over the Santa Anita main track, the daughter of Medaglia d’Oro lands the cozy outside post in a race that projects to have moderate early splits, so D. Van Dyke has the option of popping and going or stalking and pouncing. On pure speed figures she’s the one to beat. Qahira, in her first outing in almost a year, trounced a second-level allowance field in gate-to-wire fashion at Del Mar for her fourth win in six career starts. Both of her defeats have come over the Santa Anita main track, so there’s that to consider along with the very soft front-running trip in her most recent victory that might have flattered her just a bit. Yet, with rising speed figures and in a field without too much speed she could shake loose once again. We’ll include both in our rolling exotics and then have an extra ticket or two keying Amuse on top.

Forecast: We’ll go with the best speed and the best closer in this year’s renewal of the Eddie D. S-G2 over five and one-half furlongs on grass. Big Runnuer has really gotten good of late and may be fast enough to wire the field after winning the listed Siren Lure S. over this course and distance in June. Freshened since then and training in spectacular fashion for V. Garcia, the son of Stormy Atlantic has blistering early speed but can settle and pounce if required, so from his outside draw jockey J. J. Hernandez can access the race flow and choose his strategy. El Tigre Terrible offers danger from off the pace. Though shy in the speed figure department and tackling older horses for the first time, the P. Miller-trained gelding is a stakes winner over the local lawn and should have enough heat up front to compliment his style. The edge on top to Big Runnuer but we’ll include both on our rolling exotics.

Forecast: Fratelli is a first-off-the-claim play for P. Miller (35% with a massive flat-bet profit with this angle), so the raise in class from $16,000 to $32,00 isn’t an issue at all. The son of Munnings has numbers that fit in this restricted (nw-2) affair, picks up L. Saez, and sports the high-percentage blinkers off angle. A nice breeze at San Luis Rey Downs last week should have him primed for a career top performance. Nesbitt returned off a 14 month layoff to finish a respectable second in a (nw-2) $25,000 dash at Del Mar recently and if he moves forward at all he’ll be the one to fear most. The son of Curlin might have to be used early to gain position from his inside draw, so you should probably reference the earlier dirt races to see how the rail is playing and then adjust your analysis if necessary.

Forecast: Here’s a tough, competitive first-level allowance turf miler for fillies and mares. Kitty Boom Boom, a stakes-winner during her 3-year-old season and making her second start off a layoff, is likely the controlling speed, and with the rails up and a prior win over the course the R. Baltas-trained filly could take some catching if not respected. Gypsy Spirit, a beaten choice in her last pair and perhaps not one to trust, lands the good rail and should draft into an ideal second flight, ground-saving trip position and have every opportunity to seal the deal from the quarter pole home. She didn’t have a good trip in her last start – some of her issues were self-caused – but if she can switch off early and relax, she’ll be the most dangerous of the second-flight stalkers and be heard from in the final furlong.

Forecast: Scream and Shout shows up in a bottom-rung maiden claimer after finishing fifth in straight maiden state-bred company at Del Mar last month. She has numbers that beats this field but has backed up from the furlong pole to the wire in each of her three starts, so for protection we’ll also toss in Enriched by Deb, the possible pacesetter getting a significant break in the weights with the switch to bug boy A. Centeno. The daughter of Munnings continues to train fairly well for R. Baltas and may have a bit of improvement in her. In a race that should be treated cautiously, we’ll try to get by in rolling exotic play using just these two.