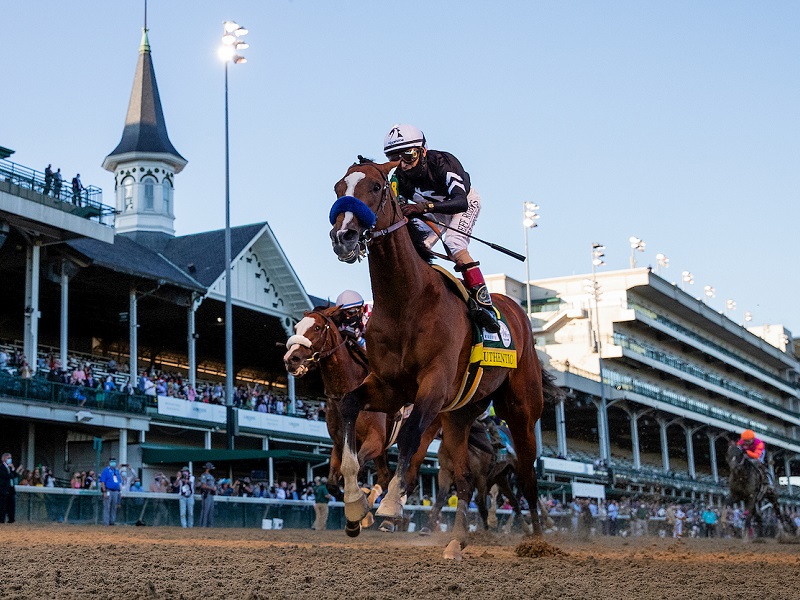 Trends or angles sometimes can grab one’s attention when it comes to sports in general or horse racing in particular.

How about this trend? Prior to last Saturday’s game between the Los Angeles Lakers and Denver Nuggetts, whenever the Lakers had the lead going into the fourth quarter in a playoff game, their win-loss record was 68-1.

The Lakers had the lead going into the fourth quarter last Saturday, but not by much. After three quarters, the Lakers led by just three points. The young, talented and scrappy Nuggets were, not surprisingly, giving the Lakers a battle. But the Lakers went on to win by a score of 117-110, propelling the great LeBron James and superstar Anthony Davis to the NBA Finals.

When the Lakers have had the lead entering the fourth quarter in a playoff game, they now have won that game 98.5% of the time going into the NBA Finals.

There is a trend in horse racing that has an even higher percentage of success. It’s a trend that so far has been successful 100% of the time!

I’m of the opinion that Authentic is going to make it six for six in terms of Baffert pulling off a Kentucky Derby-Preakness parlay.

These are my Preakness selections for Saturday’s 145th running of the $1 million Preakness at Pimlico Race Course (it’s the same Top 4 as on my Top 10 last week):

Pimlico oddsmaker Keith Feustle has installed Authentic as the 9-5 favorite on his Preakness morning line.

I do not relish saying this, but I have to call them as I see them. I think the 9-5 morning-line price is too high. I say this knowing full well that it is not easy to go lower than 9-5 on the favorite when the field is this big. That’s because the more Authentic’s price is lowered from 9-5, the higher the prices for some of the others in the field of 11 would need to be adjusted higher.

The Preakness morning line is listed below, followed by my odds:

Hall of Famer Baffert had not one, not two, but three strong Kentucky Derby candidates. They were, alphabetically, Authentic, Charlatan and Nadal.

On March 17, Churchill Downs announced it was moving the Kentucky Derby from its original date of May 2 to Sept. 5 because of the coronavirus pandemic.

Charlatan and Nadal finished first in their respective divisions of the Grade I Arkansas Derby on May 2, the original date of the Kentucky Derby.

It’s not outlandish to think Baffert might have won the Kentucky Derby with either Charlatan or Nadal if the race had been run on the first Saturday in May. (Personally, I think it would have been Nadal. But we will never know.)

On May 19, the New York Racing Association announced a change in the date and the distance for the Belmont Stakes stemming from the pandemic. The Belmont would be run on June 20 at 1 1/8 miles rather than on June 6 at its traditional 1 1/2-mile distance.

At that time, two of Baffert’s “Big Three” ranked No. 1 and No. 2 on my Belmont Stakes Top 10. Nadal was No. 1. Charlatan was No. 2. Authentic was not on the Top 10 because he was going to run in the June 6 Santa Anita Derby instead of the June 20 Belmont.

Unfortunately for Charlatan and Nadal, they both were unable to race again after the Arkansas Derby.

On May 28, it was announced that Nadal had emerged from a four-furlong workout in :48.80 at Santa Anita with a condylar fracture in his left foreleg. He was retired from racing.

After Nadal’s retirement, Charlatan ascended to the top spot on my Belmont Stakes Top 10. But then on the morning of June 6, it was announced that Charlatan not only would miss the June 20 Belmont, he also would not be running in the Sept. 5 Kentucky Derby due to an ankle injury.

With Charlatan sidelined, Tiz the Law took over the top spot on my Belmont Stakes Top 10. Tiz the Law won the Belmont by 3 3/4 lengths.

On the afternoon of June 6, Authentic finished second, 2 3/4 lengths behind Honor A.P., in the Santa Anita Derby.

In mid-June, the once-rosy picture for Baffert’s “Big Three” had deteriorated. Nadal’s racing career was over, Charlatan was on the shelf following ankle surgery, while Authentic no longer was undefeated.

A NEW “BIG THREE” FOR BAFFERT IN THE SUMMER

Following the setbacks to Nadal and Charlatan, the remarkable Baffert managed to come up with what some called another “Big Three,” this time consisting of, alphabetically, Authentic, Cezanne and Uncle Chuck, though this trio never seemed nearly as powerful as the triumvirate of Authentic, Charlatan and Nadal.

On July 2, Cezanne, a highly regarded $3.65 million auction purchase, was two for two after winning an allowance/optional claiming race.

On July 4, long-striding Uncle Chuck was two for two after the Grade III Los Alamitos Derby.

On July 18, Authentic won the Grade I Haskell Invitational at Monmouth Park.

But then Cezanne and Uncle Chuck fizzled.

On Aug. 8, Uncle Chuck -- thought by many to be Arrogate-like -- finished sixth, 11 lengths behind Tiz the Law, in the Grade I Travers Stakes at Saratoga.

Consequently, in mid-August, of Baffert’s new “Big Three,” only Authentic was headed to the Kentucky Derby, along with a rejuvenated Thousand Words.

But as it turned out, after all the twists and turns, ups and downs, all Baffert needed in order to win the Kentucky Derby was Authentic.

It was Baffert’s sixth Kentucky Derby victory, which tied Ben Jones’ longstanding record. Jones saddled his six winners from 1938 to 1952.

Authentic has recorded a couple of sharp workouts at Churchill Downs since his Kentucky Derby triumph.

Jockey Martin Garcia was aboard Authentic for Monday’s workout.

“He’s such an amazing horse,” Garcia said. “He worked awesome.”

Garcia noted that he has “worked a lot of nice horses” for Baffert in California through the years.

“This horse is just as special,” Garcia said. “He’s doing amazing for the Preakness.”

American Pharoah, who swept the Triple Crown in 2015, is one of those “nice horses” Garcia worked on numerous occasions for Baffert.

John Velazquez rode Authentic in the Kentucky Derby. Johnny V. again has the call for the Preakness.

Based on Auenthic’s workouts since the Kentucky Derby, it appears to be all systems go for the Preakness.

Additionally, I think Authentic will appreciate the shorter 1 3/16-mile distance of the Preakness vis-a-vis the 1 1/4 miles of the Kentucky Derby.

I am expecting Authentic to snag a second jewel in this year’s Triple Crown by capturing the Preakness.

In addition to Authentic, Baffert is running Thousand Words in the Preakness.

If either Authentic or Thousand Words wins this Saturday, Baffert will become the first trainer to win the Preakness eight times. Baffert and R. Wyndham Walden currently share the record of seven Preakness victories. Wyndham saddled seven Preakness winners from 1875 to 1888.

Justify, like American Pharoah, was a Triple Crown winner for Baffert.

On Sept. 19, Thousand Words worked five furlongs in 1:02.40 at Churchill Downs. “That clocking not only was nothing to write home about, the video of it is far from anything to rave about when viewed on HRTV,” I wrote in the Los Angeles Times’ horse racing newsletter.

“I thought he worked a lot better today with the blinkers,” Geroux said after last Saturday’s drill. “Last week was his first work over the track so he didn’t wear them but went very easy. It was a bit more of a serious work today.”

In the paddock prior to the Kentucky Derby, Thousand Words reared, lost his balance and fell on his side. He was automatically scratched as a precaution.

I see Art Collector as the main threat to Authentic. I also respect Swiss Skydiver. If one these three do not win, I will be shocked.

Art Collector, trained by Tommy Drury Jr., and Swiss Skydiver, conditioned by Ken McPeek, finished one-two in the Grade II Blue Grass Stakes at Keeneland on July 11. Art Collector prevailed by 3 1/2 lengths at odds of $2.30 to $1. Swiss Skydiver ran second as the slight favorite at $2.20 to $1.

After the Blue Grass, Art Collector won the Ellis Park Derby by 3 1/4 lengths. However, he was not entered in the Kentucky Derby after he nicked the bulb of his left front heel with a hind hoof while galloping at Churchill Downs five days before the race. According to Drury, the heel issue was nothing major, just bad timing.

Art Collector, like Authentic, appears to be coming up to the Preakness in fine fettle.

On Sept. 19 at Churchill Downs, Art Collector worked five furlongs in :59.40. The only faster clocking at the distance that morning was Authentic’s :59.20.

Daily Racing Form’s McGee quoted Drury as saying Art Collector is a “twelves kind of horse,” meaning a horse who often goes furlong after furlong in about 12 seconds. Drury said “it looks like that’s exactly what we got” in last Saturday’s five-furlong workout.

“Two horses in there look pretty formidable,” McGee quoted McPeek as saying in reference to Authentic and Art Collector. “Beyond that, we ought to be tough. The filly sure is doing good.”

The last filly to compete in the Preakness was Ria Antonia, who finished 10th in 2014.

Hall of Fame trainer Steve Asmussen is seeking his third Preakness victory after having won it with Curlin in 2007 and Rachel Alexandra in 2009.

I look at Pneumatic as a candidate to be part of the superfecta at a juicy price (20-1 on the morning line).

I thought Pneumatic ran well in defeat when he finished third behind Maxfield and Ny Traffic in the Grade III Matt Winn Stakes at Churchill Downs on May 23. Pneumatic vied for the lead from the beginning and weakened slightly late to lose by 1 3/4 lengths, a fine try inasmuch as he went into the Matt Winn with just two races under his belt.

Pneumatic then ran fourth in the June 20 Belmont. Again, I thought it was a good effort in the context that he was so lightly raced.

After the Belmont, Pneumatic won Monmouth’s 1 1/16-mile Pegasus Stakes by 2 1/2 lengths on Aug. 15. It was decided to have him skip the Kentucky Derby and take aim on the Preakness.

It appears to me that Pneumatic has upside. If I’m right and we have not seen the best from him yet, he might run his way into the superfecta Saturday.

MEMORIES OF A RACETRACK CONCERT

The first year I worked as a steward for the Washington Horse Racing Commission was at the 1979 fall meet at Yakima Meadows. The Central Washington Fair was held simultaneously at that same site during a portion of the race meet.

One evening after the conclusion of a 10-race card, Reddy gave a concert in front of the grandstand in conjunction with the fair. I simply remained in the stewards’ stand, which afforded me a wonderful view of the concert. As for my two fellow stewards, Russ Lawler and Joe Wittman, they had no such interest in staying for the concert. They both left after we posted the “official” sign for the final race.

Reddy put on a good show. It remains one of my fondest memories from that particular race meet 41 years ago.

In light of Improbable’s impressive 4 1/2-length victory at odds of 9-5 in last Saturday’s Grade I Awesome Again Stakes at Santa Anita, he has taken over the top spot in this week’s NTRA Top Thoroughbred Poll. He ranked No. 5 last week.

Bafferet trains Improbable. Maximum Security, also conditioned by Baffert, finished second in the Awesome Again as the 1-2 favorite. He slides down a notch to No. 2 in this week’s NTRA Top Thoroughbred Poll after being No. 1 for several weeks.

The Baffert-trained Authentic again is No. 1 in the NTRA Top Three-Year-Old Poll this week. I am thinking he probably needs to win the Preakness in order to hold onto the top spot next week.