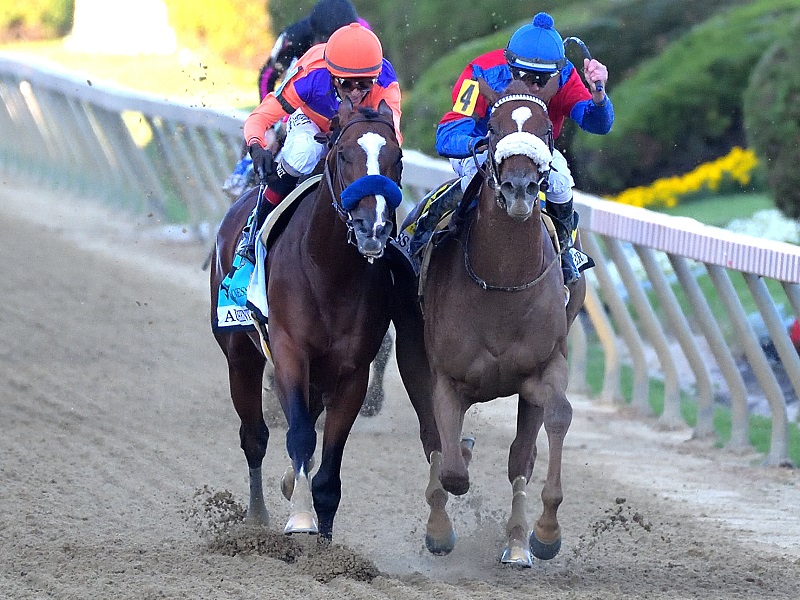 Each Monday, I’ll select my Most Valuable Pony from the previous week’s racing action around the country. Who won the week? It could be a breakout performer, a known stakes commodity or the horse lifting the most loot. Chime in on Twitter @Xpressbet with your thoughts on who should be each week’s MVP.September 28-October 4, 2020MVP: Swiss SkydiverOwner: Peter CallahanTrainer: Kenny McPeekJockey: Robby AlbaradoPerformance: Swiss Skydiver saved her best performance for her biggest stage on what has become the All Comers American Tour 2020. She became the second filly since 1924 to win the historic Preakness Oct. 3 at Pimlico, joining Rachel Alexandra (2009) on that short list. Perhaps more impressively, she joined Secretariat on the short list of fastest times ever in the 1-3/16 miles Preakness with a 1:53.28 performance that sits second only to that Triple Crown-winning legend. Swiss Skydiver was absolutely game in victory out-dueling Kentucky Derby champ Authentic in a stretch-long thriller. The pair put nearly 10 lengths on the rest of the field.On Tap: With nothing left to prove in the 3-year-old ranks, the natural next step will be to take on elder fillies and mares in the Nov. 7 Breeders’ Cup Distaff at Keeneland. There, past champion Monomoy Girl potentially awaits, along with a possible rematch with her Kentucky Oaks vanquisher Shedaresthedevil. Swiss Skydiver has put herself in the Horse of the Year conversation with victories this season at Gulfstream, Fair Grounds, Oaklawn, Santa Anita, Saratoga and Pimlico. A Distaff win, and depending on how the Classic shakes out, could reward her daring 2020 campaign with the top trophy among year-end honors.Honorable Mentions: At Santa Anita, Mo Forza continued his march toward the Breeders’ Cup Mile with a popular rally to capture the Grade 2 City of Hope Mile on Oct. 3. Simply Ravishing romped by nearly 7 lengths in the Oct. 2 Keeneland opening day Grade 2 Alcibiades Stakes, stamping herself a major contender in a strong Breeders’ Cup Juvenile Fillies division, foretelling a big weekend for Kenny McPeek. Essential Quality cruised to his second straight victory without defeat in winning Keeneland’s Oct. 3 Grade 1 Breeders’ Futurity and bounded into likely Breeders’ Cup Juvenile favoritism for trainer Brad Cox. His stablemate Factor This was equally impressive with a fast, front-end victory the same day at Pimlico in the Grade 2 Dinner Party on turf. Mutasaabeq let everyone know Oct. 4 in Keeneland’s Grade 3 Bourbon that turf may be his best surface, rocketing home to a victory that makes him America’s best threat in the BC Juvenile Turf ranks. Plum Ali was equally impressive in the 2-year-old filly turf ranks winning the always-key Miss Grillo at Belmont on Oct. 4. Trainer Chad Brown had a big weekend with milers, 1 on dirt and 1 on turf, with Complexity outrunning a strong field in the Grade 2 Kelso at Belmont on Oct. 3 and defending champion Uni running down stablemate Newspaperofrecord to repeat in the grassy Grade 1 First Lady the same day at Keeneland. And speaking of milers, Knicks Go set the Keeneland track record for a dirt mile on Oct. 4 with a sensational allowance performance over the same track in which he won the Grade 1 Breeders’ Futurity as a juvenile. He could work his way into the Breeders’ Cup Dirt Mile field as a major threat.