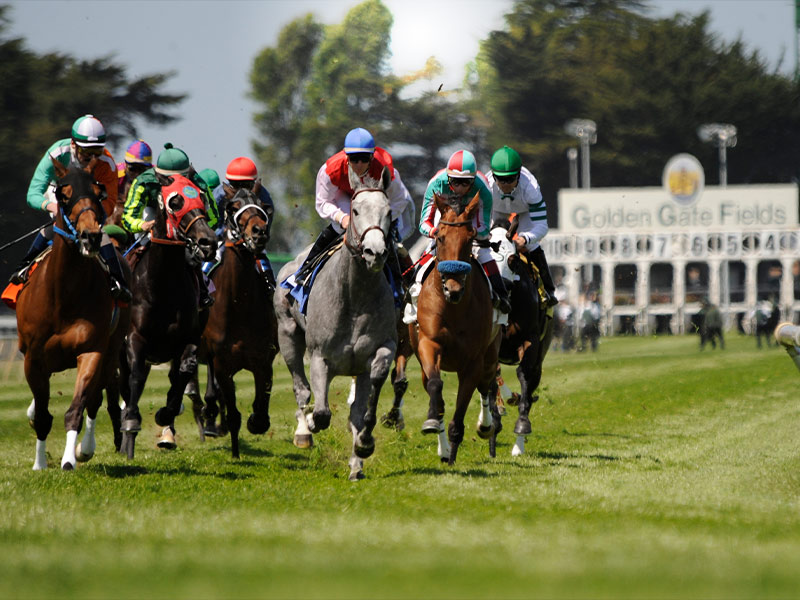 The Golden Hour Pick 4, which chains together the last two races on the Santa Anita and Golden Gate Fields programs, could be the vehicle to end the race week in a good (and winning) order.The wager has a $1 minimum (15-percent takeout) and includes, in order, Santa Anita’s eighth race, Golden Gate’s eighth, and Santa Anita’s ninth before concluding with Golden Gate’s finale.Sunday’s suggested ticket is $48 and includes a single: Colour Me Happy in Golden Gate’s eighth.Here’s a look at the play on Sunday’s card:Santa Anita Race 8 (7:30 p.m. ET, maiden claiming)DETECTIVE BERNARDO was third the only time he was in for a maiden tag, and he was closing mildly going 5.5 furlongs. Today he gets six furlongs and can get a ground-saving trip.FROM THE GET GO is set to make his career debut with a long list of works, including bullets at Santa Anita and Del Mar. He’s Kentucky-bred but is eligible because he’s California sired. Looks like a good spot for his first try.COZY BEAR improved to fourth in his second attempt and it looks like he’ll welcome the six furlongs after twice going 5.5 furlongs.WEDDING GROOM had different styles in his two races and he had the same results in each, finishing second. He came from off the pace at Los Alamitos and then set the pace at Del Mar. Experience and good form make him a player here.Golden Gate Fields Race 8 (7:45 p.m. ET, starter allowance)COLOUR ME HAPPY could be the make-or-break runner on this suggested ticket and comes out of one of the strangest races in recent memory. In his last race he inherited lead when the rider of the lone leader misjudged the finish line. Colour Me Happy took over and dug in for the win.He’s a single as he takes his four-race win streak into the 1 7-8-mile turf race. William Antongeorgi has been aboard the Blaine Wright trainee in his last three.Santa Anita Race 9 (8 p.m. ET, allowance optional claiming)CLAYTON DELANEY tried stakes company two races back after a maiden win. Comes out of a races that had fast fractions and he has a good shot to get on or very near the front end.FLY TO MARS has seen much better days in his career and continues his steady move down the class ladder. He was second in a pair of Grade 2 races in the Del Mar Mile and City of Hope Mile, back-to-back, in 2018, and had nearly two years off before a fifth-place finish in a starter allowance. He followed with a seventh last time. He goes against California-breds and could be at level at which can revisit good form.COALINGA ROAD was up in time at Del Mar and was second at Santa Anita in his first turf run. Should have a big presence on the front end today.BRIX is much improved since moving to the Richard Baltas barn three races back. He won his first two (after nine failed maiden attempts) for the new stable. Has finished well lately and the pacesetters could set the table for him.DREAMER’S REALITY ran poorly in is first two this year but he’d been off for nearly 2.5 years. This is his third start off the long layoff and most recently showed signs of life with a sharp five-furlong work.GOLDEN DOUGHNUT has competed in better races and should benefit from turning back in distance from two turns to 5.5 furlongs. He’ll have to reach his top stride early, but some of his longer races had fractions that were comparable to what you’d see in sprints.Golden Gate Fields Race 9 (8:15 p.m., ET, claiming)MY LUCKY MARK was claimed by the Jonathan Wong and ran third in a fast sprint. He stretches out to two turns and likely will be astrong force on the front end.KLONDIKE CREEK ran very well in two appearances over the Golden Gate Tapeta track, once with a runner-up finish in December and then for with a win in February. He can stalk the leader and could benefit from running against higher levels in his two races.
Here’s the suggested ticket for $1 Golden Hour Pick 4 on Sunday:
SA 8) #1 Detective Bernardo, #7 From the Get Go, #8 Cozy Bear, #9 Wedding Groom.
GG 8) #1 Colour Me Happy.
SA 9) #4 Clayton Delaney, #6 Fly to Mars, #7 Coalinga Road, #10 Brix, #11 Dreamer’s Reality, #12 Golden Doughnut.
GG 9) #2 My Lucky Mark, #5 Klondike Creek.
Total Ticket Cost) 1,7,8,9/1/4,6,7,10,11,12/2,5 = $48 for $1.00