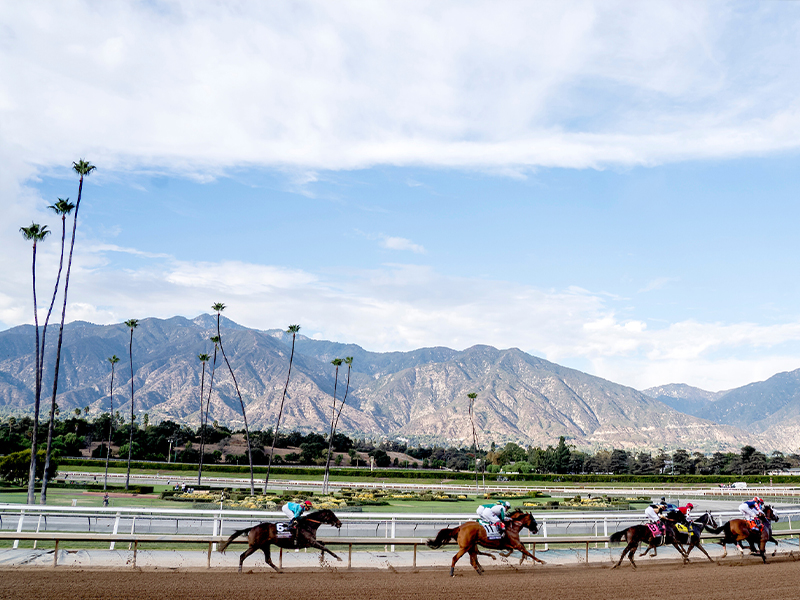 Forecast: Cassie Belle is an 11-race maiden and probably not one to trust, but if she repeats her last race in this modest state-bred turf sprint for fillies and mares she should be able to earn her diploma. After rallying widest and keeping to her task in the final furlong, the S. McCarthy-trained filly wound up second in a similar event over this course and distance last month and not much more will be needed to earn a diploma. In a race that projects to have soft early fractions, Elgofranco seems likely to be on or near the lead throughout. Despite always vulnerable under pressure in the final furlong, the daughter of Square Eddie should be able to stick around a long time against this group, and if she can shake loose early she could get brave late. Let’s try to survive and advance using these two in rolling exotic play.

Forecast: Little Miss Ellie, second in all three career outings to date, should finally break through with a win today in a modest five-runner maiden claiming extended sprint for older fillies and mares. She’s earned better-than-par speed figures for the level in her last pair and was more than three lengths clear of the rest in her most recent outing at Del Mar. With a healthy recent series of workouts and the switch to F. Prat, the daughter of Richard’s Kid should be able to justify her short price. For those wishing to protect in rolling exotic play, you can consider using on a ticket or two Capital Heat, a first-time blinkers on play getting a huge break in the weights with the switch to bug girl J. Pyfer. With a good break from the rail, she should be on or near the early lead and have a chance from there.

Forecast: The known element doesn’t really inspire in this state-bred maiden 2-yer-old turf sprint so let’s go with a fresh face on top. That Corey is bred win early and handle grass (Square Eddie), and the B. Cecil-trained colt has done some decent work in the a.m. to indicate he has at least some ability. He certainly won’t have to be a world beater to beat this bunch. Also worth considering is Lil Nas, a second-time starter from the P. Eurton barn (solid stats with this angle). The homebred colt flashed good speed for a half before faltering in his debut but should stick better today with the switch to grass. We’ll also take it as a positive that F. Prat rides him back. Both should be included in rolling exotic play; we’ll have a few extra tickets keying That Corey on top.

Forecast: Flying Business has much in her favor as the 9/5 morning line favorite in this $20,000 main track dash restricted to 3-year-old fillies. Drawn comfortably outside, adding blinkers, and switching to F. Prat, the daughter of Gervinho makes her first start since being claimed by M. Glatt (a powerful 25% with the first-off-the-claim angle) and should return to winning form at this six and one-half furlong distance that compliments her stalking style. A good, healthy recent work tab that includes a bullet three-furlong drill (:36 flat, fastest of 21) combined with the confident boost in class from the $12,500 level are other positive factors that make her rolling exotic single.

Forecast: Gypsy Spirit needs early cover and a patient ride and received the type of ride and trip that brought out her best in a first-level allowance score over this course and distance last month. In a race that projects to have a strong early pace, the English-bred filly may be capable of winning right back despite the obligatory raise in class. F. Prat knows her well, stays aboard, and should produce her at the quarter pole and have dead aim the length of the lane. Quick was in too tough in the Mabee S.-G2 at Del Mar last month but she’s back where she belongs today and is another that with patient handling could make some series noise when the pressure is turned on. She defeated Gypsy Spirt on the square when they met in July and is reunited with “win rider” U. Rispoli, who has quickly become J. Sadler bar’s “go-to” rider. She can be effective on the lead or from off the pace and has hit the board in all three starts over the local lawn.

Forecast: Secret Touch easily disposed of a $16,000 field at Del Mar in late August and today is triple-jumped in class by new trainer M. Glatt in what we’ll take as a strong sign of confidence (as stated in our fourth race analysis, this barn has superiors stats with the first-off-the-claim angle). The veteran gelding retains U. Rispoli and projects to enjoy a comfortable pace-stalking trip outside, just where he likes to be. Conquest Cobra, fresh from a fast, highly-rated win vs. $20,000 foes here last month, moves up two levels and gets a huge break in the weights with the switch to the 10 lb. bug rider J. Pyfer. A five-time winner over the Santa Anita main track, the son of Pioneerof the Nile always has been genuine and consistent. We’ll give Secret Touch a very slight edge on top but include both in our rolling exotics.

Forecast: Microrithms has won both of his starts since returning off a long layoff in extra game fashion and seems well-spotted to extend his overall winning streak to four in this second-level optional claiming sprint that came up a tad light in the early speed department. The projected pace flow should allow the B. Baffert-trained colt to secure his preferred “controlling speed” trip and justify what surely will be strong favoritism. Surfing Star may be worth some consideration. A closing third behind our top pick when they met in late August at Del Mar, the B. Headley-trained horse appeared sluggish and rusty during the early stages but finished with interest and seems certain to move forward off the effort. First or second in five of six career starts over the Santa Anita main track, the son of Surf Cat may still be a race away and find six furlong too sharp but is worth including on your ticket as a back-up or a saver.

Forecast: Let’s take a stand with the class-dropping Illapawnie in this restricted (nw-2) $20,000 claiming sprint. The B. Wright-trained filly is simply better than these on her best day, and even though she was well-beaten last time out when facing much strong first-level allowance foes, the daughter of Warrior’s Reward earned a “buried” number that actually puts her right in the hunt even without improvement. A repeat of her starter’s allowance score two runs back is more than good enough. Let’s make her a win play and rolling exotic single at or near her morning line of 3-1;

Forecast: Rockie Causeway is improving with racing and appears set to graduate in this mile turf affair for state-bred maiden fillies and mares. Her speed figures are gradually rising with each outing plus she’ll be adding blinkers and switching to U. Rispoli. A small concern is that she’s been a beaten favorite in her last pair (though running well in both) and the R. Baltas barn has been on a cold streak for a month, but the daughter of Giant’s Causeway still seems pretty solid against this group. Cheerful Charm retains F. Prat (who takes off ‘Causeway to ride her) and is improving in her own right, though not as fast on pure numbers as our top pick. This will be just her third career start, so the daughter of Boisterous should continue to progress. She should enjoy a good second flight, stalking trip and have every chance from the quarter pole home.

Forecast: Let’s try to get survive using just two in this $6,250 claiming turf miler for fillies and mares. Lady Brexit ships in from Indiana Downs while making her first start for the J. Wong barn (33% with this angle) so considerably improvement can be expected. The daughter of English Channel filly has good tactical speed and projects to enjoy a nice, trouble-free, stalking trip. Whoa Nessie looked quite good winning a recent $4,000 starter’s allowance affair in her first outing over the local lawn and while earning a speed figure good enough to make her capable of extending her winning streak to three. She can be tough on the lead or from a stalking position.