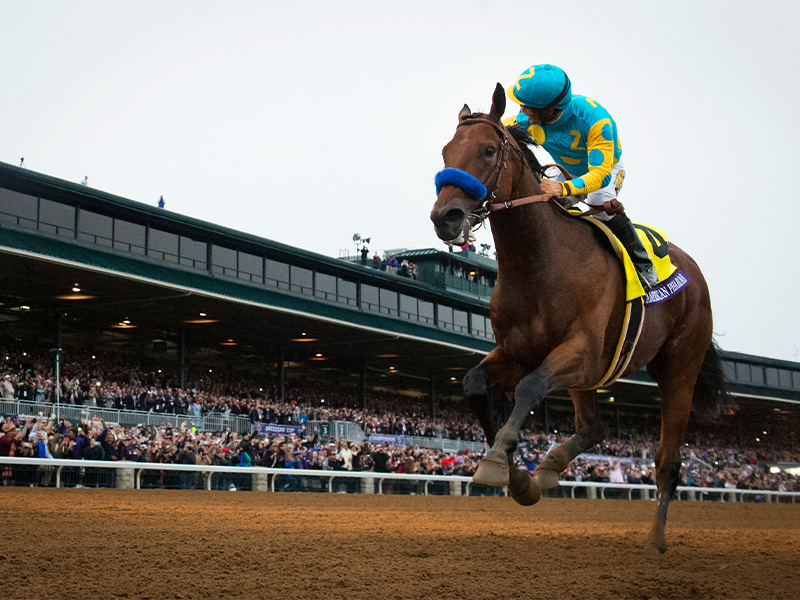 This year will be the 11th time that the Breeders’ Cup has been held in Kentucky.

In the lone BC Classic run at Keeneland prior to this year, 3-year-old superstar American Pharoah concluded his racing career in glorious fashion five years ago.

Earlier in 2015, American Pharoah had become the first 3-year-old to sweep the Triple Crown in 37 years.

When American Pharoah won the BC Classic, he was far from 43-1. He was backed down to 7-10 favoritism.

Owned and bred by Zayat Stables and trained by Hall of Famer Bob Baffert, American Pharoah swept the Kentucky Derby, Preakness Stakes and Belmont Stakes to become the first Triple Crown winner since Affirmed in 1978. Going into the 2015 Triple Crown, many questioned whether a horse would ever again achieve the coveted feat because of the exceedingly long drought. But American Pharoah proved it still could be done. And then Justify -- also trained by Baffert -- came along in 2018 to become the 13th Triple Crown winner.

After American Pharoah accomplished his Triple Crown sweep, the son of Pioneerof the Nile won the Grade I Haskell Invitational at Monmouth Park with ridiculous ease by 2 1/4 lengths on Aug 2. Keen Ice finished second.

Three weeks later, Keen Ice registered a 16-1 upset victory in the Grade I Travers at Saratoga. American Pharoah finished second to end an eight-race winning streak he had put together after finishing fifth at Del Mar in his career debut as a 2-year-old.

Not surprisingly, owner Ahmed Zayat was extremely disappointed that American Pharoah did not win the Travers. In the immediate aftermath of the loss, Zayat raised the possibility that he might retire the colt. But on Sept. 3, Zayat announced that American Pharoah would run in the BC Classic. This was music to the ears -- and a huge relief -- to Craig Fravel, who at the time was the president of the Breeders’ Cup, and all other Breeders’ Cup executives.

Reacting to Zayat’s announcement, Fravel took the unusual step of issuing a statement, which said in part: “While it is not our practice to comment on individual horses contemplating the Breeders’ Cup as a year-end target, we want to acknowledge the Zayat family on their decision to keep American Pharoah in training and look forward to his continued engagement with the fans who have so genuinely connected with the first Triple Crown winner in 37 years.”

If Zayat had decided to retire American Pharoah after his Travers defeat, it would have dealt a huge blow to the Breeders’ Cup.

“A 2015 Breeders’ Cup without the 2015 Triple Crown winner would be a lot like a car without wheels or a baseball game without a bat,” I wrote for Xpressbet.com after Zayat said American Pharoah would be competing in the BC Classic.

American Pharoah’s lack of pep in the morning became enough of a concern to Baffert that it actually became a possibility that he might not send the Triple Crown winner to the Breeders’ Cup. But then American Pharoah’s training improved dramatically. His next three workouts at Santa Anita were terrific: seven furlongs in 1:23.00 on Oct. 14, six furlongs in 1:10.80 on Oct. 20, then four furlongs in :46.60 on Oct. 26.

While American Pharoah did run in the 2015 BC Classic, it was unfortunate that two-time Eclipse Award winner and two-time Breeders’ Cup winner Beholder was unable to start in the race.

A sensational 8 1/4-length winner of the Grade I Pacific Classic during the 2015 Del Mar summer meeting when she annihilated male foes, Beholder was entered in the BC Classic. But after Beholder galloped at Keeneland two days before the BC Classic, it was announced she would be scratched following an endoscopic examination that revealed traces of blood in her trachea and irritation in her lungs.

Hall of Fame trainer Richard Mandella had been keeping a very close eye on Beholder after she had spiked a slight fever following her arrival in Kentucky from Southern California.

Even though Beholder missed the 2015 BC Classic, she remained in training for a 2016 campaign at the age of 6. Thank goodness she did race in 2016. In one of the most exciting Breeders’ Cup races ever run, Beholder won the 2016 BC Distaff at Santa Anita by a scant nose over 3-year-old star Songbird at the end of a furious stretch battle between those two.

The defection of Beholder from the 2015 BC Classic was viewed by many as being helpful to American Pharoah in that she would have been a candidate to pressure the Triple Crown winner in the early going. It also was beneficial to American Pharoah from a pace standpoint that Liam’s Map’s connections opted to run him in the BC Dirt Mile instead of the BC Classic.

In my Breeders’ Cup selections for Xpressbet.com, I noted that “a pace that might unfold favorably” for American Pharoah was one of the reasons I was picking him to win the BC Classic.

Not only did American Pharoah win his first and only start against older foes, he trounced a group that had won many of the biggest races in the world.

It also should be kept in mind that American Pharoah managed to come up with such a brilliant performance in the BC Classic after doing much traveling during the year.

“In 2015 alone,” Haskin wrote, “he competed at seven different racetracks and made an unprecedented 14 plane trips, logging 28,000 miles.”

American Pharoah was credited with an outstanding 120 Beyer Speed Figure for his BC Classic win. It was the highest Beyer since 2011.

Speaking of Beyer Speed Figures, how other-worldly was Secretariat’s performance when he won the 1973 Belmont Stakes by a mind-boggling 31 lengths in an American record 2:24 for 1 1/2 miles? It pre-dates the publication of Beyer Speed Figures in Daily Racing Form, but Andrew Beyer has written that he calculated that Secretariat’s figure for the Belmont would have been 139, by far the highest ever.

In Secretariat’s Belmont, the time he ran each quarter-mile in:

In both the Belmont and BC Classic, it was truly remarkable how American Pharoah clicked off similar quarters as if he were some sort of equine metronome.
Reeling off fractions so similar in races at 1 1/4 miles and 1 1/2 miles is something that you will rarely see.

BEST HORSES TO HAVE RUN IN THE BREEDERS’ CUP

There have been a total of 333 Breeders’ Cup races so far. Who are the best of the best to have participated in any of those races?

I have come up with my list of the best horses to have run in the Breeders’ Cup. This is how I see it. Undoubtedly your list would be different, quite possibly much different.

It turns out the only Triple Crown winner to ever run in a Breeders’ Cup race, American Pharoah, sits atop my list of the best horses to have participated in the Breeders’ Cup, as shown below (in parentheses is where the horse ranked on my list of the Top 100 Racehorses of the 20th and 21st Centuries to have raced in North America):

The horses ranked from No. 1 down to No. 14 on my current list of the Top 100 Racehorses of the 20th and 21st Centuries all did not race in the Breeders’ Cup. They are:

TRIPLE CROWN SWEEP IN JAPAN, NOT IN CANADA

Contrail won the Group I Kikuka Sho (Japanese St. Leger) by a neck at Kyoto Racecourse last Sunday to become that country’s eighth Triple Crown winner and first to do so while undefeated. He is now six for six. His sire, the deceased Deep Impact, swept the Japanese Triple Crown in 2005.

Deep Impact, a son of 1989 American Horse of the Year Sunday Silence, is the first Japanese Triple Crown winner to sire a horse who also swept those three races.

Meanwhile, one-eyed Mighty Heart was thwarted in his bid to sweep the Canadian Triple Crown when he finished seventh as the $1.15 to $1 favorite in last Saturday’s Breeders’ Stakes at Woodbine. Belichick (a Lemon Drop Kid colt, not the coach of the struggling New England Patriots) won the 1 1/2-mile grass event as a maiden.

Belichick was not your typical maiden, though, in that he was coming off a second in the prestigious Queen’s Plate, the first leg of that nation’s Triple Crown at 1 1/4 miles on synthetic footing at Woodbine.

Trainer Josie Carroll did achieve a personal Triple Crown sweep in Canada this year. She trains both Mighty Heart and Belichick.