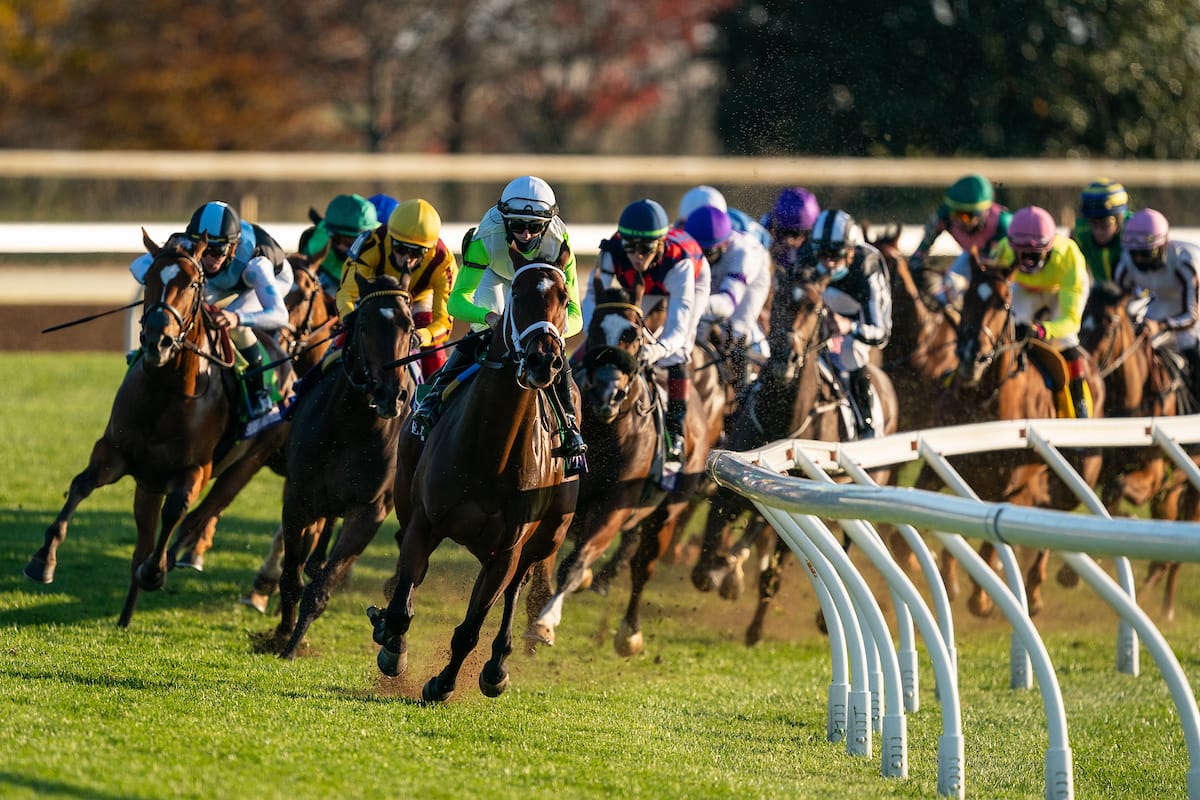 Nashville will be a single on many, many opening Pick 5 tickets on Breeders’ Cup Saturday at Keeneland – including this one.When you are enjoying your first cup of Joe, Nashville and six others will head to the gate in the Perryville Stakes. It’s a Breeders’ Cup undercard race, but Nashville could be close to joining some of the runners going in the late afternoon races. The first three races are non-Breeders’ Cup races, the fourth and fifth are the Fillies and Mare Sprint and the Turf Sprint.Nashville began his career with a bang September 2 at Saratoga. He caught a sloppy track, was never remotely challenged and won his debut by 11 lengths. The 6.5 furlong-event was accomplished in 1:14 2-5 after the Steve Asmussen charge cut out fractions of :21 2-5, :43 4-5 and 1:07 4-5 for the first three quarters. He lived up to his 1-5 odds and so impressive in came back as the 1-2 favorite in a non-winners of two allowance over the Keeneland strip. Again, there were so serious challenge and won the six furlongs race by 9 3-4 lengths in 1:09.The top offering of the first five races comes in the fourth, when Gamine, Seregenti Empress and Bell’s the One lead the fastest distaffers in the worlds in the Breeders’ Cup Filly and Mare Sprint. The opening sequence also has the Lafayette Stakes, Qatar Fort Springs Stakes and Breeders’ Cup Turf Sprint.Here’s the $67.50 suggested Pick 5 ticket to open the action:Race 1 (10:15 a.m. ET, Perryville Stakes)NASHVILLE looks like he’s going to stay perfect after three starts. If you’re queasy about putting it all on a single in the opening event of entire two-day festival, skip it and start with the Pick 4 beginning in the second.Race 2 (10:45 a.m. ET, Lafayette Stakes)ENGAGE came up empty in the Vosburgh but that was his first in 11 months. Was fourth in the Breeders’ Cup Sprint year and this spot is considering softer than that one. Expect a wake-up call in his second back.SLEEPY EYES TODD was fifth in the G1 Awesome Again against Improbable and Maximum Security and others. Has been mostly at two turns lately and should have plenty in the tank for this.STRIKE THAT was up in time at Keeneland last out and is good form is undeniable. It’s a class question for his today.EBBEN won three straight until fifth in Churchill’s Ack Ack. Recent starts set him up for a good seven furlongs.MIND CONTROL has some good graded performances to his credit an comes off a closing third at Monmouth. Has passed some of his class tests.Race 3 (11:20 a.m. ET, Qatar Fort Springs Stakes)WICKED WHISPER won the G3 Miss Preakness and has taken half of her six lifetime starts. Tired in the Juvenile Fillies after winning the G1 Frizette. Getting back to good form. Classy.MERNEITH ran six furlongs in 1:08 4-5 last out at Santa Anita and this American Pharoah filly cannot be overlooked. Improving for Bob Baffert.MOTIVATED SELLER perfect in two starts. Has been impressive in each for Chad Brown and her most recent score was off a nine-month layoff.Race 4 (12:02 p.m. ET, Breeders’ Cup Filly and Mare Sprint-G1)GAMINE’s talent is the farthest thing from a secret and her seven-length score in the G1 Test should’ve answered any question about her turning back to seven furlongs. We know how good she is.SERENGETI EMPRESS lost by nose last out after battling six furlongs in 1:08. Came within an inch or two of lasting the seven furlongs, which she had done.BELL’S THE ONE was up in time over SERENGETI EMPRESS with the big late run last out. Again, she’ll get the pace and she’s probably never been better. She’s the most obvious answer for lower-priced options.Race 5 (12:39 p.m. ET, Breeders’ Cup Turf Sprint-G1)BOMBARB lost photos in two of three races this year and looks like he’s getting stronger. Will be a good price and Richard Mandella is an expert at getting his horses ready for the top events.GOT STORMY is a familiar face and the gender of opponents just doesn’t matter. This tough girl has been a short-priced favorite on many occasions and she’ll bring her best.EXTRAVAGANT KID doesn’t lose much talent as he gets older. He was second in his last Grade 2 races and will be a major factor from the start of this one.My Ticket
Race 1) #1 Nashville.
Race 2) #1 Engage, #6 Sleepy Eyes Todd, #8 Strike That, #9 Ebben, #10 Mind Control.
Race 3) #4 Wicked Whisper, #7 Merneith, #10 Motivated Seller.
Race 4) #2 Gamine, #7 Serengeti Empress, #9 Bell’s the One.
Race 5) #10 Bombard, #12 Got Stormy, #14 Extravagant Kid.
Total Ticket Cost) 1/1,6,8,9,10/4,7,10/2,7,9/10,12,14 = $67.50 for $0.50