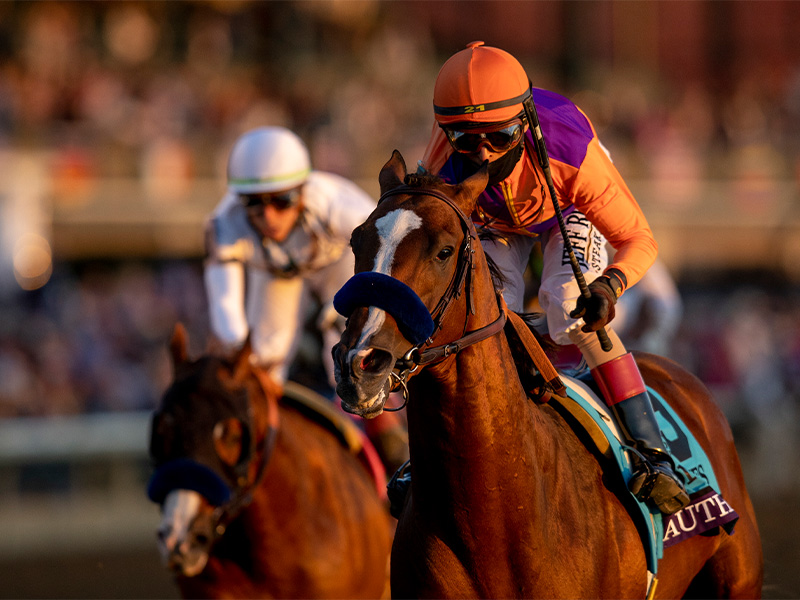 Each Monday, I’ll select my Most Valuable Pony from the previous week’s racing action around the country. Who won the week? It could be a breakout performer, a known stakes commodity or the horse lifting the most loot. Chime in on Twitter @Xpressbet with your thoughts on who should be each week’s MVP.October Nov. 2-8, 2020MVP: AuthenticOwner: Spendthrift Farm, MyRaceHorse Stable, Madaket Stables, Starlight RacingTrainer: Bob BaffertJockey: John VelazquezPerformance: Authentic’s wire-to-wire performance in the Nov. 7 Grade 1 Breeders’ Cup Classic never appeared in doubt. Only Ghostzapper (2004) and Skip Away (1997) ran faster in winning the 1-1/4 miles than Authentic’s 1:59.19. The sophomore became the 13th 3-year-old to win the $6 million centerpiece, and joined Sunday Silence (1989), Unbridled (1990) and American Pharoah (2015) as Kentucky Derby winners to follow suit the same season. It was trainer Baffert’s fourth Classic win in the past 7 years.On Tap: He’s off to retirement at Spendthrift Farm for study duty for the 2021 breeding season. If all goes as planned, you can expect to see his 2-year-olds hit the track in 2024. Authentic finished his career 8: 6-2-0 with nearly $6.2 million earned.Honorable Mentions: Breeders’ Cup Distaff heroine Monomoy Girl turned in a rousing performance that may have even topped her 2018 Distaff effort at age 3. She joined a sorority of 2-time winners that include greats like Beholder, Bayakoa and Royal Delta ... Gamine crushed Serengeti Empress in their anticipated BC Filly and Mare Sprint matchup, leaving it a lopsided affair by 6-1/4 widening lengths … Aunt Pearl was 1 of 4 championship victories for trainer Brad Cox, and overshadowed somewhat by Monomoy Girl’s historic Distaff. But this Juvenile Fillies Turf performer absolutely smoked them for the third straight race on the front end, still never trailing a horse in her career … Finally, hats off to fleet dashers Nashville and Whitmore, the former setting the 6-furlong track record in the Nov. 7 Perryville to open BC Saturday. He’s a freak. But Whitmore, age 7, deserves all the plaudits he can get after winning the Breeders’ Cup Sprint in his fourth attempt at the prize. He’s everything that’s good about following horse racing.