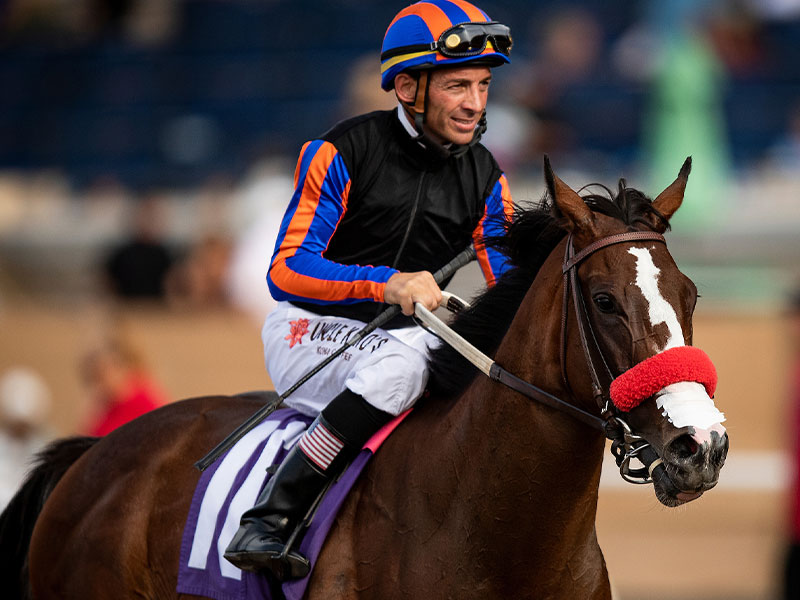 Jockey Aaron Gryder recently bid ‘adios’ to travelling around in circles on the backs of horses. He says ‘it’s time.’ His decision. Unlike other professional athletes, jockeys aren’t ‘released’ by a team. Unclaimed on waivers. Victims of expired contracts. No one in particular informs jockeys when it’s time to hang up tack. They’re independent contractors…kind of…hired out afternoons, like limos or bicycles. Ultimately, when fewer and fewer people are willing to enlist you for a ride around the city or the park, that’s when you know it’s time to call it quits. Gryder, thankfully, stops a bit short of that day.

The life of a jockey is challenging in so many ways. For example, how’d you’d like to have to stand on a scale every day before work and have your weight then announced to the world? Gryder is 5’ 6” and that’s on the tall side for a jockey. He learned more a lifestyle and less a diet to cope but still knew how to ‘pull’ a few pounds on race days by jogging uphill in a sweat suit or by doing yoga, boxing or Pilates, he told Channel Guide Magazine in 2009.

And then there’s the danger. Jockeys can’t think about that and perform well. But the threat’s still there, lingering in the air like the faint smell of burnt rubber. Gryder’s fortunate. 50-years-old and joints moving pretty well, thank you, because…and now that he’s retired it can be said out loud…he’s been lucky to avoid serious injury. No knock on wood required. Why push the envelope?

Gryder’s tale is interesting. Born in West Covina, Ca, he first attended the races at Santa Anita with grandparents when he was less than half a decade old and spent time on the monkey bars in the track’s infield playground. He remembers immediately being attracted to the sport. At 13, an age when some coddled kids are met by parents while disembarking school busses on cul de sacs, Gryder moved to live, work and learn at former jockey Rudy Campas’ farm.

Campas was a perfect teacher. An affable 26-year riding veteran, retired from the saddle just two years before the fortuitous meeting with the youngster one morning at Santa Anita, Campas had been a Southern California fan favorite. He was short, even for a jockey, and round, built like a bowling ball. One afternoon, toward the end of his journeyman career, Rudy had failed to win on an odds-on choice around the bullring at the Pomona Fair. During the stretch-long walk back to the jockey’s room in front of the grandstand and apron he was heckled mercilessly. Inside, he complained loudly in his signature nasal tone, “Why the hell are they yelling at me? They should boo the filly. She’s the one that didn’t try.”

From across the room, the mercurial and often fined perennial Pomona riding champ Paco Mena offered advice, “Hey, Rudy, do what I do. Give them the finger. It costs you money, but you feel better.”

Campas and farm life taught Gryder what he needed to know and more. He didn’t just learn to ride; he earned a degree in horsemanship. Up and at ‘em at 4 a.m., taking care of the horses, Gryder learned about equines from the ground up and those lessons were invaluable when finally paid to partner on their backs.

This writer was a member of the 1987 Santa Anita publicity staff when a young Aaron Gryder won, perhaps, the most memorable race of his career—a maiden event aboard a filly named Tom’s Sweetie. Never heard of her? No surprise. She didn’t do much other than to provide a young jockey with a Hallmark moment.

The morning before Tom’s Sweetie won at Santa Anita, Gryder’s father, who had been visiting SoCal to watch him ride, was about to drive back home to Sacramento. He noticed Aaron also leaving the house at the same time. He backed up his car, got out and spoke to his boy. “I love you, son. Go win a race for me tomorrow.”

That evening the 42-year-old father suffered a heart attack and died in a fatal car accident. Understandably, the teenage jockey was shattered by the loss of his loving dad but went to the track the next afternoon because a winning ride was the last thing his father had requested.

At that point this writer pretty much knew the kid would be a success. And he has been on and off the track. Here’s wishing he finds another foothold in this game/sport/business where he can share his experiences and his character. You have to admit, we can use the help.

Below is one man's opinion regarding Del Mar's Saturday Late Pick 4 sequence:

Five panels sprinting on the turf always is a challenging affair. This is a turf test in which nearly every starter has a poor turf record. One exception is #8 Caerulean.

Seems like there’s plenty of pace in this six and one-half furlong event, so we’ll look for something from off the pace.

Pretty wide-open finale to close out the Saturday Late Pick 4. Here are a few suggested ways to go but you might also want to add something we’ve missed.