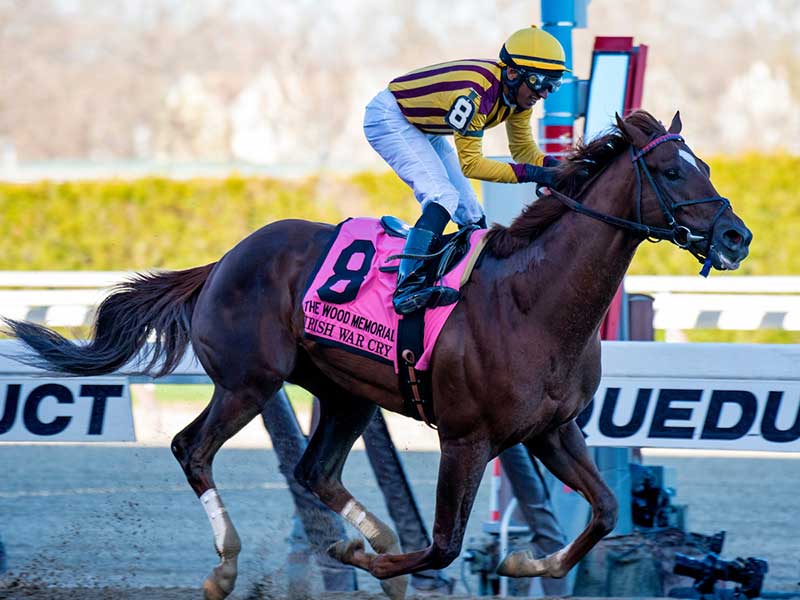 In a surprise today (Wednesday), probable favorite Classic Empire also was not entered. Last year’s Eclipse Award-winning 2-year-old male will miss the Belmont due to an abscess in the bulb of his right front foot, trainer Mark Casse reported.

This is the same foot that was found to have an abscess after Classic Empire finished a well-beaten third as the 1-2 favorite in the Feb. 4 Holy Bull Stakes at Gulfstream Park. The Pioneerof the Nile colt would go on to win the April 15 Arkansas Derby at Oaklawn Park. After the Arkansas Derby, Classic Empire ran fourth in the May 6 Kentucky Derby at Churchill Downs despite almost getting knocked down in the initial strides. He then finished second in the Preakness.

It has been a frustrating Triple Crown series thus far for yours truly this year. I did not like Always Dreaming in the Kentucky Derby, but he proved me wrong. Always Dreaming, off at 9-2, won that 1 1/4-mile classic by 2 3/4 lengths on a track that Equibase officially labeled as wet-fast. (I think it should have been called sloppy).

Thunder Snow was my top pick to win the roses. If he did not win, I thought it might well be Irish War Cry. Much to my chagrin, Thunder Snow decided the Kentucky Derby would be a good time to see if maybe he would rather be a bucking bronco than a racehorse. As for Irish War Cry, he loomed menacingly turning for home, with jockey Rajiv Maragh peeking back, making it appear the rider had a ton of horse under him. But Irish War Cry sputtered down the lane and finished 10th, 16 1/2 lengths behind Always Dreaming.

I had not been a believer in Always Dreaming going into the Kentucky Derby. But I did hop on his bandwagon for the 1 3/16-mile Preakness. He headed to Baltimore having won all four of his starts this year by a combined 23 1/4 lengths. I thought he probably would win the Preakness, then move on to the 1 1/2-mile Belmont with a shot at Triple Crown immortality.

But once again, Always Dreaming proved me wrong. He was a pace factor until turning for home, then called it a day, eventually ending up eighth as the 6-5 favorite. Lightly raced Cloud Computing, in only his fourth career start, won by a head in a 13-1 upset. Classic Empire, who hounded Always Dreaming early before putting that rival away coming into the stretch, appeared he might well be on his way to a Preakness victory when he had a three-length lead with a furlong to go. But Classic Empire could not quite stave off Cloud Computing’s late bid.

To be perfectly candid, this year’s Belmont lost much of its luster due to the absence of Always Dreaming, Cloud Computing and now Classic Empire. A dozen are entered in what shapes up as a wide-open affair.

Without further ado, here are my selections for the Belmont:

Here’s a horse-by-horse look at the Belmont field, in order of preference, with comments:

IRISH WAR CRY (7-2 morning-line favorite): I am going to approach the Belmont by asking this question: If everyone runs their best race, who would win? To me, it would be Irish War Cry.

I think the Irish War Cry who took the Holy Bull and the Wood Memorial at Aqueduct has an excellent chance to win the Belmont.

But there also is the Irish War Cry who lost the Fountain of Youth at Gulfstream by 21 3/4 lengths and the Kentucky Derby at Churchill Downs by 16 1/2 lengths. It is difficult to trust Irish War Cry to give a good account of himself this Saturday when he has two resounding 2017 defeats mixed in with his two 2017 victories.

When it comes to the Belmont, a key question always is whether or not a horse has sufficient stamina to succeed at the demanding 1 1/2-mile distance. It is encouraging in this regard that Irish War Cry is by Curlin.

Did Curlin win the Belmont? No, but he ran well enough in defeat to win many Belmonts.

In 2007, Curlin finished third in the Kentucky Derby and won the Preakness. Sent away as the even-money favorite in the Belmont, he finished second, a head behind the outstanding filly Rags to Riches.

EPICHARIS (4-1): After winning all four of his starts in his native Japan, he lost the UAE Derby by a scant nose to Thunder Snow. Yes, that’s the same Thunder Snow who tried bucking off jockey Christophe Soumillon in the Run for the Roses. But keep in mind that following Thunder Snow’s Kentucky Derby fiasco, he did redeem himself to some extent by finishing second to Euro star Churchill in a Group I race on the grass in Ireland on May 27.

Epicharis could have started in the Kentucky Derby, but his connections thought it would be better to skip that race and have a fresher Epicharis run in the Belmont. Passing the Kentucky Derby would give the colt more time between starts following his hard race in the UAE Derby.

In one of the biggest blunders in American breeding history, Sunday Silence was not kept in this country for stud duty and became an incredibly successful sire in Japan. One can only imagine how American bloodstock and racing no doubt would have been enhanced had Sunday Silence remained in the U.S.A.

Regarding Saturday’s 1 1/2-mile distance of the Belmont, it should be noted that Carnegie is the sire of Epicharis’ dam. Carnegie had the class and stamina to win the prestigious Prix de l’Arc de Triomphe at about 1 1/2 miles in 1994 and finish third behind Northern Spur in the Breeders’ Cup in 1995 before becoming a successful sire in a number of countries, most notably New Zealand. Carnegie’s dam, Detroit, won the Arc in 1980.

Just last year, Japan’s Lani finished third behind Creator and Destin in the Belmont. Lani lost by only 1 1/2 lengths.

LOOKIN AT LEE (5-1): Seventeenth early in the Kentucky Derby, he rallied to finish second at 33-1. Corey Lanerie’s ride was outstanding. Tenth early in the Preakness, Lookin At Lee finished fourth at 9-1.

Hall of Famer Steve Asmussen trains Lookin At Lee. Asmussen has said he feels the longer the race the better for this colt. That could be true, though I have found that most winners of the Belmont do not come from way back a la Lookin At Lee. Many times the Belmont winner is someone who possesses tactical speed.

Still, I can’t help but admire Lookin At Lee for the way that, race after race, he keeps coming on in the stretch. True, he goes into the Belmont having lost eight in a row since he won the Ellis Park Juvenile on Aug. 6 of last year. But since his triumph at “the Pea Patch,” he has finished worse than fourth only once, making him a superfecta candidate, as usual, in this Saturday’s Belmont.

Also to Lookin At Lee’s credit, he will be the only horse this year to run in all three of the Triple Crown events.

Ever since Gormley won the FrontRunner Stakes at Santa Anita last Oct. 1, he has been on a win-every-other-start pattern. If the pattern holds, he will win the Test of the Champion this year.

Gormley’s sire, Malibu Moon, is a son of 1992 Belmont winner A.P. Indy. A.P. Indy is a son of Seattle Slew, who won the 1977 Belmont to complete a Triple Crown sweep. A.P. Indy’s dam is a daughter of 1973 Triple Crown winner Secretariat, whose 31-length Belmont victory in a mind-boggling 2:24 flat is considered by most to be the greatest performance in the history of American racing. A.P. Indy is the sire of aforementioned 2007 Belmont winner Rags to Riches. It is a crime that Rags to Riches, one of only three fillies to ever win the Belmont, is not in the Hall of Fame. Even more absurd, Rags to Riches has yet to even appear on the ballot despite being eligible for the Hall of Fame since 2013.

TAPWRIT (6-1): I do think he is an interesting possibility to win. Fifteenth early in the Kentucky Derby after being shuffled back in the initial strides, Tapwrit finished sixth. However, his appeal to me this Saturday is diminished somewhat by the fact he seems to have become a “wise-guy horse,” a horse that is getting more buzz than is probably deserved. Wise-guy horses just do not win very often.

SENIOR INVESTMENT (12-1): He won the April 15 Lexington Stakes at Keeneland by a head over a highly regarded Bon Baffert trainee, West Coast. After the Lexington, Senior Investment finished third in the Preakness on May 20, while West Coast won an allowance/optional claiming contest at Santa Anita that same day. West Coast is the 5-2 morning-line favorite in Saturday’s Easy Goer Stakes on the Belmont Stakes undercard.

Can Senior Investment pull off an upset in the Belmont? His trainer, Ken McPeek, certainly knows how to win the race with a longshot. McPeek sent out 70-1 Sarava to win the 2002 Belmont. Sarava paid a record $142.50 for a $2 win ticket. I’m still mad at Sarava because I bet $100 to win and $100 to place on Medaglia d’Oro in that Belmont. Medaglia d’Oro, 18-1 in the wagering, finished second and paid $16 to place.

MEANTIME (15-1): This son of 2011 Preakness winner Shackleford probably will be a pace factor in this year’s Belmont. He won a 1 1/8-mile maiden race by 7 1/2 lengths on a muddy track April 22 at Keeneland, then ran second in the 1 1/8-mile Peter Pan at Belmont on May 13 when the track was sloppy. Meantime is not without a shot this Saturday, especially with Classic Empire now not in the race.

PATCH (12-1): He certainly has an attractive pedigree for the 1 1/2-mile Belmont. He’s a son of 2012 Belmont winner Union Rags. Patch’s dam, Windyindy, is a daughter of a Belmont winner in A.P. Indy.

Patch ran second in the Louisiana Derby, not considered one of this year’s strongest stakes races in the lead-up to the Kentucky Derby. He then had a patch of traffic trouble on the far turn, so to speak, and finished 14th.

The bottom line is the breeding certainly is there for Patch to do well this Saturday. I just question whether he is good enough to win.

Patch also had the misfortunate to draw post 12 for Saturday’s race, this after he had to start from post 20 in the Kentucky Derby. It’s a very tall order to try and win the Belmont with a wide trip. And post 12 greatly increases the possibility that Patch will be wide for much of his journey around the 1 1/2-mile oval.

When J Boys Echo won the Gotham Stakes by 3 1/2 lengths, he drilled the subsequent winners of the Preakness (Cloud Computing) and Wood Memorial (Irish War Cry). But J Boys Echo just has not done much other than his win in the Gotham.

TWISTED TOM (20-1): Chad Brown, the 2016 Eclipse Award recipient as outstanding trainer, will have run a different horse in each of the three Triple Crown events this year. Brown was represented in the Kentucky Derby by Practical Joke, who finished fifth at 27-1. Brown then saddled Cloud Computing to win the Preakness, who returned $28.80 for a $2 win wager. Now Brown is running Twisted Tom in the Belmont.

Twisted Tom is stepping up in class following back-to-back wins at Laurel in the Private Terms Stakes and Federico Tesio Stakes. It seems to me that he will have to run much better than he did in those races if he’s going to win this Saturday. On the plus side, though, at least Twisted Tom’s dam, Tiffany Twisted, is a daughter of 1995 Belmont winner Thunder Gulch.

MULTIPLIER (15-1): Frankly, I will be surprised if this son of The Factor will be much of a factor in the Belmont. Winner of the Xpressbet Illinois Derby, he most recently never threatened in the Preakness when he finished sixth at 19-1.