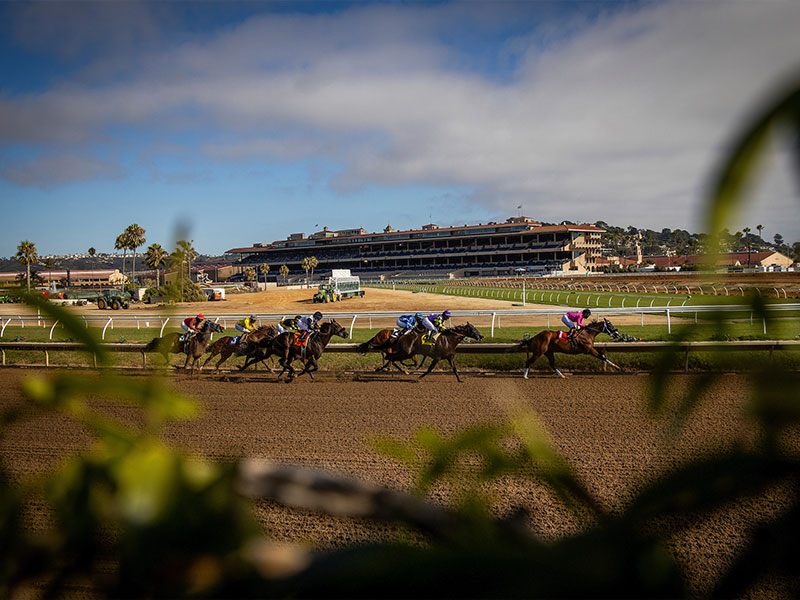 Del Mar’s season ends Sunday, which means it empties out it Pick Six pool. Yes, it’s a mandatory payout for the sequence that begins in the fourth race and ends with the Grade 1 Matriarch Stakes in the ninth.

If fortunate enough to be alive through five on this $72 suggested ticket, Sharing will be the one to get home in the Matriarch. She’s the only single on this ticket and could bring it all together, provided the earlier competitors hold up their end.

Sharing won the G1 Breeders’ Cup Juvenile Fillies Turf last year at Santa Anita and has been sharp in al three starts this year. It’s a strong field, but this Speightstown filly just doesn’t do anything wrong, and her trainer Graham Motion has had great fortune with turf distaffers.

Here’s a look at the sequence and horses used on the suggested ticket:

Race 5 (5 p.m. ET, optional claiming)
MAESTRO DEARTE has mostly finished with interest at a higher level. Can benefit from a solid pace.
JASIKAN was third in the G3 Wickerr here last year and drops to his lowest level since arrived from Ireland in 2018.
ANACONDA has only one start, but it was a dandy as he pulled clear against maidens. Bred to run a long way and Richard Mandella aims to continue his tremendous season, as he’s won 7 of 15 starts for 47 percent.
LIBERAL has the ability to make up ground and gets Hall of Famer Mike Smith aboard.
Race 6 (5:30 p.m. ET, claiming)
PEPE TONO has been against much tougher than this and ought to show some serious improvement on this class drop.
POLAR WIND was on the board in two of three against better and can move up with this step down the class ladder.Race 7 (6 p.m. ET, G3-Cecil B. DeMille Stakes)
EBEKO makes his follow-up start to a ninth-place finish in the G1 Breeders’ Cup Juvenile Turf and should be able to resume good form. He was second in the Del Mar Juvenile Turf Stakes in September. He has faced much better than he battles today.WOOTTON ASSET won his first two starts in France and is still looking for his first U.S. win in what will be his third start. He lost the Laurel Futurity (at Pimlico) by a nose and then was fourth in the Awad Stakes at Belmont. He has been involved in slow-developing races can get a much better pace setup here.Race 8 (6:30 p.m. ET, maidens)
BIG STRETCH was third two back and she returns to a sprint after a pair of two-turn turf appearances. Likely to be a late threat in her return to a shorter race.
OUR MISS MILLIE was mid-pack in her only start and it’s a good sign that Hall of Fame Mike Smith returns for Round Two. Gets a little more ground and has a good chance to make a good charge.
ANNIE GRAHAM gets Irad Ortiz, Jr. aboard for her first career start and recently had a good five-furlong work.Race 9 (7 p.m. ET, G3-Matriach Stakes)
SHARING returns to California, where here only start in the Golden State was a 1 1-4-length win in the G1 Breeders’ Cup Fillies Turf, where she pulled away on the course at Santa Anita. She returned to racing when she won the Tepin at Churchill Downs in May, was second in the G1 Coronation Stakes at Royal Ascot and won her return to the states when she cruised in the G2 Edgewood at Churchill. One of the world’s best turf fillies can keep up her winning ways and take her record to six wins from eight starts.Race 10 (7:25 p.m. ET, optional claiming)
RUTHIES RACER broke her maiden on her first try and has improved considerably in each. Should enjoy the six furlongs. Takes on the boys.NONE OF THE ABOVE was in stakes races in his last two and takes a step down in class. Serious late threat.SWIFT AS I AM was third at this level in his second stakes and has enough speed to get in good position from his post.My Ticket
Race 5) #1 Maestro Dearte, #2 Jasikan, #4 Anaconda, #11 Liberal.
Race 6) #4 Pepe Tono, #7 Polar Wind.
Race 7) #1 Ebeko, #11 Wootton Asset.
Race 8) #2 Big Stretch, #11 Our Miss Millie, #12 Annie Graham.
Race 9) #3 Sharing.
Race 10) #4 Ruthies Racer, #7 None Above the Law, #9 Swift as I Am.
Total Ticket Cost) 1,2,4,11/4,7/1,11/2,11,12/3/4,7,9 = ($72) for $0.50