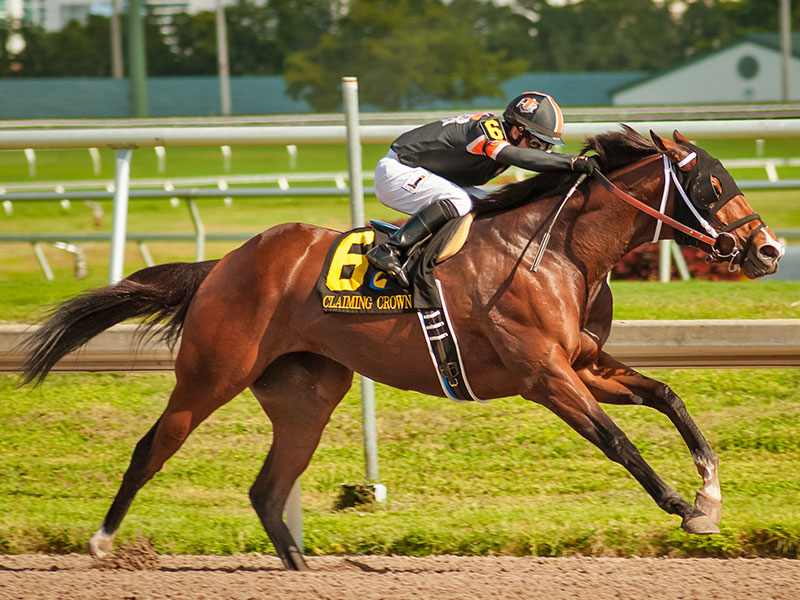 Forecast: Lots of question marks in the Friday opener, a maiden-claiming $35,000 affair over seven and one-half furlongs on grass for juvenile fillies. We’ll go four-deep in our rolling exotics and hope to get a decent price home. Trainer S. Joseph, Jr. has a pair of interesting first-timers, including Lullula, a modest $12,000 purchase at the OBS April Sale but who has displayed some ability in a.m., drills, most notably a bullet workout around dogs at Palm Meadows in late October (4f, :49b, fastest of 36). She’s certainly bred for grass (Flintshire x Shakespeare) and lands the barn’s go-to rider T. Gaffalione. We’ll put her on top hope to get close to her 4-1 morning line. Stable mate La Dame (10-1) is worth including as well. The daughter of Karakontie is another bred strictly for turf and has been given a solid foundation of drills with a steady, healthy pattern that dates back to mid-September. Katiesdreamgirl may be the best of those with experience. The Young Brian filly finished with interest to be distant second in a similar affair over the local lawn when last seen in late August and has a right to produce a forward move for a powerful jockey/trainer team (E. Jaramillo/R. Nicks) in her first outing in nearly four months. Tequa (8-1) might be worth tossing in as well at 8-1 on the morning line. She picks up I. Ortiz, Jr. while showing the always-dangerous maiden-to-maiden-claiming class drop while also having back numbers that fit in this league.

Forecast: Low-level maiden $12,500 claimers meet over a one-turn mile in an empty affair with not a whole lot to like. Old Main, a reasonable runner-up two-turning at GPW last time out, earned a career top number in the process and would figure to beat this field if he can duplicate that effort today.I Got a Secret was a distant third in his only outing in late October over a sloppy main track in an off-the-turf affair and seems certain to improve against this bunch, though the big class drop off just one start indicates he’s not very well-liked. You have to use him, but at 8/5 on the morning line there’s little value to be found.

Forecast: Crack Shot ships down from Belmont Park to join the E. Dobles barn and has form in New York that should be more than good enough to beat this restricted (nw-2) $25,000 claiming field. We suspect he’ll be quick enough to outrun the speed types, and in a field with suspect closers the son of Freud should be able to hold sway under I. Ortiz, Jr. That said, this will be his first start in nine weeks and he only shows one breeze in the interim, so at 2-1 on the morning line and likely to go lower he can be considered a somewhat shaky rolling exotic single candidate. Tread lightly here.

Forecast: Twilight Galaxy is listed at 7/5 on the morning line but almost certainly will go odds-on in this restricted (nw-2) claiming $6,250 sprint for older fillies and mares. Runner-up at this level two-turning at GPW last month while almost five clear of the rest, the daughter of Flatter returns to a one-turn affair while adding blinkers, retains E. Zayas, and shows an easy breeze at Palm Meadows (5f, 1:02h) earlier this month to tick her over. She’s a logical no-value, rolling exotic single.

Forecast: Let’s go for a big price in this $35,000 claiming sprint for 2-year-olds. Heavenly Blessing is listed at 15-1 on the morning line but we suspect he’s better than that. After cutting out the fraction in a two-turner at GPW, the son of Young Brian turns back in trip and represents inside speed in a race lacking in effective closers. Carson City Kid (2-1) is the likely choice and one to beat based on speed figures and the first-time-for-a-tag angle. This will mark his turf debut, and while he doesn’t have a grass pedigree he should enjoy the abbreviated trip. Exchange Day got loose on lead and outran a slightly softer group at GPW, drawing away late despite not changing leads. The E. Plesa, Jr.,-trained colt stalked and pounced his way to a debut win last spring, and with speed drawn inside similar tactics should be employed today.

Forecast: Tony’s Rose handled a softer field at GPW sprinting on grass last month and may be capable of repeating on the raise in this restricted (nw-3) $25,000 affair for fillies and mares. The daughter of Tonalist likes to settle early and accelerate late, and with some help up front could once again produce the last run. Fightress, a prior winner over this course and distance, returns to the claiming ranks, is a solid fit on speed figures, and warrants a good look despite low profile connections and the short 14-day turnaround. These are the two we’ll be using in our rolling exotics but if you feel the need to spread deeper, go right ahead.

Forecast: Well Done West was a respectable third at Keeneland in his debut vs. maiden $50,000 foes in October and was haltered by D. Gargan, whose stats with the first-off-the-claim angle (48% with a massive ROI) is ungodly. Protected in straight maiden company in a sign of confidence, the son of Awesome Again gets a couple of extra furlongs to work with today and seems sure to produce a significant forward move for his new connections. At 7/2 on the morning line he’s a strong play; let’s just hope he can negotiate a good trip from the rail. Or’effice launches a comeback for a new trainer (Shug) and while he’s probably not cranked up for a barn that has weak stats with layoff runners this son of Medaglia d’Oro still has a chance to be a decent type after flashing considerable promise last winter and spring. This one-turn mile might just be a tad sharp (we suspect he’ll be much effective at longer distances) and the work tab appears light, but we’ll toss him in on a ticket or two as a back-up or a saver ”just in case.”

Forecast: Chao has plenty going for him in this turf miler for 2-year-olds. The son of Noble Mission ran quite well in both of his starts to date, most recently when graduating at GPW with a solid speed figure from a next-out winner while producing a determined late kick. Claimed out of that race by S. Joseph, Jr., (a sensational 35% with a flat-bet profit with this maneuver), he picks up I. Ortiz, Jr. and should see a fast enough early pace to compliment his late-running style. Honorable graduated with authority last month at GPW on turf at this one mile trip, doing so with a good stalking trip and a career top speed figure though failing to change leads through the lane. Protected today in this starter optional claimer, the son of Constitution retains E. Zayas is the likely choice and one to beat. Both should be included in rolling exotic play.

Forecast: We’ll triple this second-level turf miler for fillies mares but with a low degree of confidence in a race may prove chaotic. Stone Tornado has done nothing but burn money since arriving from Europe – she’s been a beaten choice in all four of her U.S. outings – but the English-bred filly is sure to get plenty of play again based on recent speed figures and top flight connections. A listed stakes winner in France last year, she needs to be held up early and produced late. California shipper Don’t Blame Judy joins the E. Kenneally barn and is another with highly-competitive speed figures, though she’s just 2-for-27 with 11 seconds and thirds and always has had difficulty sealing the deal under pressure. Bienville Street adds blinkers and picks up P. Lopez, so the daughter of Street Boss may perk up a bit after hitting the board in her last three starts, most recently when third in the Claiming Crown Tiara. She’s winless in nine starts this year and is just 3-for-30 during her career, although all three of those wins were accomplished over the Gulfstream Park grass course.

Forecast: The two major players in this restricted (nw-2) $12,500 sprint for fillies and mares are drawn side-by-side inside, with the edge on top going to Bird Map despite the highly-suspicious huge class drop off a layoff. The F. Calabrese/S. Joseph, Jr. combo usually is aggressive with claimers, so if this daughter of Liam’s Map has at least one good one left – and the work tab looks steady and healthy – she should be hard to beat. Gitana returns to her preferred surface (dirt) and certainly will try gate-to-wire tactics from her inside draw. She’s improved considerably since joining the G. Baxter barn (most runners do), so if she can shake loose early she’s likely to take the field a long way.