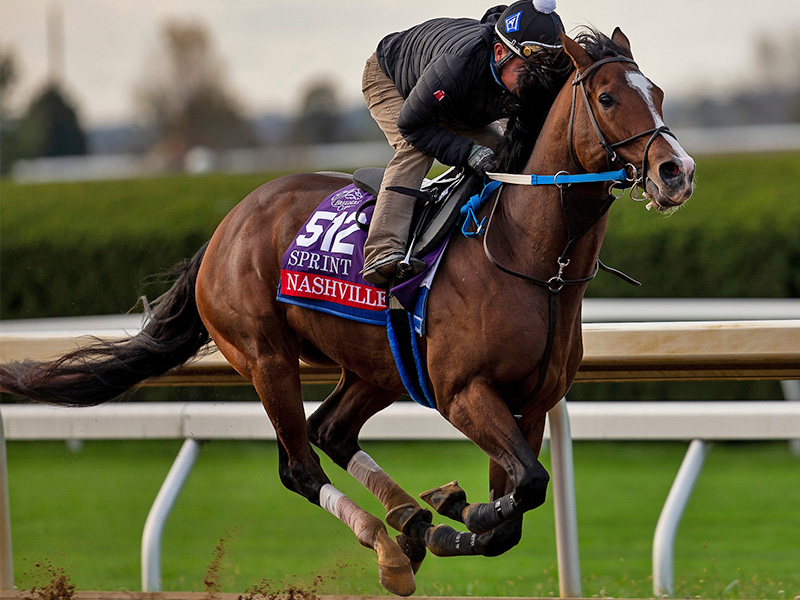 Six stakes races will be contested Saturday. There are three Grade I events, two Grade II races, one Grade III affair, one ungraded stakes race and a partridge in a pear tree.

Dec. 26 is the traditional date for Santa Anita to open. But last year’s opening day was delayed until Dec. 28 due to anticipated inclement weather.

This year’s seven-furlong Malibu has drawn an especially strong group of six 3-year-olds. It is headed by a pair of talented runners in Nashville and Charlatan. These two thus far have crossed the finish line in front each time they have raced.

When Nashville was last seen under silks, he sported a five-length lead at the eighth pole and went on to win Keeneland’s Perryville Stakes by 3 1/2 lengths on the Breeders’ Cup undercard. Even though the Kentucky-bred Speightstown colt was geared down late, he completed six furlongs on a lightning-fast main track in 1:07.89 to break the track record.

The Malibu will be Nashville’s first start in a graded stakes event. This also will be the farthest he has ever raced.

Charlatan, trained by Hall of Famer Bob Baffert, has finished first by 5 3/4, 10 1/4 and six lengths in his three career starts. The six-length margin came when he made his stakes debut in a division of the Grade I Arkansas Derby at Oaklawn Park last May 2, but his share of that purse eventually was taken away from him due to a medication violation. His Beyer Speed Figures have been 105, 106 and 96.

The Malibu will be Charlatan’s first start since the Arkansas Derby.

Independence Hall attracted attention when he won Aqueduct’s Grade III Nashua Stakes by 12 1/4 lengths at Aqueduct in his final start as a 2-year-old. He won the Jerome Stakes at the Big A in his first start at 3 on New Year’s Day, then lost his next two races.

Collusion Illusion, trained by Mark Glatt, is back in a race restricted to 3-year-olds after finishing 12th in the Grade I BC Sprint at Keeneland on Nov. 7. The Florida-bred Twirling Candy colt defeated his elders when he won Del Mar’s Grade I Bing Crosby Stakes on Aug. 1.

The last time Collusion Illusion ran in a race for 3-year-olds only, he won the Grade III Lazaro Barrera Stakes by 3 1/4 lengths at Santa Anita on June 20.

This will be Thousand Words’ first start since he ran eighth in the Grade I Preakness Stakes at Pimlico Race Course on Oct. 3. The Florida-bred Pioneerof the Nile colt, a $1 million yearling, won the Shared Belief Stakes on Aug. 1 at Del Mar when the runner-up was Grade I Santa Anita Derby winner Honor A.P.

Express Train switches back to dirt after finishing eighth in the Grade II Twilight Derby on the turf Oct. 18 at Santa Anita. Trained by John Shirreffs, the Kentucky-bred Union Rags colt has recorded a number of sharp workouts on the dirt since the Twilight Derby.

After finishing fifth in this year’s Grade I Florida Derby on March 28, Independence Hall underwent a trainer change from Michael Trombetta to Michael McCarthy. In Independence Hall’s first start for McCarthy, the Kentucky-bred Constitution colt came from off the pace to win an allowance/optional claiming sprint by 1 1/2 lengths on Nov. 8 at Del Mar.

Below are my selections for all six stakes races on Santa Anita’s opening-day card:

Spielberg resolutely kept to his task coming down the long stretch and just barely got up in the nick of time to eke out a nose victory in last Saturday’s Grade II Los Alamitos Futurity at odds of 9-5.

This was Spielberg’s first stakes win. He had finished second in the Grade I Del Mar Futurity and third in Santa Anita’s Grade I American Phaorah Stakes.

The Great One, a maiden, finished second in the field of six. Petruchio came in third.

This was what you all a tough beat for The Great One. Dismissed by bettors at 33-1, he led for every step of the 1 1/16-mile contest until getting nailed right on the finish line.

Spielberg and The Great One each were credited with an 81 Beyer Speed Figure.

This was by far The Great One’s best performance yet. His top Beyer Speed Figure prior to the Los Alamitos Futurity had been a 68. The Great One had run only a 62 Beyer when he finished fourth, 13 lengths behind Spielberg, in a one-mile maiden race at Del Mar on Nov. 1.

The Great One “was tough to get by,” Baffert said of Spielberg after his first stakes win last Saturday. “We needed every bit of that stretch and we were fortunate to get there.”

Red Flag, sent away as the 4-5 favorite, was a big disappointment while racing around two turns for the first time. He ended up fourth, 8 1/2 lengths behind Spielberg and The Great One. Red Flag went into the Los Al Futurity off a 7 1/4-length victory in Del Mar’s Grade II Bob Hope Stakes in a 10-1 upset on Nov. 15. Spielberg finished fourth as the 3-5 favorite in the seven-furlong Bob Hope, 9 1/2 lengths behind Red Flag.

Baffert has attributed Spielberg’s lackluster Bob Hope effort to coming back too quickly, just two weeks after a hard-fought nose win in a one-mile maiden race at Del Mar. According to Baffert, Spielberg also “didn’t ship well” to Del Mar for the Bob Hope.

Looking ahead, Santa Anita’s Grade III Robert B. Lewis Stakes at 1 1/16 miles on Jan. 30 will likely be next for Spielberg, whose sire won the Grade I Belmont Stakes in 2012.

Meanwhile, Baffert told me Sunday that Santa Anita’s Grade III Sham Stakes at one mile Jan. 2 is “probable” for Life Is Good, a scintillating 9 1/2-length winner at first asking Nov. 22 in a 6 1/2-furlong maiden race at Del Mar.

American Pharoah and Justify were Triple Crown winners for Baffert. Authentic is expected to be voted 2020 Horse of the Year after winning this year’s Grade I Kentucky Derby and Grade I Breeders’ Cup Classic.

While it is remarkable that Baffert has won the Los Alamitos Futurity/Hollywood Futurity 13 times, there is another Grade I race he’s won even more times.

Baffert has won the Grade I Del Mar Futurity a total of 14 times, including a run of seven straight years like the Los Alamitos Futurity. Baffert’s Del Mar Futurity winners are listed below:

Baffert this year also registered his ninth win in Monmouth Park’s Grade I Haskell Inviational. His nine Haskell winners are listed below:

Baffert and Hall of Famers Charlie Whittingham and D. Wayne Lukas are the only trainers to have won any of the current Grade I races nine times or more.

+Placed first through the disqualification of Approved to Fly

Lukas’ nine wins in Santa Anita’s Grade I Chandelier Stakes (formerly the Grade I Oak Leaf Stakes) are listed below: