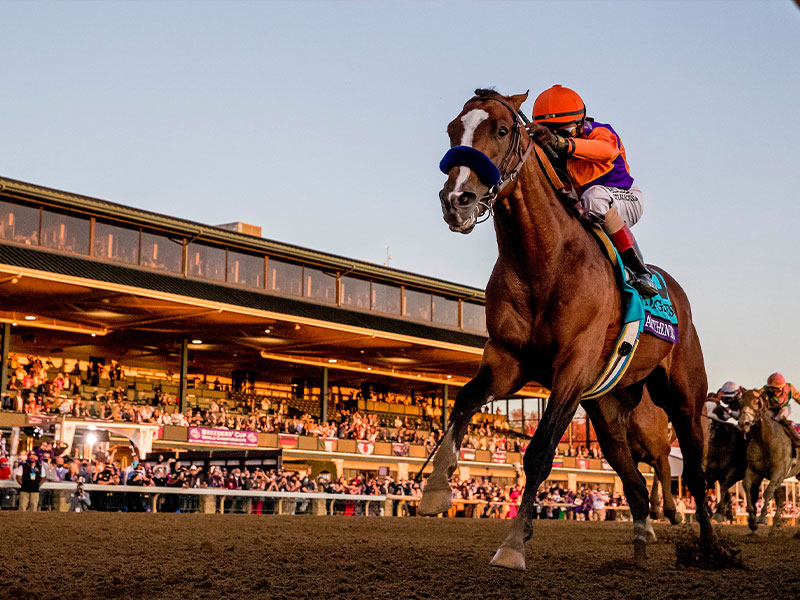 I first had the honor of voting for Eclipse Awards in 1976. My choice for Horse to the Year was Forego.

Forego’s victory in the 1976 Marlboro Cup at Belmont Park was nothing less than sensational. Without question, it’s one of the greatest performances by a Thoroughbred in American racing history. I highly recommend that you watch the race.

Forego was burdened with 137 pounds. He had to spot 18 pounds to a quality foe in Honest Pleasure. The track was sloppy.

BloodHorse writer William H. Rudy, in his Marlboro Cup recap, called Forego’s victory “awesome.”
“It was the essence of Thoroughbred racing -- a great horse, more heavily burdened than at any time in his career, straining to catch a younger horse who also was running the race of his life,” Rudy wrote.
Forego won 34 of 57 lifetime starts and earned $1,938,957. He was inducted into the national Hall of Fame in 1979.

The Eclipse Awards were established 50 years ago. The 2020 Eclipse Award recipients will be announced Jan. 28 on TVG, Racetrack Television Network and various streaming outlets.

Ballots for the 2020 Eclipse Awards were disseminated to voters earlier this month. Below is how I filled out my official ballot:

My 1-2-3 Horse of the Year votes exactly mirror the 1-2-3 ranking in the final NTRA Top Thoroughbred Poll following the Nov. 6-7 Breeders’ Cup at Keeneland.

Authentic finished first or second in each of his seven 2020 starts (five wins, two seconds). His campaign was highlighted by Grade I wins in the Haskell Invitational at Monmouth Park, Kentucky Derby at Churchill Downs and Grade I Breeders’ Cup Classic at Keeneland. The Kentucky-bred Into Mischief colt also won the Grade II San Felipe Stakes and Grade III Sham Stakes, both at Santa Anita Park.

Even though Authentic did not win the Grade I Preakness Stakes at Pimlico, he ran an admirable race in defeat. He finished second, losing by a scant nose to the filly Swiss Skydiver.

Improbable, a 4-year-old, finished second behind 3-year-old Authentic in the BC Classic. If Improbable had won that race, he probably would be the favorite to be voted 2020 Horse of the Year instead of Authentic.

Authentic and Improbable were two components in a stellar 2020 for trainer Bob Baffert.

I expect Brad Cox to be voted the 2020 Eclipse Award for outstanding trainer. He had a terrific year, no doubt about it. He did an outstanding job to engineer a four-for-four 2020 campaign by Monomoy Girl, who did not race at all in 2019.

Monomoy Girl won this year’s Grade I BC Distaff. It was one of four 2020 Breeders’ Cup victories for Cox, a remarkable feat to be sure. Cox also won the BC Juvenile Fillies Turf (Aunt Pearl), BC Juvenile (Essential Quality) and BC Dirt Mile (Knicks Go).

Cox tied Richard Mandella’s record for a trainer of four wins at a Breeders’ Cup. Mandella, though, registered all four of his Breeders’ Cup wins in one day at Santa Anita in 2003. There were 14 Breeders’ Cup races this year, compared to eight in 2003.

Yes, Mandella won half of the Breeders’ Cup events contested in 2003 -- Juvenile Fillies with Halfbrided, Juvenile with Action This Day, Turf with Johar (who dead-heated with High Chaparral) and Classic with Pleasantly Perfect.

While Cox deserves credit for his four Breeders’ Cup wins this year, it’s not as if Baffert blanked. Baffert won the big one, the BC Classic, with Authentic, as well as the BC Filly & Mare Sprint with Gamine.

Baffert topped all trainers in 2020 with 16 Grade I wins (a total that would be 17 if Charlatan had not been disqualified from the purse in the Arkansas Derby for a medication violation, a decision that is being challenged).

Not only am I voting for Baffert because of his number of Grade I victories, he won the most coveted race in North America (if not the world) in the Kentucky Derby, plus the richest race in the North America, the $6 million BC Classic.

Baffert was strong throughout 2020. He won the $3 million Pegasus World Cup Invitational at Gulfstream Park in January with Mucho Gusto.

Because of the coronavirus, the Kentucky Derby was shifted from May 2 to September 5. On May 2, Baffert sent out Charlatan and Nadal to finish first in both divisions of the Grade I Arkansas Derby at Oaklawn Park. Each division had a purse of $500,000.

Gamine, like Authentic and Improbable, won three Grade I races for Baffert this year. The talented 3-year-old filly registered an eye-popping 18 3/4-length triuimph in the Grade I Acorn Stakes at Belmont Park. Gamine later took the Grade I Test at Saratoga by seven lengths. And then, in her final 2020 start, Gamine won the Grade I BC Filly & Mare Sprint by 6 1/4 lengths.

Based on all that Baffert accomplished in 2020, he received my Eclipse Award vote as outstanding trainer.

I did not even put Cox second on my ballot. I went with Steve Asmussen second, mainly for a rare accomplishment in that he is going to top all trainers in terms of earnings and wins this year.

MY ECLIPSE AWARD CHOICES IN 1976

As mentioned earlier, I first voted in the Eclipse Awards in 1976. These were my selections:

Note: I still have the past performances that accompanied the 1976 Eclipse Awards ballot that was mailed to me.

CHARLATAN’S MALIBU HAS SIMILARITIES TO THE BID’S

On the backstretch in last Saturday’s seven-furlong Malibu Stakes, comebacker Charlatan, sent away at 8-5, found himself one length off the early leader. That early leader was Nashville, the 13-10 favorite.

Charlatan had never been that far off the lead at any point during a race. When some horses find themselves off the pace for the first time, they will not run as well.

But in the Malibu, Charlatan proved that he can win even when he is not in front early.

Nashville went into the Malibu undefeated in three career starts. He had not been fully extended in those three victories, winning by 11 1/2, 9 3/4 and 3 1/2 lengths. But when the real test came in the Malibu, Nashville was no match for Charlatan.

Delp went so far as to say that the Malibu was going to be the best chance Flying Paster would ever have to beat Spectacular Bid.

“I promise you, if Flying Paster does not beat The Bid in the Malibu, he’s never going to beat him,” Delp said.

Despite being said to not be fully cranked and despite just cruising home late when geared down by jockey Mike Smith, Charlatan won the Malibu by 4 1/2 lengths. He posted an excellent final time of 1:21.50. The main track last Saturday was slower than when Spectacular Bid won the Malibu.

In the case of Spectacular Bid, despite being said to not be fully cranked and despite just cruising home late when geared down by jockey Bill Shoemaker, he won the Malibu by five lengths. Back before races were timed in hundredths, Spectacular Bid’s final time of 1:20 shattered the track record of 1:20 3/5 set by Imbros in 1954 and subsequently tied by Jacinto in 1965, Lightning Mandate in 1975 and Beat Inflation in 1977.