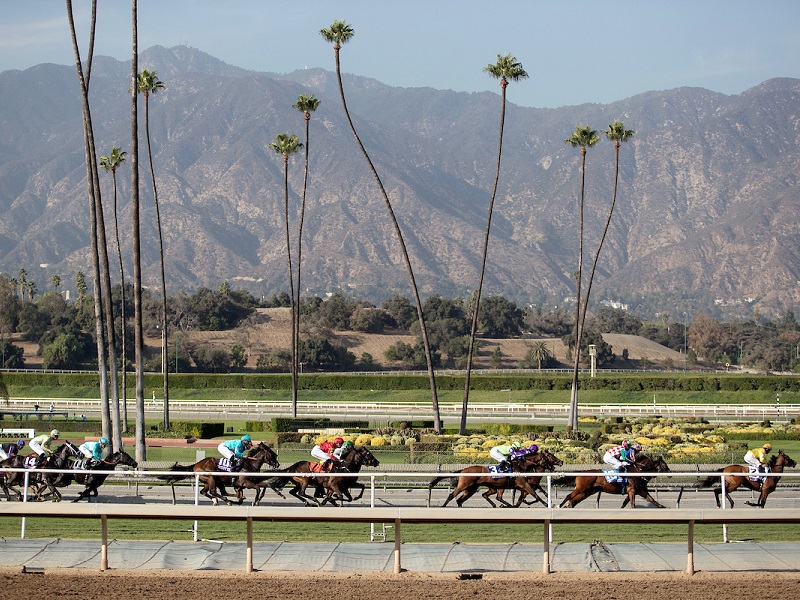 Forecast: The Saturday opener is a difficult turf router for older maidens. Spread as deeply as you can afford to. On Easy Street draws the rail and could be on or near the pace in a field without any known speed. In the frame in his last three starts and with speed figures that fit, the son of Street Boss may be as good as any. Frasard is a 15-race maiden and therefore not one to trust, but on pure form he’s a major contender after finishing second in a similar affair at Del Mar in late November when winding up a little more than a length in front of our top pick. Mulholland Highway is a one-paced grinder but he’s only had four starts and therefore may have a bit more upside then some of the other more exposed runners. The N. Drysdale-trained gelding picks up F. Prat and should have enough tactical speed to be within range throughout. Uncle Ray trains like he’s a bit better than his form suggests so at 6-1 on the morning line he probably should be tossed in somewhere as well.

Forecast: Let’s concentrate on the two main players stretching out for the first time. Coalinga Road has rising speed figures, a good inside draw, and is by the right sire (Quality Road) so we’re expecting this C. Gaines-trained gelding to continue to move forward. Third in a pretty quick sprint at Del Mar in late November, the newly-turned 4-year-old could find himself in the role as the controlling speed if that’s the strategy they choose to employ. Tizhotndusty has sprint figures that make him fairly competitive and based on pedigree the son of Unusual Heat seems likely to handle the stretch-out in trip. With a break in the weights, he should have every chance to secure a good stalking position. Both should be included in rolling exotic play with preference on top to Coalinga Road.

Forecast: Stressed is a first-timer vanning up from San Luis Rey Downs with what looks to be just an okay series of drills on her resume, but we have a hunch she’s a lot faster than those final times might indicate. The daughter of Goldencents brought $110,000 at the Timonium 2-year-old in training sale last year after smoking a furlong during the preview session in 10 seconds flat, so In a field in which the known element doesn’t inspire, let’s go with this debut runner on top and hope to get close to her morning line of 5-1. Freedom Flyer isn’t particularly fast on speed figures but she’s shown enough to warrant some consideration. The daughter of Constitution adds Lasix for the first time and projects to be properly situated on or near the pace. Stressed gets the main punch but we’ll include this S. Callaghan-trained filly on a ticket or two as a saver.

Forecast: We’ll go three-deep in this optional claiming sprint for fillies and mares while preferring Little Miss Ellie on top. The V. Cerin-trained daughter of Richard’s Kid graduated in her third career start during the fall meeting, doing so in clever style after overcoming a bit of early trouble. She lands the cozy outside post, retains F. Prat, and should settle in just behind the leaders before launching her bid. Flat Out Joy broke her maiden over this main track three runs back, and despite being off the board in a pair of subsequent outings she has speed figures that put her in the picture. Raneem has trained well for her return, is protected off the layoff in what can be taken as a sign of confidence and could be a bit better type this time around for Baffert.

Forecast: This maiden 3-year-old filly grass sprint looks inscrutable. Anything goes. K P Kan Do is bred to win early and like turf (Kantharos), and with F. Prat aboard she has the look of a live newcomer, her moderate work tab notwithstanding. At 6-1 on the morning line, she may be as good as any. Katerini had an outing during the fall meeting which wasn’t too bad, a fourth place finish in a productive race. She gets Lasix and blinkers today, so improvement certainly is possible. We’ll try to get by using just these two in a race that might be best avoided.

Forecast: Tizamagician has preferred to run second more than win so far in his career but the newly-turned 4-year-old colt continues to impress in the a.m., and as a son of Tiznow should make a better older horses than he was as a 3-year-old. Back at a middle distance after finishing a distant second in a mini-marathon during the fall meeting, the R. Mandella-trained colt projects to draft into a comfortable pace-stalking position and be tough to contain from the quarter pole home. Mandella’s other starter, Kandarel, adds blinkers and tries dirt for the first time in his career. He’s looked especially sharp in the morning on the main track to indicate he’s ready for a career top effort, and while he’s tackling older foes for the first time and needs a boost in the speed figure department, we’re pretty sure he’s better than his 20-1 morning line indicates. Paladar can be brilliant when he gets to control the pace but is something less than that whenever he can’t. After demolishing an out-classed starter’s allowance field at Del Mar in gate-to-wire fashion with a huge speed figure, the son of Street Cry tries tougher second-level allowance foes while likely to face considerably more pace pressure. On the chance that he can clear the field – not a slam dunk but certainly a possibility – we’ll include him in our rolling exotics.

Forecast: Count Again, a six-year-old with just eight career starts (and four wins), was spectacular in his first outing since joining the P. D’Amato barn in late November when unleashing an exceptional turn of foot to win the Seabiscuit H.-G3. Based on that initial impression, we expect he’ll become the premier turf performer on the West Coast in 2021. Probably most effective at a middle distance, he can lay back and then blast home again, though he’s likely to have to rally into the teeth of slow splits. We doubt an unfavorable pace scenario will deter him, so at 2-1 on the morning line he’s a strong win play and rolling exotic single.

Forecast: Life Is Good is 2/5 on the morning line, so obviously there’s no sensible wager available, but it’ll be fun to see how this son of Into Mischief progresses as he takes another step towards potential greatness. Following his runaway romp in his debut at Del Mar in late November, we suspected the B. Baffert-trained colt would quickly develop into the best colt in his crop, and everything he has done in the morning since that race has done nothing but reinforce that opinion. He could be the next American Pharoah or Justify for B. Baffert, big words to be sure. We’ll see.

Forecast: Where’s the speed in this six furlong turf sprint for second-level allowance older horses? There doesn’t seem to be any, so if you can pinpoint the controlling speed in this race you may have solved it’s riddle. Ultimate Bango used to have some early zip and maybe in this spot he’ll show it. Back on grass for the first time since being beaten a head in a Cal-bred sprint stakes during the fall season, the veteran gelding seems as a good as any so we’ll put him on top at 5-1 on the morning line. Mesut was scratched out of the Joe Hernandez S.-G3 yesterday for this considerably easier spot and the C. Gaines-trained gelding has form that makes him a strong contender, though at age seven he shows just two career victories from 16 lifetime outings, making him a hard one to trust. Sparky Ville is winless in five prior outings over the local lawn but he did earn a triple-digit Beyer speed figures when nosed out in the Dayton S.-G3 over this course last spring. He’s back with “win rider” M. Smith and projects to be forwardly placed throughout. These are the three we’ll be using in our rolling exotics but you may be tempted to include a few more if your budget allows.