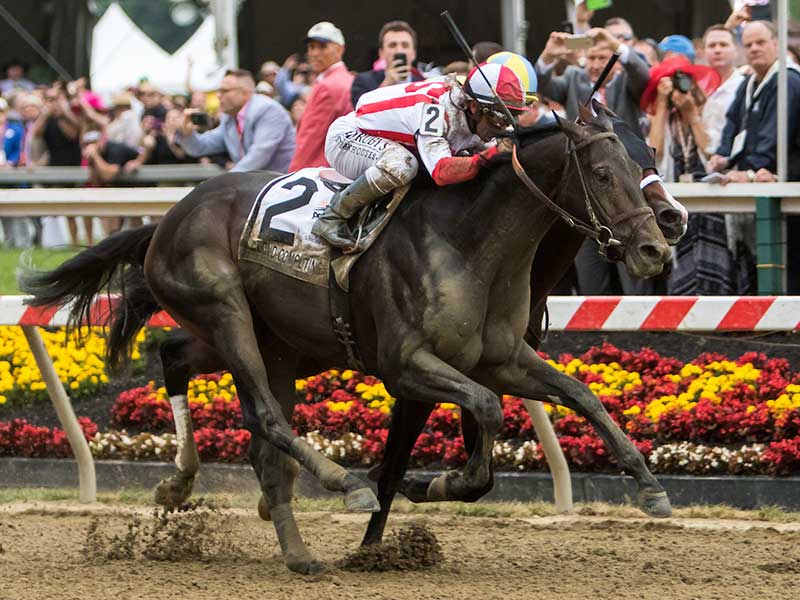 Cloud Computing’s determined stretch drive past Classic Empire in the 2017 Preakness was exciting, but not necessarily what a majority of 140,000 on-track attendees and millions of television, mobile and online viewers expected.

Fans itching for a Sunday Silence/Easy Goer-type Preakness duel between Kentucky Derby winner Always Dreaming and reigning 2-year-old champ Classic Empire weren’t disappointed, though. They witnessed a genuine horserace. ‘Computing and ‘Empire traded meaningful strides in the lane…mud-covered hoof to mud-covered hoof. And, as we used to say in the schoolyard, ‘A fight’s a fight’--no matter the combatants.

In just his fourth lifetime start, Cloud Computing, honed to perfection by trainer Chad Brown, validated connections skipping the Kentucky Derby in lieu of a shot at Preakness glory. That’s something you don’t often see: Connections with a healthy, Kentucky Derby-eligible 3-year-old declining a shot at roses!

Each season from January until the first Saturday in May, it seems the only thing that matters to proprietors of living, breathing 3-year-old male Thoroughbreds is earning qualifying points toward spots in the Kentucky Derby starting gate.

The Preakness winner accomplished that goal, but connections, particularly Brown, known for expertise with fillies and mares on turf, didn’t think ‘Computing was quite ready for the challenge. And, by all estimation, they were correct. With just three lifetime races, all at Aqueduct—a first-out maiden win in Feb.; a second in the Grade 3 Gotham and a third in the Grade 2 Wood—throwing the son of Maclean’s Music immediately into the Derby would have been like feeding him to the wolves—19 of them to be exact.

There’s also the whole ‘Apollo Curse’ thing that decrees: No horse has won the Kentucky Derby without having raced as a two-year-old since Apollo in 1882! Cloud Computing would have had to buck that trend or, as some call it, ‘coincidence.’ Since 1882? I’d call that a rather BIG coincidence. Rava, a character from a Seinfeld episode would disagree. As she emphatically explained to Elaine during an elevator ride, “That’s what a coincidence is! There are no small coincidences and big coincidences!”

Of course, if your horse is eligible to start in the Kentucky Derby and you pass on the opportunity to compete in the race and your horse subsequently defeats the Derby winner and everyone else in the Preakness…don’t you wonder—even if just for a fleeting moment—what could have been? A shot at the Triple Crown? Racing royalty? One of a mere baker’s dozen to ever to turn the trick? Just the second horse to do it in nearly 40 years?

Apparently, in an effort to avoid even the slightest hint of regret, Cloud Computing’s connections have announced that he probably will skip the Belmont Stakes. That’s perfectly understandable. You can’t lament not winning the Triple Crown when you don’t even compete in two legs of the thing.
Following his eighth-place Preakness finish, Derby winner Always Dreaming also seems a Belmont ‘no-show.’ He and Cloud Computing will catch the third leg of the Triple Crown on NBC from the comfort of stalls AT BELMONT PARK! That’s right. Winners of two legs of the Triple Crown are a mere stone’s throw from where Secretariat won by 31 and stopped the timer in 2:24 and they’re staying in the barn. For Tom Durkin’s sake, the Belmont’s in their backyards. They don’t even have to ship to compete. No jet, no van, no trailer hitched to a Dodge RAM truck. They’re forfeiting a ‘home game.’

As the kids say, ‘Whatever.’ For the rest of us the show must go on! Especially in the Big Apple. Besides, I haven’t sung “Theme from New York New York” in at least a year.

The pre-Preakness spotlight, which appropriately had centered on Derby winner Always Dreaming and trainer Todd Pletcher, shifted after the race toward victorious Cloud Computing and conditioner Chad Brown. Of all possible combinations of trainers to win the Derby and Preakness, is it mere ‘coincidence’ to see Pletcher yield center stage to Brown? Or, does the Preakness upset signify a subtle shifting of the guard among trainers-- from Pletcher, who will turn the big ‘five-oh’ June 26, to 38-year-old Brown?

Last summer, after finishing second to Pletcher in five consecutive seasons, Brown finally surpassed that rival as Saratoga’s leading trainer. As if to punctuate his achievement, Brown saddled a Spa record 40 winners. Pletcher, who had won an incredible six consecutive titles there and an amazing 12 overall, was runner-up with 31 wins. To illustrate how dominant Brown and Pletcher are in upstate New York it should be noted that Kiaran McLaughlin finished third with just 13 winners!

On the national stage Brown also has emerged as a major player in another category previously dominated by Pletcher. In January, Brown accepted his first Eclipse Award as the nation’s top trainer. Bob Baffert and Mark Casse were finalists for the award that Pletcher has won seven times, including a stretch of four in a row!

Conquest Mo Money broke slowly in the Preakness and then didn’t fire at all. Lookin At Lee, rail-run dream trip recipient in the Derby, loomed briefly in the Pimlico stretch, but ran out of punch and was passed late by Senior Investment for third. They both should appreciate the mile and one-half distance.

While it’s too early to make a definitive Belmont prediction, we were impressed with Tapwrit’s effort in the Kentucky Derby. In the five weeks since, if he’s developed at all…lookout. Oh, by the way, Todd Pletcher is his trainer. What a coincidence!