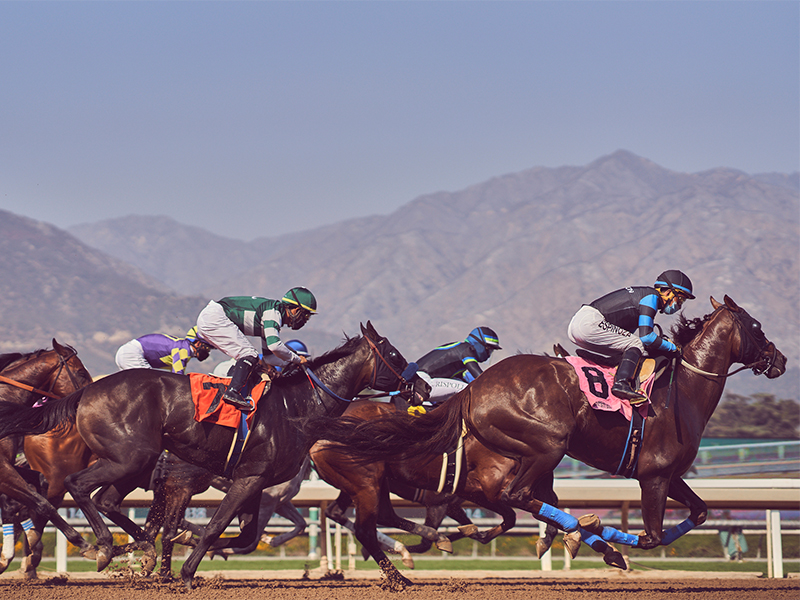 Forecast: Fly to Mars was overmatched in the Cal Cup Turf Classic but returns to a proper level and is reunited with “win rider” F. Prat. The veteran former stakes winner projects to draft into a comfortable pace-stalking trip – similar to the type of journey he enjoyed when winning over this course and distance two runs back – and then have every chance to seal the deal when the pressure is turned on. Prodigal Son has the classic two-sprints-and-a-stretch-out pattern following a long layoff, and with significant class drop and a prior win over the local lawn the D. O’Neill-trained gelding should display enough improvement to be a factor. Both should be included in rolling exotic play with preference on top to Fly to Mars.

Forecast: This looks like a much stronger than average race for older straight maiden fillies and mares with at least three of seven entrants deserving of strong consideration. Bye Bye Miss Pie, bet down to 50 cents on the dollar in her debut last month, was off poorly, rushed up to establish the pace and then paid the price late when worn down in the final stages to wind up second in a fast, highly-rated race. The daughter of Maclean’s Music retains F. Prat and seems certain to find herself as the controlling speed if she leaves with her field. Reem, away for almost a year, returns for B. Baffert with a strong series of drills that should have her fit and ready. In the frame in both of her starts in what turned out to be stakes-quality competition, the daughter of Danza seems likely to settle in the second flight and then have dead aim from the quarter pole home. Angel of Freedom, off slowly and then a respectable third behind two very good fillies in her debut during the fall season, returns for J. Shirreffs with a solid series of easy workouts and could easily be better than shown. Assuming she breaks well today from her comfortable outside post, the daughter of Flatter can be expected to draft into a good stalking position and have clear sailing throughout.

Forecast: Let’s take a stand with Disko Fever, a recent maiden winner over this course while earning a speed figure that makes her tough right back. The daughter of Tom’s Tribute is facing more early speed today but strikes us as the type that can settle into a stalking position and then respond when called upon if the race flow dictates. The R. Baltas-trained filly shows a healthy work tab since raced, so in what will be just her third career start there’s every reason to expect another forward move. We’ll make her a single in rolling exotic play but not take much less than her morning line of 9/5 in the win pool.

Forecast: American Theorem won his debut in the summer of 2019 so we know he can fire fresh, and the son of American Pharoah has trained like he’s fit and ready for his first outing since finishing far back in the Rebel S.-G2 almost a year ago. Perhaps most effective sprinting, he lands the cozy outside post in this seven furlong entry-level allowance dash, picks up F. Prat, and should enjoy a soft stalking trip. Exaulted is worth using as well despite being a maiden tackling winners. The son of Twirling Candy finished a strong runner-up to undefeated Nadal in his sprint debut here last year and then failed as the heavy favorite in a pair of subsequent route tries, mostly recently in late December at even money to next-out winner Mastering. Back around one turn today for a barn that boasts strong stats with the route-to-spring angle, the P. Eurton-trained colt is strong in the speed figure department and looks dangerous from off the pace.

Forecast: Here’s a spread race, a mile grass grab bag for restricted (nw-2) $25,000 claimers. Boru, off the track since August of 2019, returns for an outfit that has good stats with layoff runners and attracts top turf rider U. Ripsoli. Capable of winning on the front end but versatile enough to be effective as a closer when the situation dictates, the V. Cerin-trained son of Curlin sports a work tab that should have him fit enough and numbers that are more than good enough to win at this level if he returns as well as he left. Armour Plate is 1-for-20 in his career and certainly isn’t one to trust, but the P. Miller-trained gelding shortens up a furlong, has numbers that fit, and turned in a recent sharp workout that indicates he’s on edge. The son of Into Mischief will be on or near the lead throughout, and in a field lacking in effective closers might be able to stick it out. Hard Count, another one not known to be very generous under pressure, arrives from New York after a freshening and also has worked nicely to indicate he’s ready for a good effort. The R. Falcone, Jr.-trained gelding should be forwardly placed throughout and has speed figures that make him a fit at this level.

Forecast: Tiger’s Song has finished second in each of his last three starts, most recently when a decent runner-up for this maiden $20,000 price here last month. Not much more will be needed to graduate in this weaker-than-par race for the level. He’ll need some good racing luck from the rail at this six furlong trip but with clear sailing may be capable of producing the last run. Fast Coupons, lightly raced with room to improve but beaten at 20 cents on the dollar in a mixed breed race at Los Alamitos last month, should have clear sailing and every chance from his outside draw and is likely to enjoy an easy pace-pressing trip. These are the two we’ll be using in our rolling exotics but if you feel the need to spread deeper, go right ahead.

Forecast: She’s Our Charm exits a pair of graded stakes races – she ran well in both – and today returns to the second-level allowance ranks seeking a confidence-building win in a competitive mile grass affair for fillies and mares. Always most effective on the front end and likely to be the controlling speed once again, the daughter of Candy Ride is a two-time winner over the local turf course and owns a distinct edge in the speed figure department. Tapwater deserves strong consideration as a back-up in rolling exotic play. The daughter of Tapit, freshened since the fall and training quite well for R. Mandella (superior with layoff runners), has been started and stopped on a few times during her career but on her best day poses a threat.

Forecast: This restricted (nw-2) $12,5000 middle distance affair looks messy, so we suggest you include as many as your budget allows. Czechmight shows a sharp series of workouts at San Luis Rey Downs to have him fit for his first start since October and the son of Street Sense may display considerable improvement for the clever R. Baltas barn. With the blinkers off angle and a pace projection that favors in his pace-pressing style, the lightly-raced gelding seems set to leave his previous form behind. Street Behavior, second off the claim for S. Miyadi, was a non-threatening fourth at Golden Gate Fields in a tougher spot last month and could easily wake up against this level of competition. On pure numbers he’s right there with these. Next Revolt is a first-time gelding and that alone gives him a right to display improvement. He’s run well under F. Prat in the past and should settle into a second flight, stalking position and then have dead aim from the quarter pole home.