Get the Belmont Guide 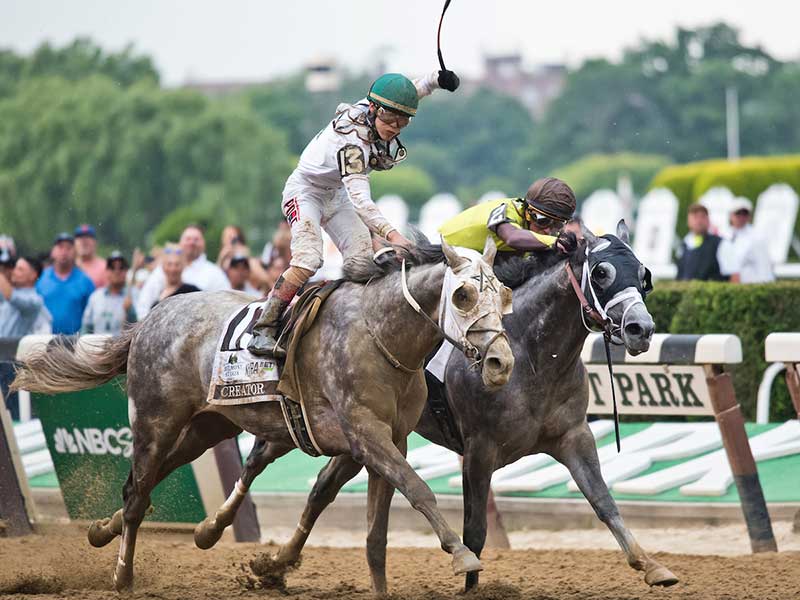 The third and final leg of the 2017 Triple Crown is on the horizon next Saturday, June 10 at Belmont Park and no Triple Crown will be on the line. That’s OK with this guy. Racing’s most coveted title is one of the few professional sports honors not presented annually. It’s bestowed purely on a ‘need-to-be-great’ basis. Reserved for those who win it the old fashioned way…it’s earned!

Only special Thoroughbreds can turn the triple play and neither this year’s Derby winner Always Dreaming nor Preakness hero Cloud Computing will claim such distinction. Heck, they’re not even bothering to show up for the Belmont and it’s in their backyards. They’re fine animals, no doubt, and we anticipate they will have wonderful careers as Grade 1 performers and sires, but that’s it. They haven’t pledged into the Triple Crown fraternity. Proven worthy. Extra special. Kissed by racing gods. A dozen is all we have.

Is sweeping the Kentucky Derby, Preakness and Belmont Stakes a feat that makes a horse great, or does it take a great horse to win the trio of races? I think the latter.

Many outstanding horses have come close to sweeping the series only to fail in the final stage—the Belmont Stakes. Some, like Smarty Jones, survive until the very end, hopes dashed in the final, grueling yards of the most demanding of all championship series. Others, like Big Brown, can’t even make it that far—they win the first two and then crack in the Test of the Champion. Why? Who knows? There are stories of what has happened along the way to this one or that one, but the truth is much simpler: Whatever weakness an otherwise seemingly invincible 3-year-old might possess, three taxing races in five weeks culminating in a mile and one-half slugfest around Big Sandy will expose it.

After a 37-year drought, American Pharoah revived the thought that one of the most challenging achievements in all of sport still is attainable. He swept the Kentucky Derby, Preakness and Belmont Stakes emphatically, easily, like breaking sticks. He was great because he won the Triple Crown, but he won the Triple Crown because he was great! We knew it then, and we know it now. An accomplishment reserved for the very best. Fugazis need not apply.

An amazing 52 times a 3-year-old has managed to win the first two legs of the Triple Crown and then lost the Belmont Stakes. Just 16 times have a pair of those races been won non-consecutively. This season neither of those scenarios applies because the Belmont Stakes won’t feature the winner of the Kentucky Derby or winner of the Preakness Stakes. That hasn’t happened since 2012 when Union Rags, trained by Todd Pletcher, won the Belmont. In fact, it’s only happened four times in the last 25 years.

Followers of Xpressbet’s Free Belmont Stakes Wager Guide know that. They also know that since 2000, Drosselmeyer (2010), Jazil (2006) and Commendable (2000) are the only other horses that have won Belmont Stakes races minus Derby and Preakness winners.
Guide readers also know a lot more interesting Belmont Stats & Trends, too. For example, the shortest-priced Belmont favorite in the last 10 years was the previously mentioned Big Brown at just .30 cents to the dollar. American Pharoah was a better investment at .75 to a buck in 2015, obviously because he won! Since 1940, odds-on Belmont favorites—presumably the most reliable of all favorites--haven’t done that well in the Belmont Stakes with just 13 winners out of 34 starters for a 38% strike rate. That figure ought to be higher. Heck according to the guide, overall starting favorites all-time are 62 out of 148 for a 42% mark!

Classic empire, no doubt, will break from the Belmont gate as the public choice. He’s earned that distinction. He started year as the 2-year-old champ, struggled through a variety of issues during the winter, rallied to win the Arkansas Derby, overcame notable trouble to finish fourth in the Kentucky Derby and then did all the dirty work up front in the Preakness before succumbing to Cloud Computing in the final strides. If that doesn’t make him the starting Belmont favorite you can use me as a chorus girl.

However, and perhaps most importantly, that doesn’t make Classic Empire the winner of the Belmont Stakes.

Look, part of what makes the Triple Crown so difficult to win isn’t just that it’s three grueling races within five weeks…it’s also the stuff comes before the Triple Crown even starts! Training and racing required to get a horse ready or eligible to run in the Derby is taxing—and it’s added to whatever happens during the Triple Crown. In Classic Empire’s case that pre-Derby activity includes another huge effort in the Arkansas Derby April 15—just three weeks before the Kentucky Derby.

The adage says that what doesn’t kill us makes us stronger. You might want to try telling that to Classic Empire at about the eighth pole a week from Saturday. Then again, he might be too tuckered to listen.

What does the Xpressbet Wager Guide have to say about where Belmont winners come from? In the last 38 years there have been 12 veterans of the Derby and Preakness to win the Belmont (31%), 10 Derby participants that skipped the Preakness (26%) and 1 Preakness runner that skipped the Derby (2%). Know which group has won the most Belmont Stakes in the last 38 years? Newcomers. 15 new faces wore blankets of carnations (39%).

You still interested in wagering on Classic Empire at a short price? Yeah, I get it. He’s battled hard this season and has earned my respect, too. But, the real question remains, will he carry our money on his nose June 10?

Do yourself a favor and get Xpressbet’s Free Belmont Wager Guide. Inside you’ll find plenty of expert analysis, wagering strategies, stats & trends and more info than you can shake a stick at. Plus, it’s free. And ‘free’ is unbeaten!