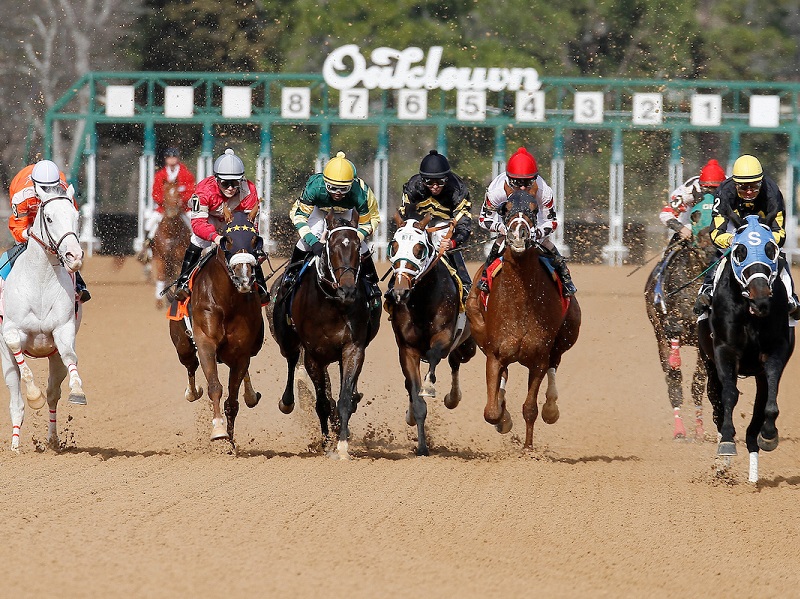 Racing toward the Kentucky Derby on the first Saturday in May at Churchill Downs continues nationwide. Saturday’s main event is the Rebel at Oaklawn Park with 85 total points toward spots in the Derby starting gate on the line. There’s also the matter of $1 million dollars in purse money that will be distributed to the top connections. While there still is plenty of water that needs to run under the bridge between now and May 1, there’s a decent chance that the one to ultimately wear roses is in this race.

This son of Hard Spun hasn’t run a poor race in 4 starts and never has been worse than second with 2 wins. Notably, one of those victories came in his first start as a 3-year-old around 2 turns at Oaklawn in the one-mile Smarty Jones. Caddo River made the lead and continued to widen his advantage throughout. He’s got speed, the rail and a powerful trainer/jockey combo that scores at 26%. Trainer Brad Cox continues his winning ways and jockey Geroux is top notch and knows how to let a speed horse do his thing. Only drawback for this one could be that he hasn’t faced top competition. Will he blink in his first start against worthy foes? Brad Cox-trained horses rarely do. Win Contender.

He’s won his last two starts but hasn’t faced a foe with the talent of #1 Caddo River or #7 Concert Tour. Good news is that he won both races going two turns (at Fair Grounds) and the maiden and allowance races were both as a 3-year-old. He should sit a decent trip behind the previously mentioned pair, and he stacks up reasonably well with the rest of the field, so an in the money finish is possible. Exotics.

This son of Pioneerof the Nile broke maiden last out going 2 turns at Santa Anita when he defeated stablemate Fenway, who failed as favorite in his return. Before that, Hozier finished fourth, double-digit lengths behind trainer Baffert’s other Rebel entrant #7 Concert Tour. Jockey Joel Rosario, who piloted Hozier to his maiden score, departs for the ride on #7 Concert Tour. Hozier should be sitting behind the early and he’s fit and a Baffert. Those factors give him a chance to hit the board. Exotics.

He’s been gone since September, training at San Luis Rey, away from prying clocker eyes. It will be interesting to see if he can continue the fine work delivered at 2. He showed speed to win 2 of 3 starts—one at 5 furlongs on grass and the other going a mile and one-sixteenth on dirt in the Grade 1 American Pharoah. The question with precocious performers is can they can continue to improve, or will others will catch up to them with maturity? Jockey Javier Castellano replaces regular rider Flavien Prat. We’ll need to pass on this colt until we see what kind of transformation he’s made from 2 to 3. He should be close up in the early going and it figures to be crowded there. Pass.

He has 2 wins in 6 starts, the last came in a muddy allowance race at Oaklawn going a mile and one-sixteenth. If the track is ‘off’ Saturday, you could move him up a notch or two. Overall, he will need to step his game up to contend in here. Pass.

This son of Laoban was second first out in a maiden race and then raced against top-notch foes in stakes races for his next three starts. He won the Gr. 2 Kentucky Jockey Club last out in November and was no worse than third in two other Grade 1 races. He has no speed but owns a strong closing kick. His local training regime was interrupted by unseasonable weather in Hot Springs and he skipped the twice-cancelled Southwest, but his trainer says he’s ready to go. Expect #1 Caddo River and #7 Concert Tour to go a decent pace early. That will help set up Keepmeinmind’s closing kick. It’s just difficult to imagine both of these quality front-runners packing it in late. Exotics.

This son of Street Sense has done everything right without being asked. He’s unbeaten in 2 starts and regular rider Joel Rosario has yet to demand he break a sweat. Perhaps, Saturday will be that moment and #1 Caddo River could be the horse that forces Rosario to tap into reserves. This colt worked a sparkling six furlongs at Santa Anita in 1:11 2/5 and then galloped out a mile without missing a beat. He’s a good one. No doubt. Some may question why he didn’t put stablemate Freedom Fighter away with more authority at the finish of the seven-furlong San Vicente. Give Freedom Fighter some credit. He never quit but he wasn’t going to win either. Win Contender.

This son of Dialed In returns to the races for the first time since October. He’s won 1 of 6 starts—a five and one-half furlong restricted stakes race at Lone Star. He finished just behind #6 Keepmeinmind while third in the Gr. 1 Breeders’ Futurity at Keeneland and then forced the pace to be second in the mile and one-sixteenth Street Sense at Churchill Downs. He’s been in the money in 5 of 6 races in a decent 2-year-old season. How much he’s developed will decide how lucrative his fate going forward. He has a couple of nice 5 furlong moves going into this for Hall of Fame trainer Steve Asmussen. Let’s give him an outing to see if he’s matured. Pass.

In Kentucky Derby Championship races there were two major upsets last weekend: Weyburn won the Gr. 3 Gotham at Aqueduct and Helium gassed Gr. 2 Tampa Bay Derby foes. Life is Good was a bit better than ‘good’ as he won the San Felipe as favorite. Saturday, the Gr. 2 Rebel appears likely to go to either #1 Caddo River or #7 Concert Tour. They’re just too strong to ignore.

Which is more likely to win? Great question. There’s really not much between them and neither will deliver a big price. Suggestion here is to wager a few bucks for entertainment’s sake and then watch the race closely looking for clues you’ll want to remember come Derby Day.

Saturday, sophomore runners also will vie in the Private Terms Saturday at Laurel. While the one mile and one-sixteenth test does not award Kentucky Derby points, the race has attracted a field of 7 and could produce a Preakness starter. Below is a horse-by-horse analysis of the race.

This guy has yet to break maiden in two starts at Turfway Park. He was beaten only a neck in his last out at one mile. He would be a surprise. Pass.

Last out this son of Bullsbay sauntered to an easy win in the Miracle Wood going one mile at Laurel. That was around one turn, and this race will be two turns. That might not matter as the gelding is on his game for 31% trainer Brittany Russell. Husband Sheldon Russell is up and he and wins at a 23% pace. Together they hit at 36%. Those are strong stats! Maythehorsebwithu has been either first or second in 6 of 7 starts and that success should continue in here as he will use his early speed and inside draw to the utmost advantage. There is other speed in here, but they will need to hustle to beat him to the first turn. One to beat.

He raced for a $62,5K tag last out in an optional claiming mile at Laurel and led into the stretch. Unfortunately, he couldn’t hang on and ended up second for the second time in five starts, with 1 win. He could add a bit of early spice to the race but doesn’t have enough late to finish the project. Pass.

This son of Super Saver has 2 wins in 5 starts and they both came at Penn National, including a ‘ridden out’ romp by more than 11 lengths last out. Never off the board in 5 starts, this colt may find the water a bit deeper in here. Pass.

Connections of this son of Palace Malice became excited after a strong optional claiming victory at Laurel—more than 7 lengths clear from #3 Shackled Love--and they dispatched this colt to the Big Apple and the Gr. 3 Withers Stakes. He wasn’t disgraced--fourth beaten nearly 10 lengths in the mile and one-eighth race. He’ll be looking to parlay that grinding effort into a payday in the Private Terms. He has little early speed but did close to finish third (placed second) in a 2-turn mile and one-sixteenth Laurel optional claiming race. Between that race and his romping win, he finished third, 6 lengths behind #7 Shackqueenking going one mile at the same level optional claiming race. Exotics.

This son of Kentucky Derby winner Orb brings a 3-race win streak into the Private Terms. He won a maiden $50k claiming race, a $50k optional claiming race and a $62,5k optional claiming race in his last 3 starts. The first two triumphs were at Aqueduct and the last at Laurel. They were all sprint races and runner-up in the most recent start came back to win at the same level next out. Excellorator was claimed out of his most recent race by 16% winning trainer Hugh McMahon who is 25% first off the claim. Can the colt continue his winning ways and deliver a determined closing kick going around two turns? He’s unbeaten on fast dirt, with another win on a muddy Aqueduct oval, and he’s even been in the money in two of three sprint starts at Woodbine over a synthetic surface. Exotics.

This son of Shackleford also tried the Gr. 3 Withers at Aqueduct in his last start. He didn’t fare as well as #5 Royal Number. This guy will appreciate returning to Laurel where he has won 2 of 5 races and never been worse than third. He also has a two turn stakes win at Laurel on the day after Christmas and was third in the 7-furlong Spectacular Bid in January before his nearly 20 length Withers disappointment at a mile and one-eighth. #2 Maythehorsebwithu finished 2 lengths in front of him in the Spectacular Bid. Shackqueenking will race with Lasix for the first time Saturday, suggesting he may have bled in the Gr. 3 Withers. He actually defeated #5 Royal Number by 6 lengths going one mile in December. Exotics.

#2 Maythehorsebwithu is the sharpest tool in this shed and ought to get the job done. Those seeking to boost payoffs ought to use the top choice in exactas with #5 Royal Number, #6 Excellorator and #7 Shackqueenking.

BEAT THE HOST CHAMPIONSHIP ROUND

The Beat the Host Championship is Saturday and qualified participants don’t need to do a thing except to pick as many winners as possible. They’ll be playing for one of seven coveted tournament seats.

The top prize--entry into the 2022 Pegasus World Cup Betting Championship ($6,000 value)--will go to the player who earns the most based on $5 Win wagers on one horse in each of 10 competition races. Finishers in second through seventh positions will earn seats in either the Florida or Santa Anita Derby tournaments ($1,500 value each).

Competition races will be posted by Friday, 5 pm ET.