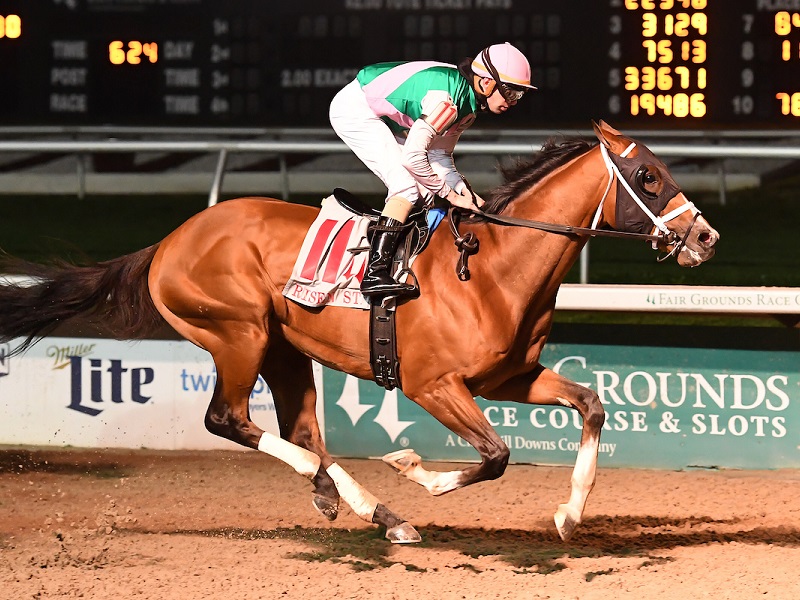 Congratulations to Karen Toyama, narrow winner in Xpressbet’s Beat the Host Championship. Toyama, at $122, proved $.50 better than runner-up Nancy Spense and $7 clear of third-place finisher Roy Brewer. In fourth place, $15.50 behind Toyama, was Christopher Reo. Cynthia Noblitt ($105), Lindy Harton ($103) and Charles Donnelly ($102) round out the top seven prize winners. Toyama has earned a starting berth in the 2022 Pegasus World Cup Betting Championship ($6,000 value) and the other six finishers have earned spots in either this year’s Santa Anita or Florida Derby tournaments ($1,500 value each).

This week’s top 3-year-old race is the Louisiana Derby at one mile and three sixteenths. Below is one man’s humble, horse-by-horse analysis of the race and a suggested wagering strategy.

This Super Saver colt is one of several in here coming out of the Gr. 2 Risen Star. He left the gate from the rail in that race, too, and broke a step slow at 10-1. Behind horses early, he was rank into the first turn. From there he never threatened. That’s a troubled trip, for sure, but there’s also a question of this colt’s quality. He has two previous wins to his credit in two starts, both at Churchill, so he’s probably better than what he showed last out. However, there’s plenty of speed in here, so he may find himself inside and behind horses again into the first turn. If he does clear everyone else to make the lead, he probably won’t be around late. Pass.

He also comes out of the Risen Star (31-1 odds) and showed good speed early in the mile and one-eighth race. He broke well from the far outside 11-hole and was sent forward by jockey Mitchell Murrill. Like #1 Starrininmydreams, he had won both starts before the Gr. 2 Risen Star—route races at Fair Grounds. His only previous defeat came in a maiden sprint. Expect this son of Awesome Again to again break alertly under CJ Hernandez and use his inside post to his advantage. Claimed for $50k out of maiden score, there’s a question of how much talent this one’s got. He’ll be tested in here since he should have company early. He has been working well since his last race—a bullet :59 3/5 and a 100 3/5 are solid. Pass.

Winner of a maiden race last out, this son of Runhappy appears to have upside. First out he was second in a maiden race that propelled both him and the third-place finisher to wins next time out. The Beyer Speed figure for that maiden score was 85 and he’ll need to improve on that to win this race. He took a fair amount of money in his first start and was favored second time out. His running style suggests he prefers to sit just behind the early pace and then come running. That’s the right style for this race but we doubt he can jump forward enough to immediately win this race. This field is deep with competition, so it’s not the ideal place to be forced to improve in a hurry, however, trainer Brett Calhoun isn’t one to overmatch his horses, so Run Classic shouldn’t be completely ignored. Bottom Exotics Only.

Runner-up in the mile and one-sixteenth Gr. 3 Lecomte and in the mile and one-eighth Gr. 2 Risen Star, owners Godolphin are hoping this colt can make a slight forward step at this extended distance. Trainer Mike Stidham is quoted saying this colt will appreciate longer distances. The trainer’s adding blinkers in an effort to get his charge more focused on his task, as his attention seems to wander during a race. #6 Mandaloun and #7 Midnight Bourbon have flip-flopped as top and bottom pieces of Proxy sandwiches. Can he turn the tables on that duo in here? He’s talented, no doubting that. In five races, he’s never been worse than second with two wins. Previously, he’s been content to sit a few lengths off the early speed and then close—just a bit too little, too late. Blinkers are meant to erase shortfalls. He fits in the mix, obviously, and if the equipment change works to focus his closing kick, he could win. Win Contender.

This son of Oxbow will make his first start for trainer Leandro Mora, normally assistant trainer to multiple Kentucky Derby winning trainer Doug O’Neill, who’s serving a suspension. So, other than shipping from California to Louisiana, not much has changed for this colt since he finished a neck short of Medina Spirit in the Gr. 3 Robert B. Lewis at Santa Anita. That afternoon, he and Roman Centurion had dead aim on Medina Spirit in the lane and couldn’t get by. Credit Medina Spirit. But we’re also a bit concerned about Hot Rod Charlie’s determination. Granted, it was the colt’s first race since finishing second in the Gr. 1 BC Juvenile in November at Keenelend, so he could improve. However, at a short price, we’re going to go ‘negative’ on this guy improving on his Lewis effort. Bottom Exotics Only.

This son of Into Mischief was cranked up last out by trainer Brad Cox for a dominant victory in the Gr. 3 Risen Star, a race common to several others in the field. He stalked the early pace while wide, took command and finished well. The victory redeemed a third-place finish to #7 Midnight Bourbon in the Gr. 3 Lecomte, as the only loss on this colt’s resume after four starts. In short, he’s done little wrong. His style is perfect for this race—he relaxes early, just behind the front-runners. There should be ample pace for him to stalk and he’s shown that distance apparently isn’t a concern. It must be noted that #7 Midnight Bourbon and #4 Proxy both have finished in front of favored Mandaloun. However, in that losing effort this colt raced wide around both turns and was making his first start since November. Blinkers were added next out and that resulted in the Gr. 2 Risen Star redemptive victory. He’s the favorite and the one to beat. Most Likely Winner.

This son of Kentucky Derby winner Orb is an interesting piece to the puzzle. He’s made four starts, with two wins—an off-the-turf maiden five and one-half furlong sprint and a six-furlong allowance win. Last out he moved up in class to the Gr. 2 Risen Star while stretching out in distance from six furlongs to one mile and one-eighth. Those are some stiff hurdles to overcome in a fourth start and, while he didn’t clear them easily, he wasn’t badly stymied either. In the Gr. 2 Risen Star, against solid stakes foes, O Besos raced evenly and actually loomed as an in-the-money threat in mid-stretch before finishing fourth, beaten just over seven lengths by #6 Mandaloun, #4 Proxy and #7 Midnight Bourbon—all much more seasoned than him. He tired in the final strides and that was to be expected. This colt has shown that he has some ability. Is he ready to win this Gr. 2, million-dollar stakes race and earn a spot in the Kentucky Derby starting gate? Probably not. But he’s worth a long look in exotics at a big price. He’s got a pesky poor habit of breaking slowly and he’s done it in all four races. Against this kind of foe from the outside post he can’t afford to surrender any ground and a slow break won’t help. His Beyer Speed Figures have improved with each start and will need to jump forward again but he’s got enough promise to anticipate another good race. Use in Exotics.